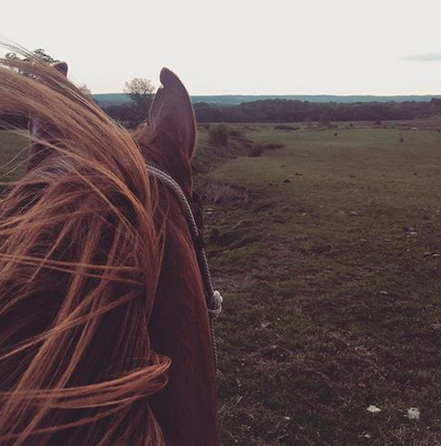 Sunday late afternoon was one of those perfect early-autumn riding days: the sun was warm but the air was crisp, and I saddled up my gelding Red at the end of the day for a routine ride — a late calf had been born just a few days prior, and with the herd currently pastured on a hillside not easily accessible by truck it was much easier for me to ride out to check on the little one’s health and safety. As I rounded a wooded corner and crossed the creek at the outlet of a ravine, Red’s ears flicked forward and he raised his head. Following the point of his ears, I saw ahead of me — on the wrong side of the fence, in a section of woods that we don’t own — a cow, the one we call Little Horns, and two calves staring back at me.

Great. This particular fenceline didn’t have a gate, so it would be up to this vagabond cow and her little followers to figure out how to get back in the way they came out. To due diligence, I called my sister-in-law who was closing up her farm stand down the road and reported.

Kaitlyn must have mulled this one over for a few minutes before deciding that the most responsible thing to do would be to come up and repair whatever spot the cow had slipped through, so twenty minutes later, she roared up the hill in the ATV as I jogged down the fenceline, trying to figure out where our boundary weakness was. The cow stared back at us from the shelter of the trees vapidly, that bovine innocence bland on her face.

“Oh,” Kaitlyn mentioned, almost offhand, “I didn’t see Joe either on my way up.” Joe is our bull, a sinister-looking individual with a thousand-mile stare who is really talented at creeping up behind people in the pasture in catlike silence if they’re not paying attention. If he could, he would probably whisper “boo.” He’s never actually molested anyone, but we’ve tried not to give him the opportunity either. If he were at large, we had potentially much bigger problems at hand.

“Maybe he’s in the bog,” I replied hopefully, referring to a springy section of this pasture choked with goldenrod and a tangle of scrubby trees. I pointed Red down a cow trail that the herd had installed through this knotty bog and let him choose his way carefully until the trail abruptly ended at the fenceline. Remember in the Looney Tunes when the coyote would run through a wall and leave a coyote-shaped hole behind him? Now picture a wire fenceline, with a bull-shaped hole in it. I pivoted Red on the spot and we moseyed back to Kaitlyn and the ATV with this news.

“Let’s get these cows here into the creek section,” Kaitlyn decided, “and hopefully Little Horns will find a way back through the fence. Then we can take the whole herd back through the gate into the old pasture.” The priority now was to get the main body of the herd into more secure fencing, with the hopes that somehow Kaitlyn had missed Joe in the shuffle… as well as the other five or six cows that we could now see were missing.

Kaitlyn roared back down the hill and Red and I picked our way behind her. The “creek section” was a charming hellhole of springs, bogs, thorns and thick tangles of weeds; the center of the so-called pasture was a literal maze of burdock which I had successfully figured out how to navigate a few years prior. Kaitlyn took the main trail with the ATV while Red and I crossed the creek to drive the cattle upstream to the gate. Simultaneously I called my husband and told him to put on his hiking shoes, because we needed some backup. They don’t call it a family farm for nothing.

Red trooped cheerfully through bog and thorn, barely blinking at eye at conditions that normally have him digging in his heels — as long as there’s a cow in front of this horse, he would probably walk through fire; he’s just the kind of horse that has a good work ethic but doesn’t see the point of a scenic trail ride. A thorn — one of those two-inch-long suckers — grabbed the edge of my helmet and gave me whiplash, followed quickly by a branch off a downed tree that snagged one of my reins, but after fifteen minutes of crashing through this mess we finally had the last of the cattle through the gate and into more secure pasture.

“I thought I heard Joe,” I called up the hill to Kaitlyn. The bull has a very distinctive call, kind of like a bugling elk crossed with a really pissed-off elephant. The hair-raising sound had echoed out of the ravine… but he wasn’t among the cattle happily grazing along the fresh rested grass on the creek banks. Red and I splashed back across the creek again to lope up the center of the pasture, thinking for sure we’d find Joe and the missing cows emerging elsewhere from the woods with total disregard for fencelines.

The pasture was empty. I pulled up on the ridgeline looking down into the ravine, where the cattle we had just moved were slowly starting to settle. Across the ravine stood Kaitlyn, visibly shrugging. I turned to ride along the ridge when my phone rang.

“Joe’s right here,” Kaitlyn hissed. “But he won’t come through the fence.”

A classic conundrum: obviously, you don’t want your cattle to learn they can go through fences. But how else do you get your cattle back in when they’ve managed to escape and you don’t have a gate?

I hung up and continued up the ridge. Once again Red’s ears flicked forward and he stopped short as the menacing shadow of Joe in the woods materialized between trees, flanked by some of his most loyal cows. The escapees picked their way up out of the ravine, constantly looking for a loose section of wire to slip back between. Out of the corner of my eye I caught glimpse of Kaitlyn descending into the creek with a bucket of fencing tools as I tracked the herd’s slow progress through the woods, still unable to find a way in.

Just as the cattle rounded the uppermost corner of our pasture, heading into a section of woods that I knew for a fact continued on sans fencing all the way to the next road and from there to the county airport (good lord, please don’t go to the airport, Joe) I saw two trucks entering the pasture — one driven by my husband Erik, the other by the farmer-in-chief, Grandpa Allen. The cavalry had arrived, and hopefully the line of battle was about to be drawn.