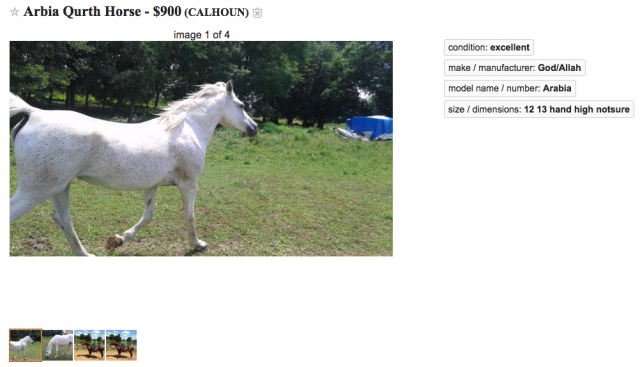 The only things certain in life are death, taxes and Craigslist.

No matter how much we try to promote horse sales sites, Facebook groups or the truly old-school flier on the feed shop bulletin board, it’s a fact of life that horses will continue to be placed for sale on Craigslist. We can cry… or we can try to laugh, while attempting to connect horses with good homes. Don’t forget: while it’s always fun to giggle at classically atrocious spelling and ridiculous photos, we also remind readers that sometimes Best of Craigslist can lead to fairytale endings as well! Click each photo to be taken to the direct ad if it’s still live.

We’ll kick things off with this case of confused identity… are you an Arabian, a Quarter horse, a Quarab or something else entirely? From Patricia: 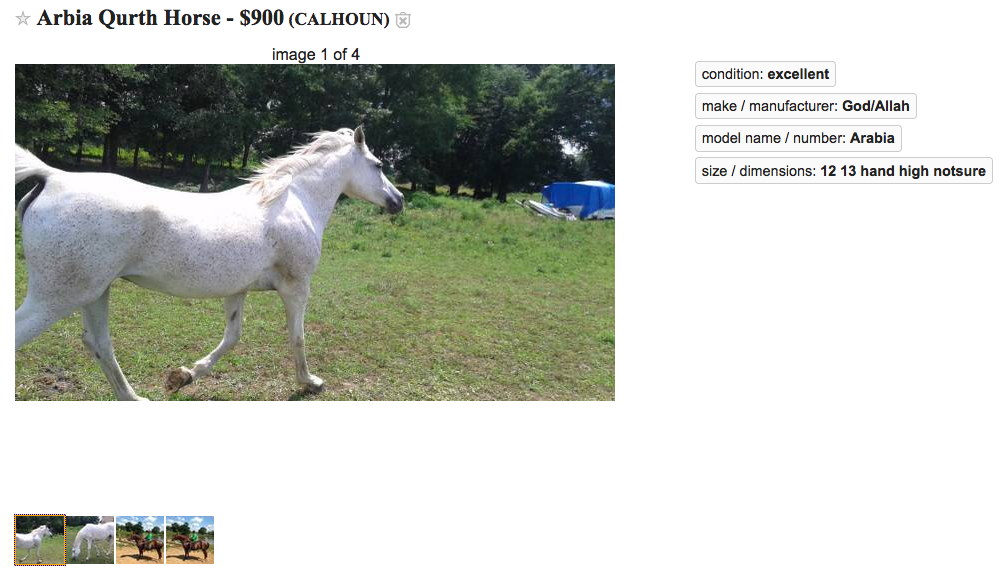 This next one is short and sweet…ish. From Christina, who states “I think this ad was written by someone who thinks they’re sending a telegram and paying by the word rather than posting on Craigslist!” 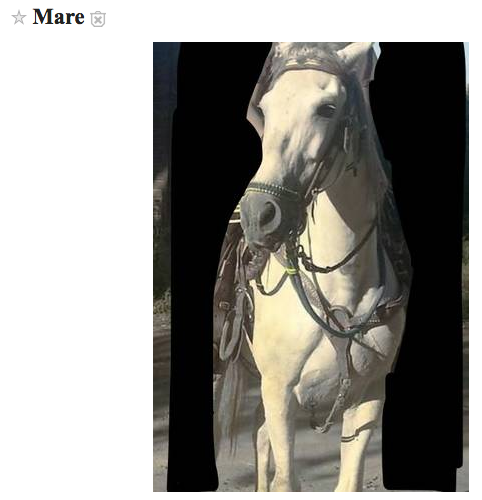 This next ad is well worth the time it will take you to read. This seller’s honesty is killer! From Jessica: 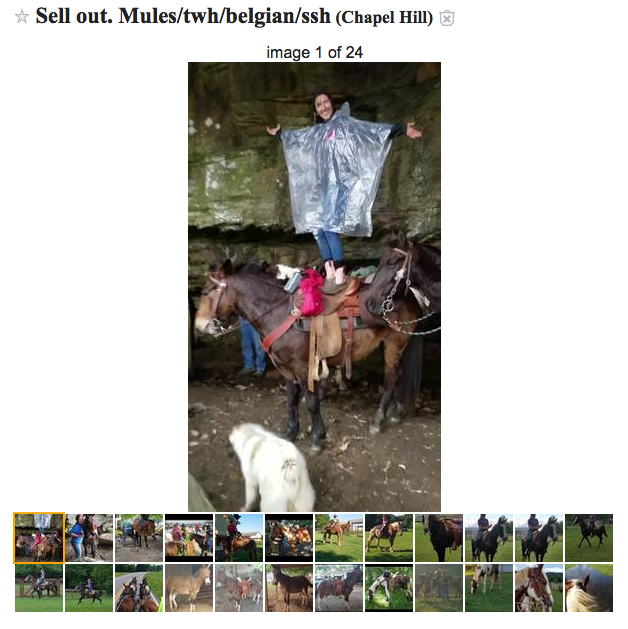 10 Year old bay gelding mule. Never thought I’d sell him but here it is in black and white. Approximately 14 hh. Current coggins. Trimmed yesterday. He’d probably prefer a woman under saddle but I can’t really speak for him. But no man is gonna get on him and “cowboy” him, or they’ll regret it ???? if you ride properly he has no buck, kick, rear, or bite. I’ve ridden 18 beers deep and he’s confidently brought my drunk ass back to the trailer. I’d probably recommend at least an intermediate rider because well, Christ, he’s a mule. And the most LOVING, personable mule you’ll ever meet. Almost guaranteed. Extremely easy keeper, my favorite out of all the riding animals I’ve owned. $1700 firm. I’ll take no less so don’t ask. I’d rather watch him eat until he dies.

19ish (maybe less…) Year old Belgian mare. Can’t tell you a whole lot about her besides she is “supposed” to be broke to drive. I haven’t tried. Rides like a damn dream. She is EXTREMELY personable and catches herself. Like will literally walk up to you and put her head down to be caught. My eight year old can take her anywhere. Pretty sure a bomb could explode in her feed bucket and she’d eat around it. She’s so cool and the PERFECT lesson/kids/grandma/husband horse. Now she does have what my farrier has described as a “low sole” in one foot and favors it occasionally and would benefit from corrective shoeing. And she’s totally 100% worth that effort. Trimmed yesterday. At this moment in life, I’d take $1200 for her, and not a penny less. She’s worth her weight in gold. I almost forgot… Current coggins, 16.3 hh

Next we have a 2009 model twh gelding “Mr. Skylight”. He is registered, but may as well not be because my dumbass put them on the toolbox and drove off. Same with the coggins. I have a picture of the registration if you feel bold enough to conquer such an excursion. Ive ridden him once, as did my best friend. He was hot and nervous but never once was he dangerous. He is pusher bred. He has never bucked, kicked, bitten or reared, but at one point he did what I like to call ” hop up.” He can be a little hard to catch but is certainly catchable. If I had to guess id put 14.2 or 3 on this guy. Great smooth gait. Haven’t had him long enough to offer a whole lot of info…$1200 obo

Registered, flashy saddle mule. 13 yr old I think without looking at the papers. Broke to drive, and supposedly broke to ride but I wouldn’t get on him right this second ???? last driven 6 years ago, basically unhandled since. Trimmed yesterday. Super easy keeper. I can catch him, I don’t know about you….. Timid but not dangerous. No kick or bite. Leads and loads. Stood to be saddled but I haven’t ridden him for lack of round pen. Stands 14hh ish. $700

Last but not least 5ish year old spotted saddle mare that you don’t want because I don’t want to sell lol
I can send videos of any of them. Thanks (besides the spotted mule, no vids, sorry!)