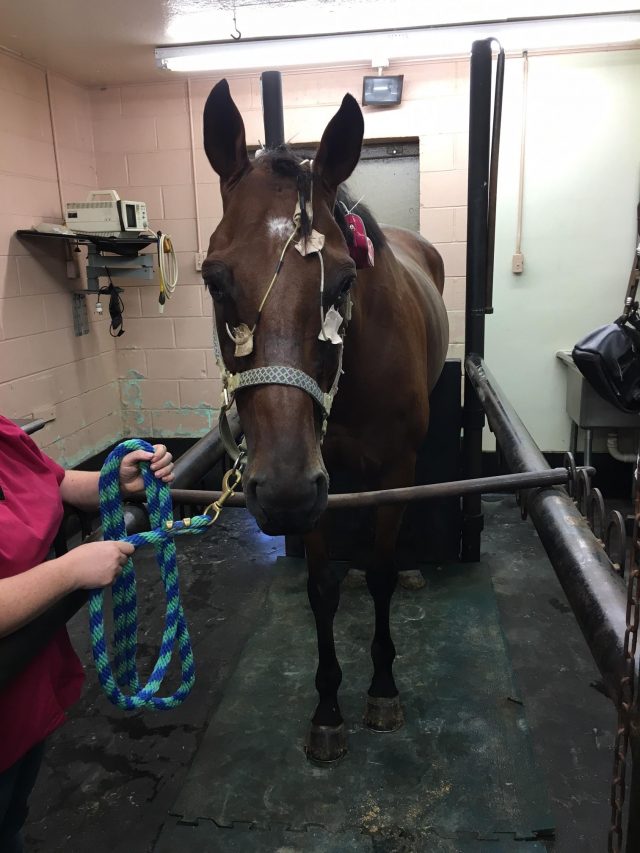 Follow Joey’s journey as he fights to retain his vision.

“Meagan, it’s not good,” my coach said as I clutched my phone in my hand. “You need to call the vet to get the full details, but Joey has ulcers in both eyes and they’re pretty bad.”

My chest felt like someone had dropped a loaded horse trailer on top of it. What I thought was going to be a routine trip to the veterinarian for allergies had turned into my worst nightmare – my horse was hurt. I immediately began reliving the horror of when my previous horse Lance injured himself and the time and money it took for him to recover. Leg injuries I knew how to deal with; I had no clue what to expect with eyes.

In my years of riding, I had only had one encounter with corneal ulcers which was in a lesson horse at the barn and to be honest, the only thing I knew was that he had a tube sticking out of his eye. So I did my research in hopes that it would bring me peace no matter what the outcome was. This is our journey: this is real life as we fight to retain Joey’s eyesight.

What the heck are they?

Corneal ulcers are pretty much what you would imagine – sores on the eye that can be caused by an injury or bacteria. It appears as if Joey’s began as conjunctivitis, which resulted in him scratching and rubbing at his eyes creating the sores. Corneal ulcers can be hard to see (especially if you are 5’2” and your horse is 17 hands tall….) but can be seen by the naked eye if they are nice and angry and have been hanging out for a while. They are somewhat blue, cloudy spots in the eye, but in their earliest stages it is easiest to see them with the assistance of a dye your veterinarian drops into your horse’s eyes. 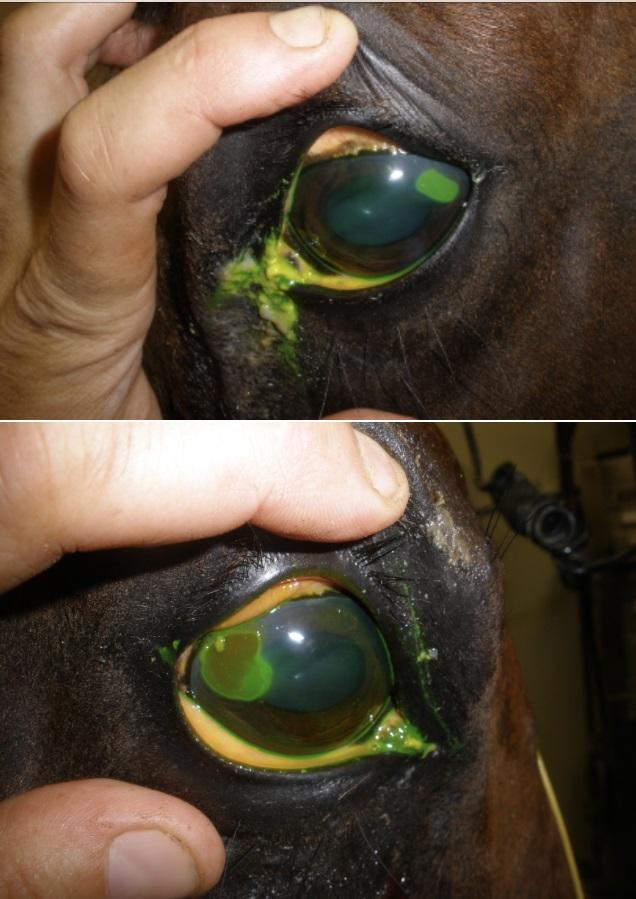 A good look at Joey’s corneal ulcers with the help of some dye. As you can see, one started much larger than the other. They are both about equal size now as the treatment aggravates the ulcers before it begins to heal them. As my vet says, it gets worse before it gets better. Photo courtesy of Huck Equine Clinic in Jackson, MO.

Many horses will only get it in one eye, but Joey doesn’t like to do anything [email protected]$$ so naturally he has them in both eyes on the outside corners, affecting his peripheral vision. There were no signs other than some swelling in his eyelids and excessive watery eyes starting the last week in June. Several other horses at the barn were also having some watery eyes, so we chalked it up to allergies. When the issue didn’t resolve, we decided to send Joey off to the vet who told us that at this time the ulcers had been around for a lot longer than the symptoms began. Suddenly I realized just what was going on with Joey on our trail ride that I wrote about earlier this week… he couldn’t see. My brave horse had been jumping and going to clinics and even tackled his first liverpool – all with reduced vision.

Lesson #1: don’t mess around with eyes.

Things to be watching for are itching/watery eyes, swelling, redness of the eyes, excessive goop building up in the corners of the eyes and an unusually spooky nature in a normally calm horse. The ulcers can affect their vision, both temporarily and long term, so it isn’t uncommon for a horse affected by one to suddenly become more flighty than normal.

Where do we go from here?

Unfortunately, in Joey’s case we are not only fighting the ulcers themselves but a nasty fungal infection that has thrived in the open sores. This is what can lead to permanent corneal scarring and vision loss, so we had to attack the ulcers and quickly to get the fungus under control.

In some cases, medicines can be applied topically, but Joey needed such drastic care that lavage tubes were placed in each eye to assist with administering medicines. Lavage tubes are inserted either in the upper or lower eyelid (in Joey’s case we did the lower because of the swelling in his upper eyelids). The vet takes a RATHER LARGE needle and creates a hole in the eyelid for the tube to be ran through. The end of the tube that remains in the eye has a flat base. The rest of the tube runs externally up the front of your horses face and will most likely be braided into the mane. With the lavage tubes, medicines can just be pushed through the tube and deposited directly into the eye, much like an IV. 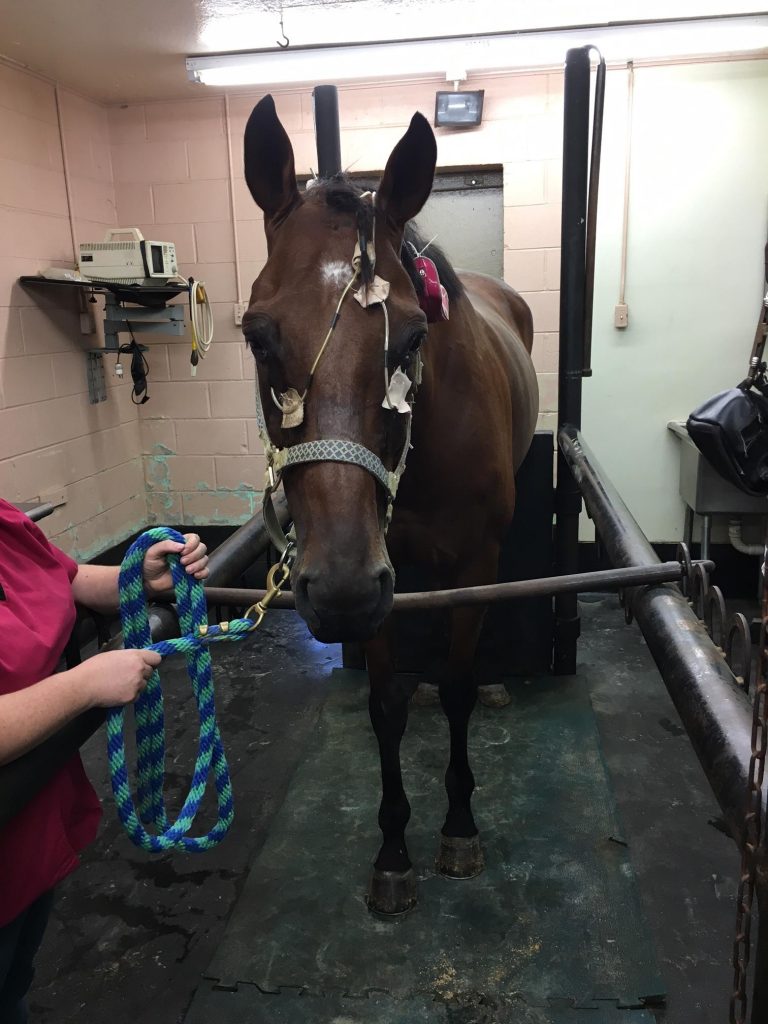 My brave boy showing off his lavage tubes. Warning, if you are faint of heart don’t watch one of these bad boys being inserted. The needle is HUMONGOUS. Photo by Dr. Martha Huck DVM

Joey began receiving multiple different medicines once every hour 24/7. It was apparent that at this level of care, Joey needed to stay in the clinic with hopes that he would respond positively to the treatments and return home when his dosage lessened and only required administering every few hours or so. He received an antifungal, an antibiotic, a pupil dilator, and a serum via the lavage tube.

The serum is a really neat concept. Your veterinarian will draw blood from your horse and will place it in a centrifuge to separate the blood cells from the liquid part of the blood. The remaining serum is given to your horse in an attempt to use his own body to heal himself.

And that wasn’t all. He was also receiving a antibiotic, probiotic, antihistamine, and an anti-inflammatory/pain medicine orally.

The newest step in our treatment plan is to create for him some amniotic stem cell therapy, which can develop into a wide variety of tissues. It is our hopes that this will help promote regrowth of the disintegrating portions of his cornea to limit vision loss.

Lesson #2: anything to do with eyes is not an easy fix and is not a cheap fix either.

The Start of Treatment

Day one and two were tough days for Joe. He hates being confined to a stall and being cooped up and poked and prodded at the vet was not making it any better. He was cleared for handwalking and grazing, only with the use of his special eye mask that blocks the sun. He looked like a robot horse with all of the tubes and bits and bobs hanging out of his mane, but he loved getting to walk around and enjoy the outdoors. 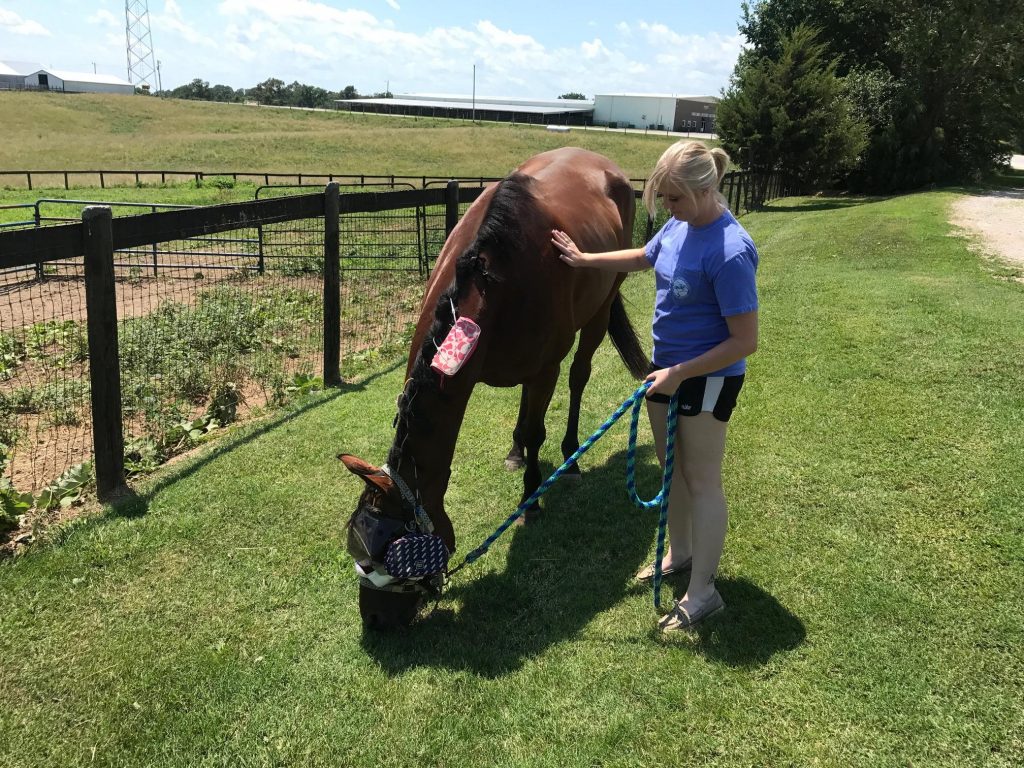 Joey greatly enjoyed some outside time thanks to his protective “sunglasses”. He got to walk around a bit and be entertained by an all too spunky mini pony. The odd looking bags braided into his mane hold the pumps that distribute his medicine overnight so that a tech does not have to administer it every hour of the day. Photo by Wayne DeLisle

My vet warned me that ulcers of this kind get worse before they get better, so after one day of treatment I was shocked to see that one had doubled in size. It was angry, but so was I. One of us was going to die trying and it wasn’t going to be me. That ulcer was going to go far, far away.

On day two a portion of his dying cornea began to slough off and the vet had to debride the eye. I had hoped this was a good sign, but she assured me it was neither good nor bad. Fungus loves dying tissue, but the more fungus that we kill the more cornea will also die. It’s a vicious cycle, but we have to rid the eye of the fungus.

Joey will continue to receive his cocktail of medications in hopes that we can kill the fungus and begin to regenerate the cornea which has already died. IF we can save both eyes (no guarantee at this point on that) then our worst case scenario will be some residual scar tissue that will affect his peripheral vision permanently. I am not getting too worked up about that idea, as he could still be a lower level jumper but wouldn’t be able to make the sharp turns to fences necessary to excel at the upper levels because of his vision limitations.

Worse case scenario, we lose one or both eyes. I am finding peace reading tons of success stories of one eyed horses (like Patch the racehorse!) and of course, Endo the Blind (who had BOTH eyes removed!) is a huge inspiration. However, I know my horse and I know the lifestyle I can provide for him and I fear his future if he were to abruptly lose all of his eyesight. I will worry about the outcome of that scenario if that time comes, but for now I am praying for a horse who can heal with little to no limitations.

My horse is a beast and he is strong, if anyone can get through this, it’s my Joey boy. So we take it one step at a time and enjoy each day as it passes on this journey to save Joey’s sight.

Lesson #3: hope for the best, but prepare for the worst and fight like heck in between.