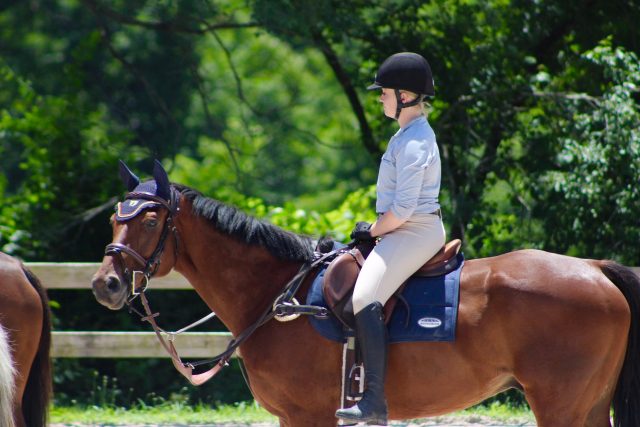 A simple trail ride turned into a potentially deadly situation.

This weekend I had one of those ‘near death experiences’ you always read about online. A pivotal moment in my time as an equestrian that changed my life forever. The more days that pass by from the incident, the scarier the reality of it all gets.

Had I not had my helmet on, I probably wouldn’t be typing this today.

I grew up a backyard equestrian so when I transitioned to jumping I knew helmets were most definitely important. There is a undeniable risk factor involved with pointing a horse at a stick and saying, “hey can you please jump this?” I didn’t, however, understand why I needed one on flat days or trail rides. I mean, come on — did the cowboys wear helmets?

But, as it usually goes, barn rules overthrew my passive feelings towards helmets and I happily donned one for each ride. It wasn’t a conscious decision, it was just a thing I had to do. If I wanted to ride my horse I had to put the helmet on, so I did. Of all of my equipment, my helmet was definitely my most under-appreciated. I drooled over my M Toulouse saddle and my new stirrup irons. Heck, even my custom crop got more attention than the brain protection I wore each day. 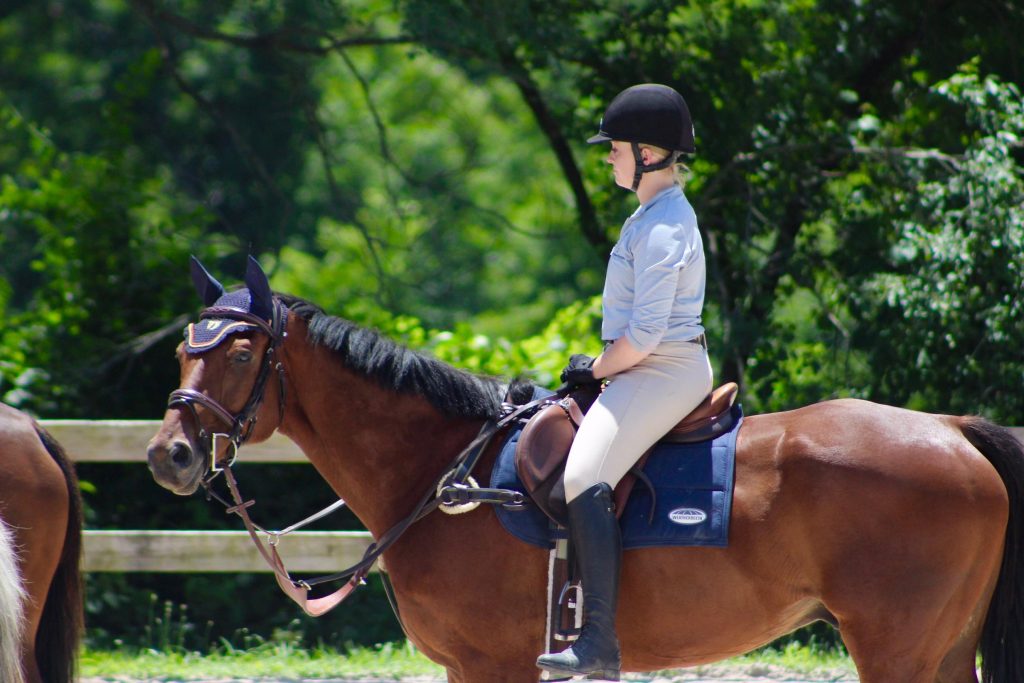 I never argued about wearing my helmet over fences, but why on earth would I need it for a simple trail ride?
Photo by Wayne DeLisle

How quickly that can change.

This weekend, a friend and I went on a post-flat day trail ride through the woods on our barns property. Joey had earned a relaxing ride and I had no hesitation about taking him on the trails which he had seen multiple times before. Always brave, Joey led the way with no arguments. As we neared our last leg of the trail, we had to go down a decline — nothing too steep and nothing new to either of our horses. Joey, the natural leader, walked on without a care in the world.

Something (and we are still unsure as to what it was) suddenly became a concern to Joe and he shot his head up and immediately began backing up rapidly. I patted his neck, turned him in a circle, and talked to him softly and kindly. When he came back to me, we tried to go forward again but received the same reaction.

No big deal. My friend urged her horse forward to be the leader and give Joey a boost of confidence to make his way down the trail. At first, this appeased my big brown chicken and he followed along, alert but not spooked. We made it PAST the original scary spot and all was well when the imaginary monster reared its ugly head again.

Like before, Joey began backing up anxiously but unlike before I no longer had my power steering… I tried to calm him down and get him to turn around, but the only direction he was heading was backwards and as fast as he possibly could. I gave him a little smack on the butt in an attempt to switch the gears from reverse, but he had shut down mentally and was spiraling into a dangerous place. 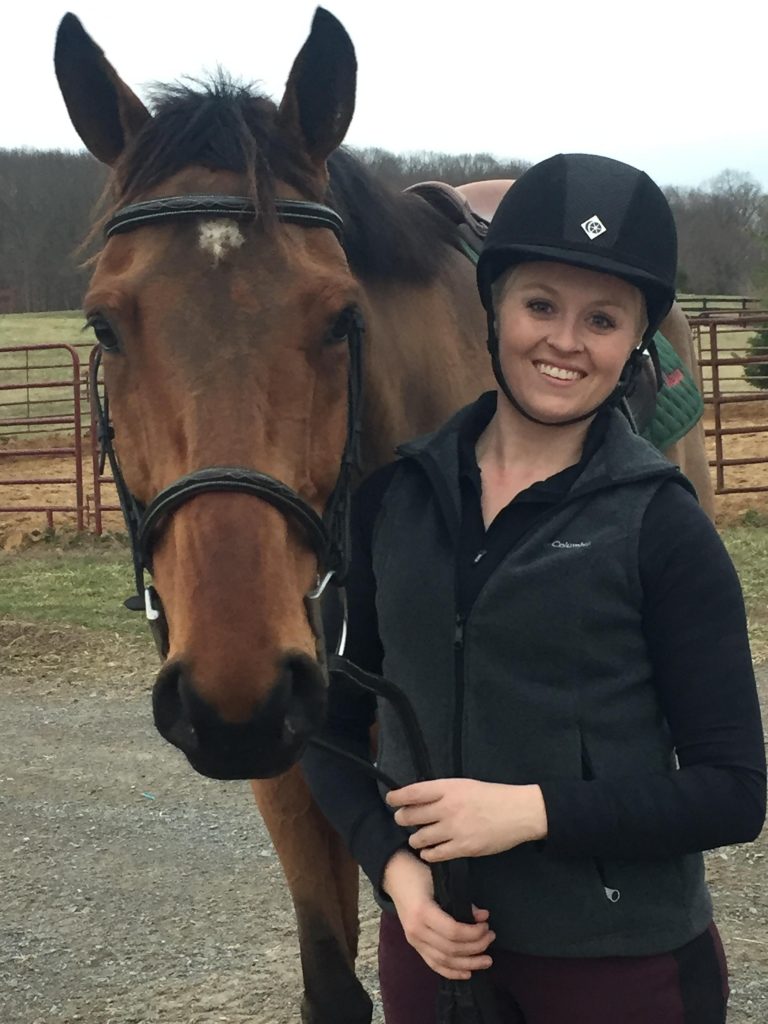 The horse I swore I knew and could predict became unpredictable in a moment of fight or flight. Photo by Luis Perez

He began backing into trees and brush which only elevated his fear. I was at a loss, my normally brave and bold horse was reacting in a way he had never done before and I wasn’t sure what my next step was. He was going so fast that I wasn’t sure I could safely dismount and guide him out of the woods by hand, but when I looked back and saw a deep rocky ravine quickly approaching I knew something had to happen. I made a few last ditch efforts to steer him out of the woods and back to the trail but he was in full on flight mode at this point and I knew my only option was to bail.

I have never been one to enjoy a purposeful emergency dismount. I believe the safest place is on top of the horse and if you are choosing to meet the ground, you better be prepared for the consequences. In this instance, I knew it was safer for me to tumble down that ravine on my own rather than atop my horse. So I bailed.

I know that not everyone believes in a greater being, but I have no doubts that there was someone watching over me that day. The sequence of events that would follow could have played out a variety of ways — with nearly all of them ending with me or Joey on our way to emergency care.

When I dove off of Joey, I halfheartedly held onto the reins in an attempt to keep him from flipping over backwards down the drop. This effort, albeit somewhat dangerous in itself, actually caused Joey to turn so he was facing the ravine and he sort of slid down it face first. Letting go of the reins, I tumbled halfway down the ravine, only to be caught by a nasty thorn bush. The force of my sudden stop resulted in the back of my helmet smacking a large rock. I looked up as Joey fell to his knees at the bottom, but hopped back to his feet and trotted up the other side.

Filled with adrenaline, I pulled the giant thorns from my body (wearing a tank top while riding sounds like such a good idea until your plucking Godzilla-sized thorns from your skin) and made my way back up the incline to meet Joey at the top and keep him from trotting off in fear.

As we walked back to the barn I had yet to process what exactly happened, but my friend was still in shock having seen all of it unfold. It hit me right as I was untacking Joey, we should have been seriously hurt and we weren’t. I cooled Joey down, tended to his minor wounds, tossed him in a small paddock with a friend with some hay and fresh water, and sat down on my tack box, my mind a mess. I slid my helmet off and suddenly remembered hitting my head, so I turned the helmet around in my hands.

There was only a small rub on the back where the rock met my helmet. Knowing the dangers of riding in a helmet with a fall, I pulled out my phone and filled out an accident report on Charles Owens’ website so I could send it back in for research purposes and order a new one. The accident report asked for a description of the event which resulted in the fall and as I pieced everything together I quickly realized what would have happened had I not had my helmet on that day. 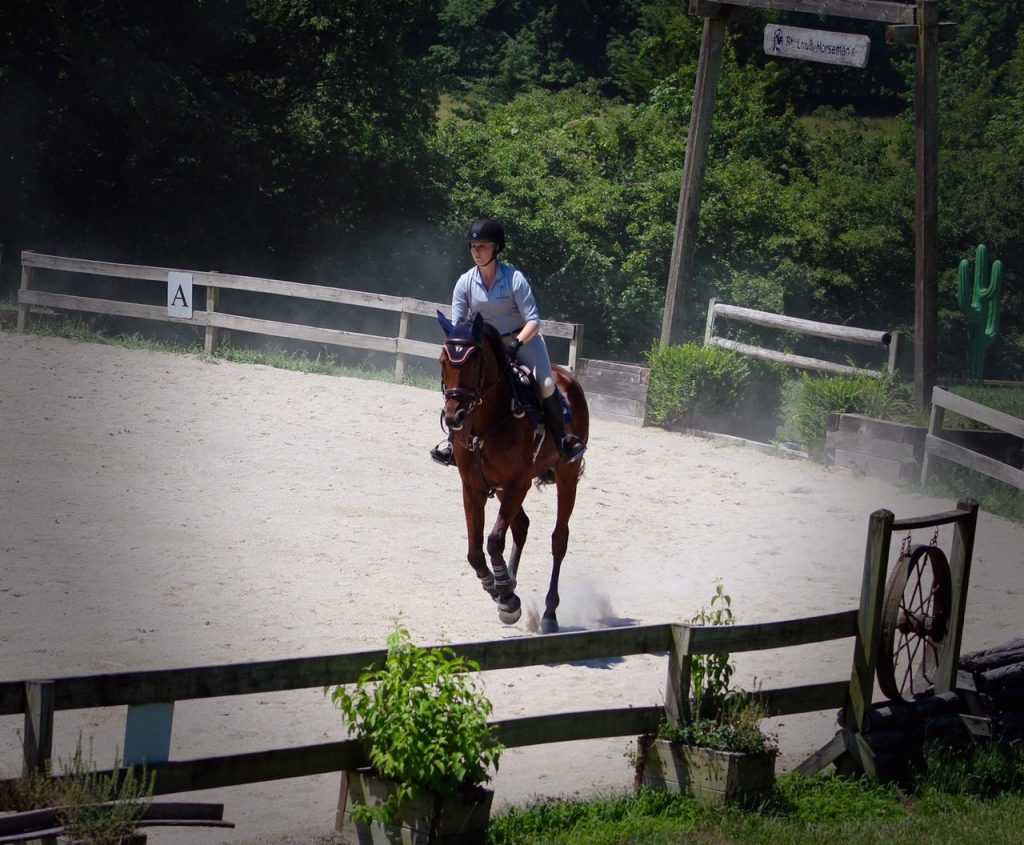 This helmet will now be the most important thing I put on each and every time I ride. Photo by Wayne DeLisle

And had I not had my helmet on that day, everything in my life could have changed from present tense to past tense.

Mind your melon, folks. Wear that helmet and wear it proud. I firmly believe that had I not had my helmet on when my head met that rock, that this story would have had a whole different ending. Every single decision has its consequences: which consequences do you want to live with?