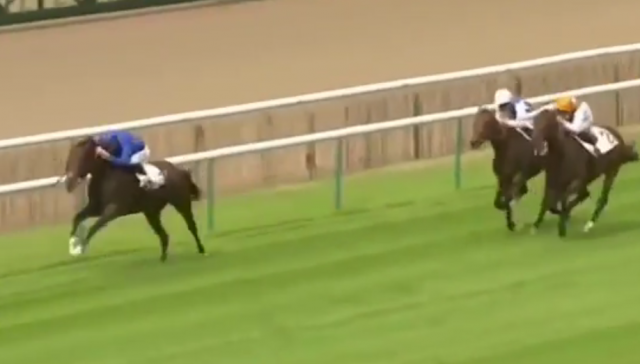 Undeniably our favorite anti-hero from the 2017 Kentucky Derby, Thunder Snow is back to winning form: watch his wire-to-wire domination of the G1 Prix Jean Prat in Chantilly, France!

While Thunder Snow’s wild if albeit short-lived performance in the 2017 Kentucky Derby may have spawned a thousand hilarious tweets and a viral ode to the colt’s temporary insanity (we’re all about insanity here at Nation Media), the horse, lest we forget, is actually a champion who just happened to have ONE really bad, extraordinarily high-profile day.

Perhaps a lot of us here in the States have kind of forgotten about Godolphin’s great three-year-old son of Helmet (also known for occasional wackiness from time to time around the racetrack). While we’ve all been twiddling our thumbs waiting for the season to open at Saratoga, Thunder Snow’s been quietly stalking his way around Europe, slowly redeeming that one decidedly off performance.

In May, Thunder Snow was second to Churchill in the G1 Irish Two Thousand Guineas at the Curragh; at Royal Ascot, the colt finished third to Barney Roy and Lancaster Bomber in the G1 St James’s Palace Stakes. And yesterday, Thunder Snow once again returned to the winner’s circle for the first time since his American invasion, winning the G1 Prix Jean Prat at Chantilly in France for three-year-olds, cruising right to the lead and refusing to relinquish it for the entire turf mile.

There’s plenty of summer season left so it’s way too early to speculate about a return trip to the United States for the Breeders’ Cup, but certainly vengeance must be on fans’ minds, curious if this clearly quite talented colt can take care of some unfinished business against the best that America has to offer. In recent years, international horses have had some noted strong performances at the Breeders’ Cup, so it’s not outside of the realm of possibility!

Whether we will see you back in the States or will have to admire yours performances from afar, we’ll always be your biggest fans, Thunder Snow! Congratulations on the big win and we can’t wait to see what’s next.