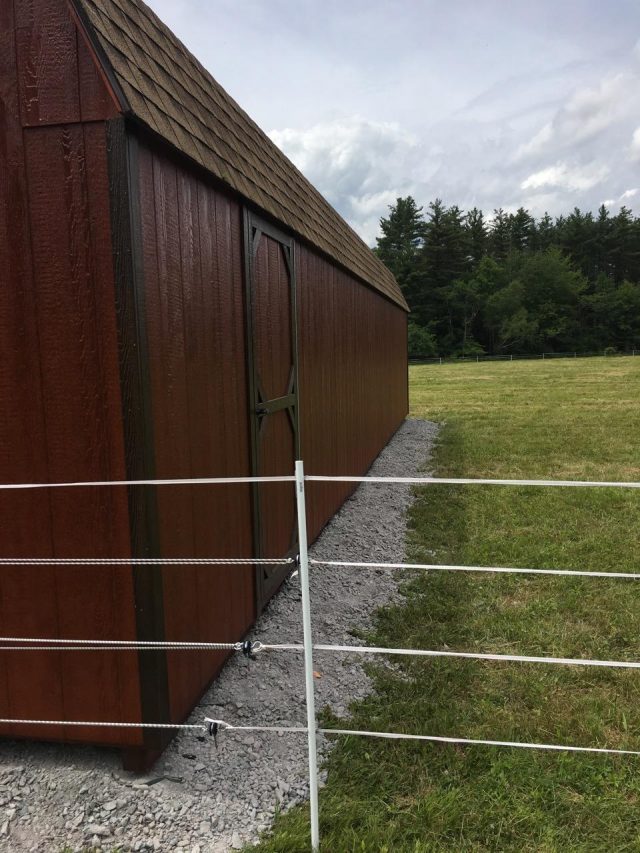 In June, we kicked off the building a horse property series covering everything I am researching from the ground up to build a horse property. (Need to catch up? Read Part 1, Part 2 and Part 3!) Last week, we made the move to the new place, but we’re still only about halfway done with the projects for this year. This week, follow the completion of the first section that includes a shed/barn, fencing, and actual horses in the pasture!

While originally the plan was fencing first, along with barn foundations, then barn deliveries, when moving it would seem nothing goes according to plan. Not even having water when you first move in… really (just check out last week’s moving chaos). However, we did manage to get all nine horses moved in, as well as myself, seven cats and two dogs. It just took a little adjustment of plans.

The barn foundations using Lighthoof for stabilization plus gravel went in a few weeks ago thanks to my amazing contractor and good friend at Atlantic Construction Concepts. He did a great job, despite some pretty large challenges, including the dump truck that arrived with the gravel and base sinking in the soft grass. That was a three hour work delay as he dug/dragged/towed them out with his Kubota (thank goodness they got out)! And finally a few days later, the barn bases were ready for the barns to arrive.

(All photos by CJ Millar.) 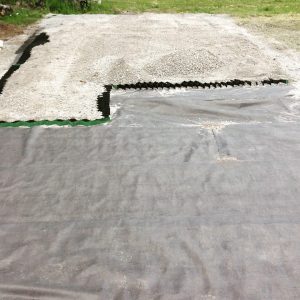 Laying down the Lighthoof panels for the barns 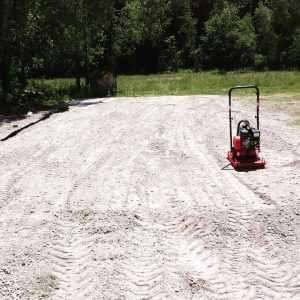 Getting the base ready for the shedrow barn 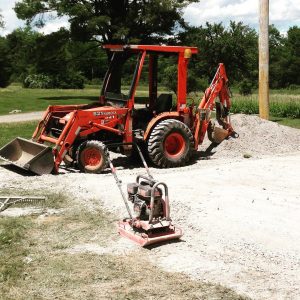 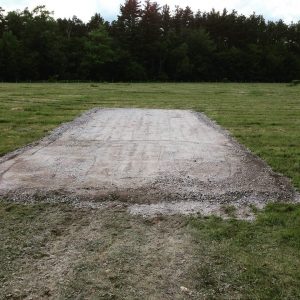 The base is all ready for the first shed to arrive!

Finding a good contractor is tricky, and while the Lighthoof can be installed with just two or three people and no major equipment – you can rent anything you don’t have – for the size of the base of each barn, moving gravel would be a nightmare. Mike did an awesome job, and I’ve already hired him to do more work around the farm!

While this was going on, the fencing arrived and the neighbor/handyman got to work with a friend in installing it. Fencing was tricky, because as I mentioned earlier, some of the ground was soft, while other areas were hard or rocky. In addition, we had the barns still to be delivered, weren’t 100% sure where the best places for gates would be, and in the long term wanted to be able to change and adjust fencing to allow for jumps in and out of fields as me and my friends all hunter pace and fox hunt. 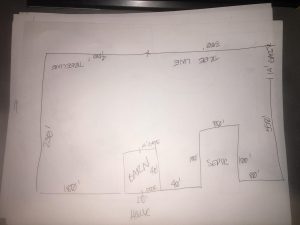 My amazing sketches of the fencing needs… 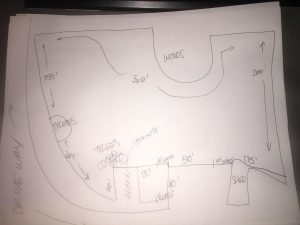 Obviously these are completely accurate, easy to read, and to scale…um….

We looked at Centaur fencing, which was our top choice for safety and warranty and was the only company that came with the option to have the vinyl rails electrified, but it needed to be specifically braced at corners and ends. This meant that if we ever wanted to add or change jumps, gates, or anything else for that matter, it would be a significant amount of work. Traditional wood fencing is a great idea and had worked wonderfully when properly maintained on my prior farm, but was very expensive and again not knowing how the ground would settle as we put horses on these pastures, it was a big question mark.

Ultimately, thanks to the help from Mike at Redstone Supply, and his patience in answering my 12463497 questions and then managing to take my scribbled rough sketches and translate them into actual orders, we opted for four-strand 1/2″ electric tape with fiberglass rods. The rods are stronger than the temporary step-in stakes and aesthetically pleasing to look at (we wanted a farm that looked nice!), as well as safe and affordable. It also made it easy to add gates later, change or move fencing however we need, and convert in sections to whatever permanent fencing we decided upon down the line without a lot of additional costs. Because the fence could start/end wherever needed and was much easier to brace and support than the other variations we looked at, it became a no-brainer. 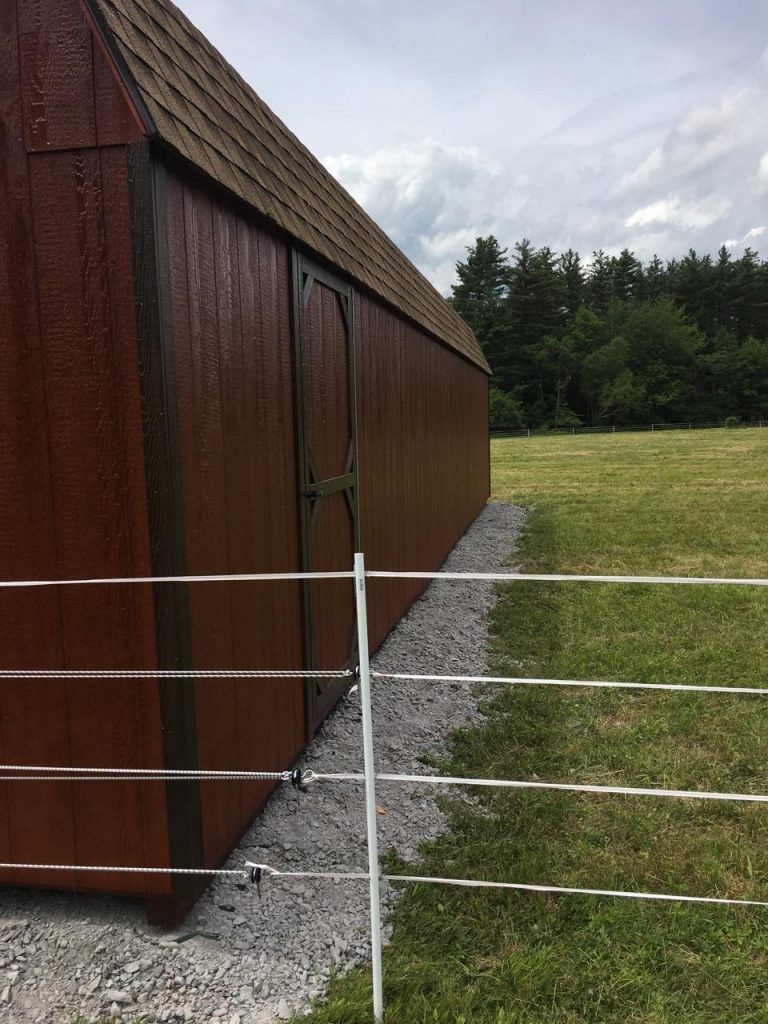 We used fiberglass rods to allow for easy adjustment and movement when the barns arrived. Thanks, Redstone Supply!

Because of the size (and cost) of our order, we placed two separate orders, and started with the larger field first. This would give me somewhere to put the five horses that weren’t here yet, while buying some time with the other four still in my friend’s field just up the hill. There was also the added benefit that we could move, change, or adjust whatever we needed when the barns arrived. Not bad!

Once the fencing was up, the first shed was scheduled for delivery from American Storage Buildings. Originally it was going to house temporary stalls and serve as a partial run in but the weather has been so nice and the shed was much nicer than expected that I think I am going to keep it for all of my equipment storage and work with Mike at Atlantic Construction Concepts to build run-in sheds for the horses in that field (the other field has a shedrow plus three stalls coming so the horses that need stalls will be set).

Because of this, I just opted for basic 1/4″ rolled mats to protect the floor from moisture and equipment leaks (fuel and oil, etc.) rather than something permeable. Since the shed had garage doors at each end, it needed a floor to be stable for shipping, and honestly it was just too nice of a structure and floor to use as run-in with temporary stalls. I’m really happy with how it turned out, and it will give me plenty of storage for all my farm stuff and winter blankets and so on, freeing up the old shed/barn that was here for just hay and bedding storage. 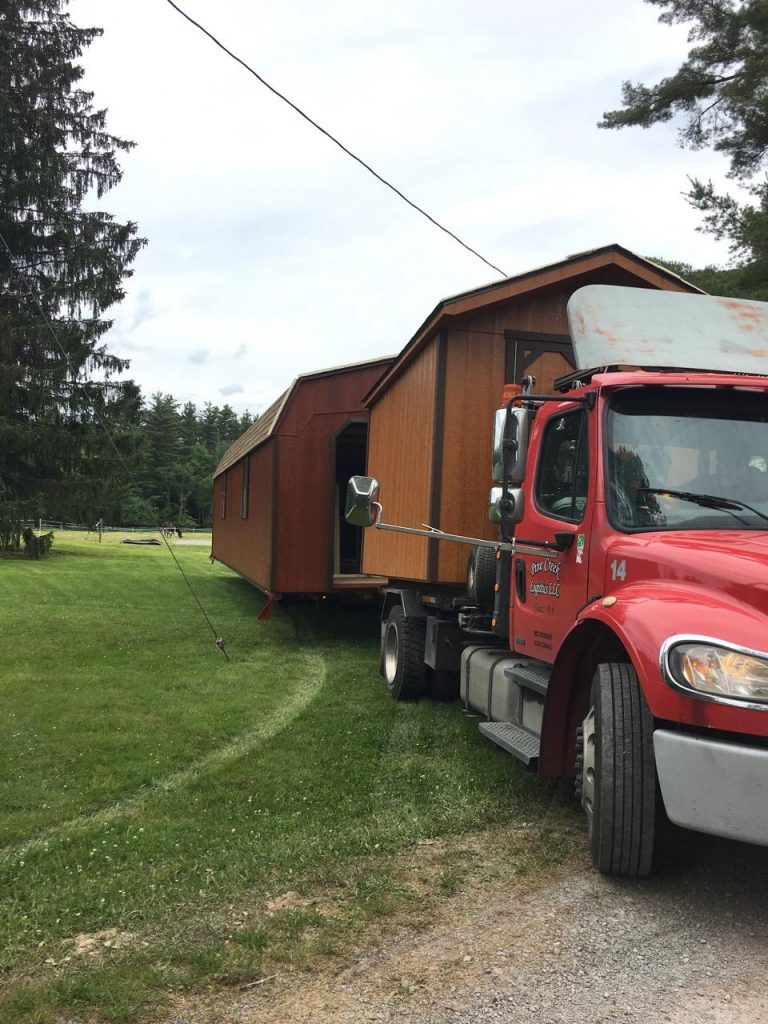 Delivery day was interesting. Several days prior, the dump truck with gravel got stuck in the soft wet grass and it was the same spot that the rig needed to drive in with the barns. Eeeek! It started to sink, but Glenn of American Storage Buildings was able to hook up the rig to his dually, and tow it right into the field where it was being placed. Talk about impressive driving on all counts! If you think driving a horse trailer is hard, you should have seen these guys maneuver!

Once the shed was in place, it looked great! I couldn’t be happier. Glenn and team from American Storage Buildings did a wonderful job, Mike of Atlantic Construction Concepts did an amazing job with the base, and Mike at Redstone Supply calculated exactly the amount of fencing we needed to do the job. Impressive teamwork, guys! Up next… pasture #2 that includes the remainder of the fencing, the shedrow barn with stalls, and and the permeable stall mats. We finally got an answer to all of our research and made a decision – how exciting! That doesn’t arrive until next week though, so stay tuned for more, coming soon… 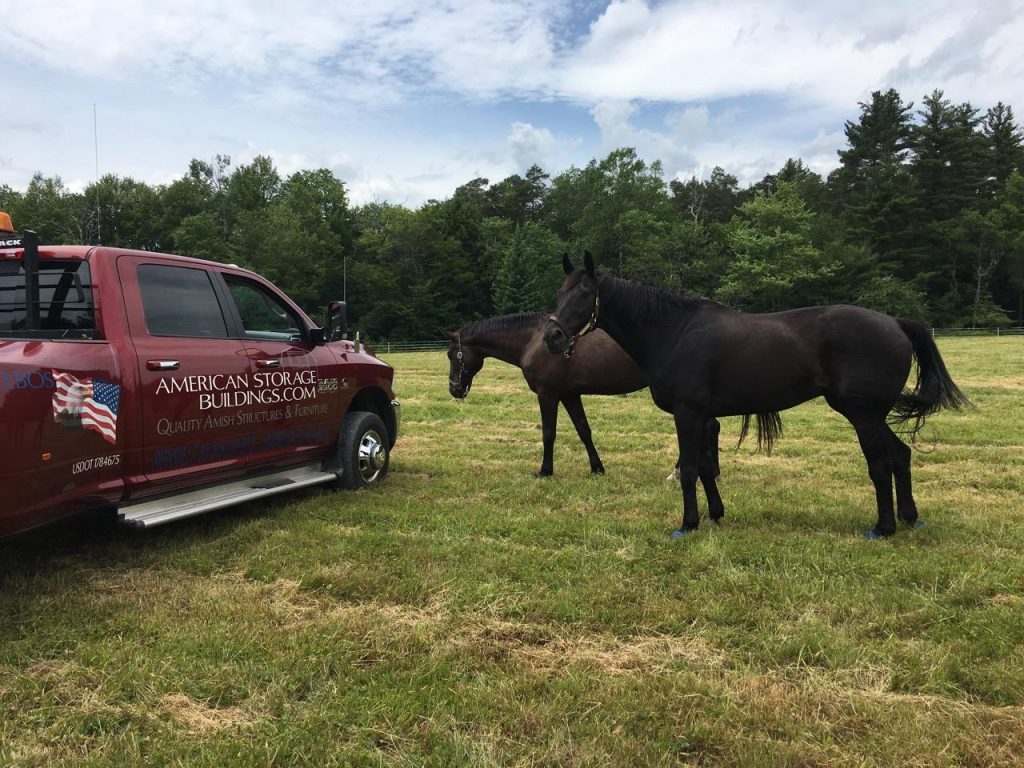 The horses say thanks, Glenn!