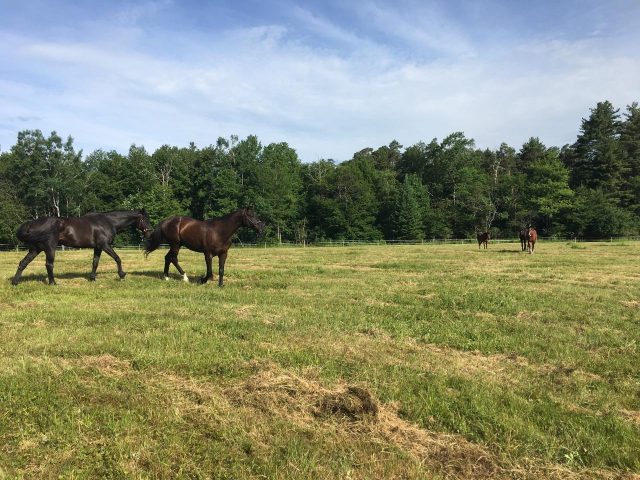 In case you missed it, we kicked off the building a horse property series earlier this month (read Part 1 and Part 2 here) that talks about everything I am researching from the ground up to build a horse property at the new location I am moving to. It’s been exciting and things are progressing, and despite things not being entirely ready (who needs water?), yesterday was moving day. Read about the chaos of moving a horse farm and where to go from here…

Of course things never go quite according to plan, and while I had planned on taking a longer amount of time to get things set up before moving, the end of the month was upon us and the timeline progressed due to a chaotic combination of circumstances: moving day was moved up.

I had already moved four of the nine horses that were coming with me (eight are mine, one is a friend’s retired gelding) to the property where they shared a field with my good friend’s herd. Her family also owns the property I am moving to, so it made it easy to move some of the horses even before my portion of the property was ready. And while the house and farm were progressing nicely, we ran into more than our fair share of snags.

In order to move in, three things really needed to come together: flooring in the house, fencing for the horses, and water for all of us. The first barn was being delivered before the end of the month, and the weather was beautiful with lots of tree cover, so a few days without an official shelter would be just fine. But moving furniture onto hardwood floors meant the finish had to cure first, and fencing had to be up to safely contain the horses, and well water — who needs that? Um… all of us, horses, myself and cats and dogs and chickens and ducks included! 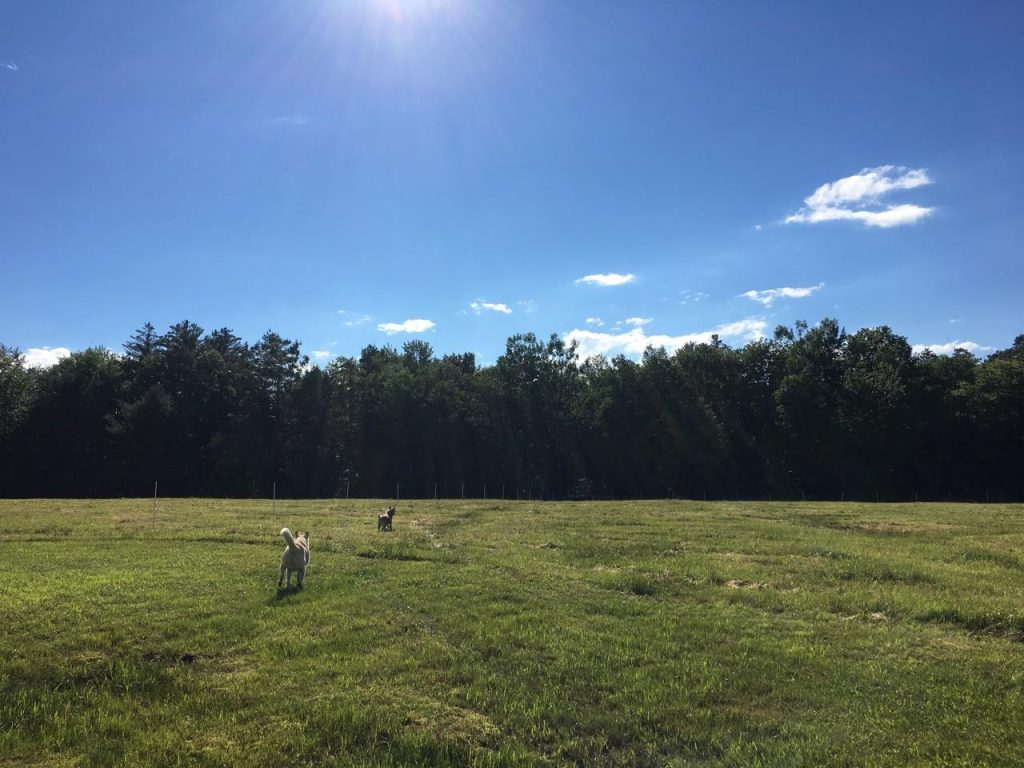 We were having a hard time getting a flooring company to come in and refinish the old hardwood floors. This was a priority since I have seven cats (some are barn cats too) and two dogs that can be tough on old floors if they aren’t properly protected. Additionally, redoing floors once furniture and pets are moved in is nothing short of a nightmare as you have to shift things around and stay off the floors for two or three days after they’re finished so that they can completely dry.

Somehow we got lucky and found a company that had a cancellation and could fit us in and get started the next day! Great! Only once they got started, they realized the floors had been coated in a heavy wax (an older style of polishing floors) that caused sanding to take significantly longer than expected. Biggest issue? It meant that if I wanted to move in on Wednesday, that me AND all my animals would be limited to the rooms with laminate floors: game room, kitchen, laundry room. Uh oh… 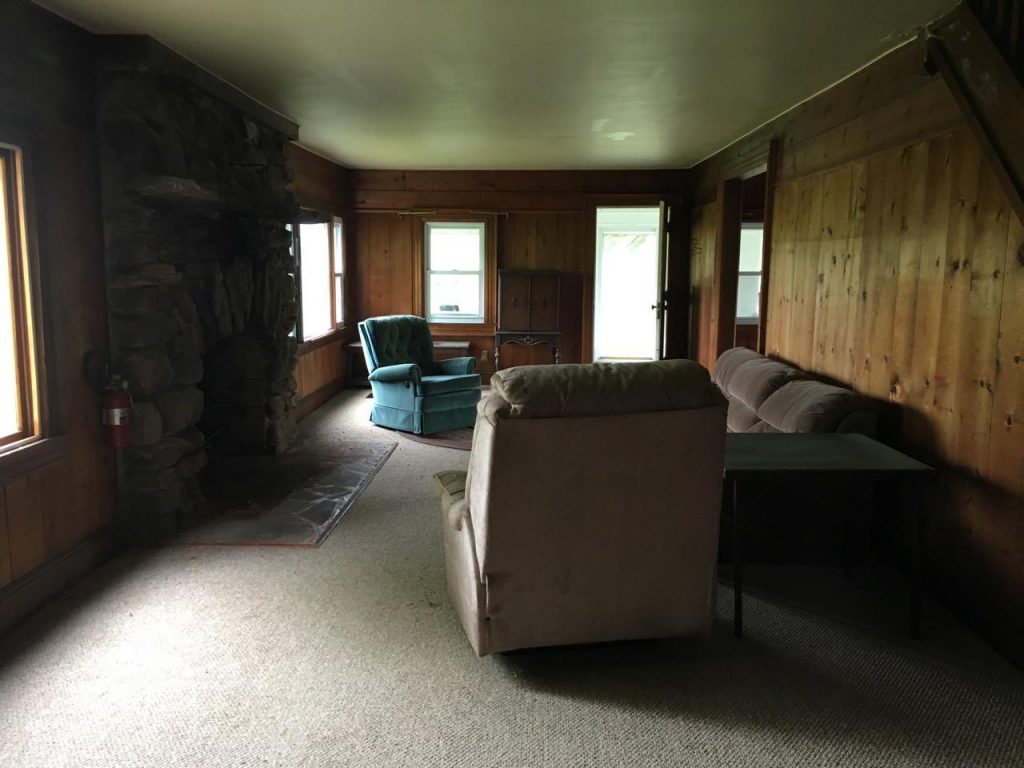 Going from this…(that old furniture’s got to go!) 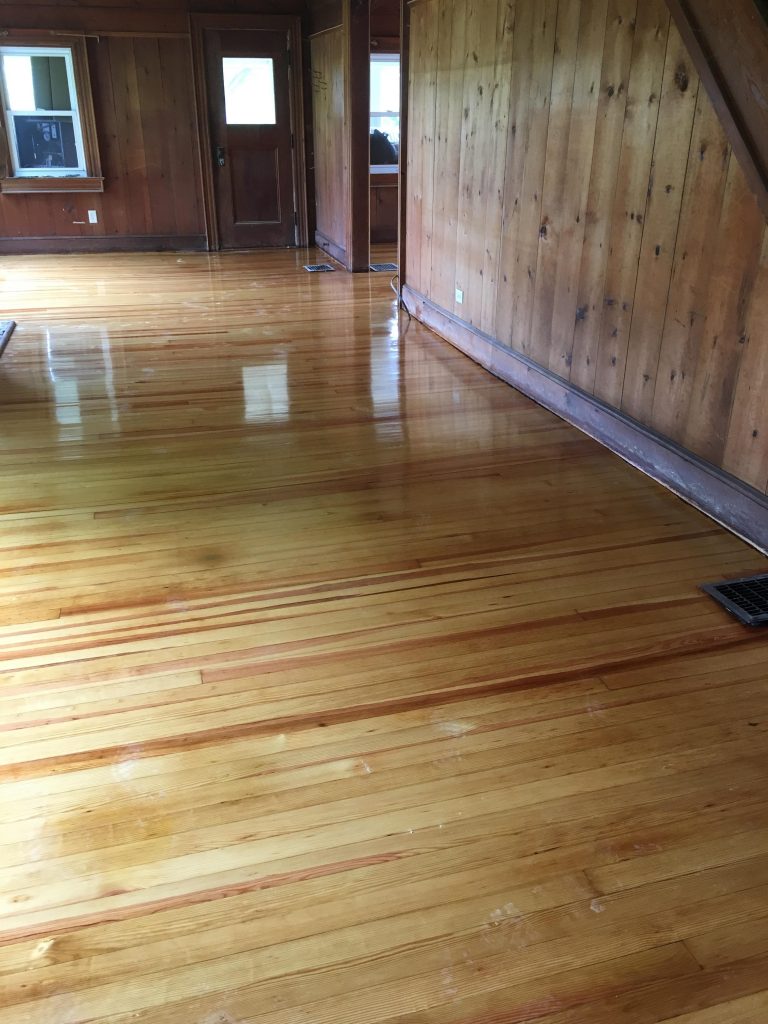 To this! What a huge difference. Now if only it would dry so I could stop sleeping in the kitchen on the futon LOL! (Photos from CJ Millar)

Next, we focused on fencing. A neighbor/handyman was going to put fencing up while I was out of town on business  — because of course who doesn’t want to be on a business trip in the middle of moving a horse farm? Piece of cake! So… I had the fencing delivered from Redstone Supply and they got our first order here super fast. We started with fiberglass posts and four-strand electric tape since there was a lot of wet areas to work through. We also weren’t entirely sure what areas would be permanent and what made sense to be moveable because of the amount of pasture we were looking at, so this made the most sense for now.

So what could go wrong? Fiberglass posts, metal clips, and run four strands of fence. Easy-peasy. Ha, I wished!

The friend that was working on fencing while I was traveling didn’t realize that with four strand electric and the metal ring clips you can go as far as 30′ – 50′ with posts, and set them at 10′. This meant partway through the job, he ran out of posts. The other order hadn’t even shipped yet, which made for a challenge, and of course I was on a business trip, which made things even more challenging since I was trying to coordinate a major move from states away. Ugh. This may just have to wait until I’m back. Only the day after I’m back is when I’m supposed to move. What to do? 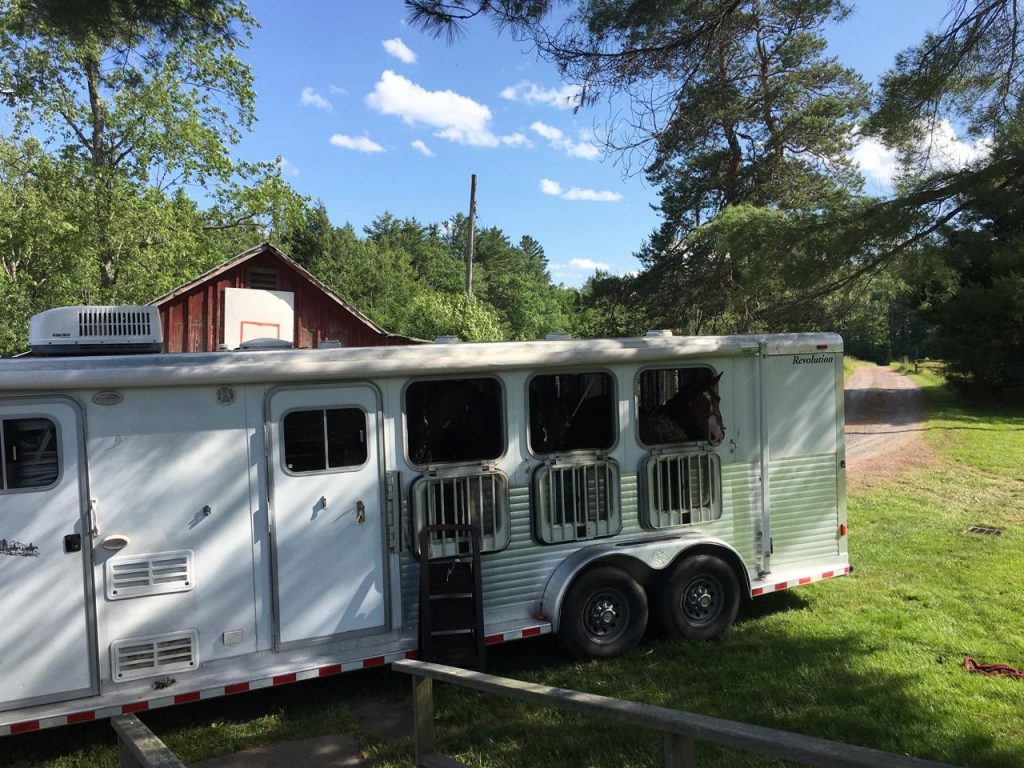 We made it, but the fencing isn’t done. Hey horses, let’s pretend it’s a show and our classes aren’t up yet, mmk? (photos from CJ Millar)

And last but certainly not least… water. The house and farm is run on natural springs as they are plentiful up here, and the jet pump needed to be replaced. #NBD, it’s a 30 min job. Great. Only once it was replaced, we discovered nearly ALL of the old copper pipes in the house had burst. No bueno. But now we had the flooring guys working non-stop, the contractor outside preparing the barn bases while the neighbor had to redo the fence, my friend who was home from college trying to paint inside to make some extra cash this summer, and the plumber had nowhere to work to get to the pipes that needed to be replaced… all before I moved in. It was chaos indeed!

What happened, you ask? Well, it’s now Thursday, and I’m here. As if by magic or sheer insanity, we moved in last night. Cats, dogs, horses, and me (the chickens and ducks were already here).

When I got home from my trip on Tuesday, I was able to get to the farm and help map out the fencing so that our neighbor could finish it on Wednesday before we arrived. We opted for 20′ so we just removed every other post and had enough to finish the job. The floor guys finished in time Wednesday morning and said it was safe to walk on the floors by Thursday, just to not put the furniture in place until the weekend. And the water… we still don’t have water, but the plumber is here working on it and thinks it will be fixed today (I hope!). Last night and this morning I used the living quarters of my horse trailer for a bathroom/shower and water and used my quad to drive water down from my friend’s house for the horses. Whew, we made it! 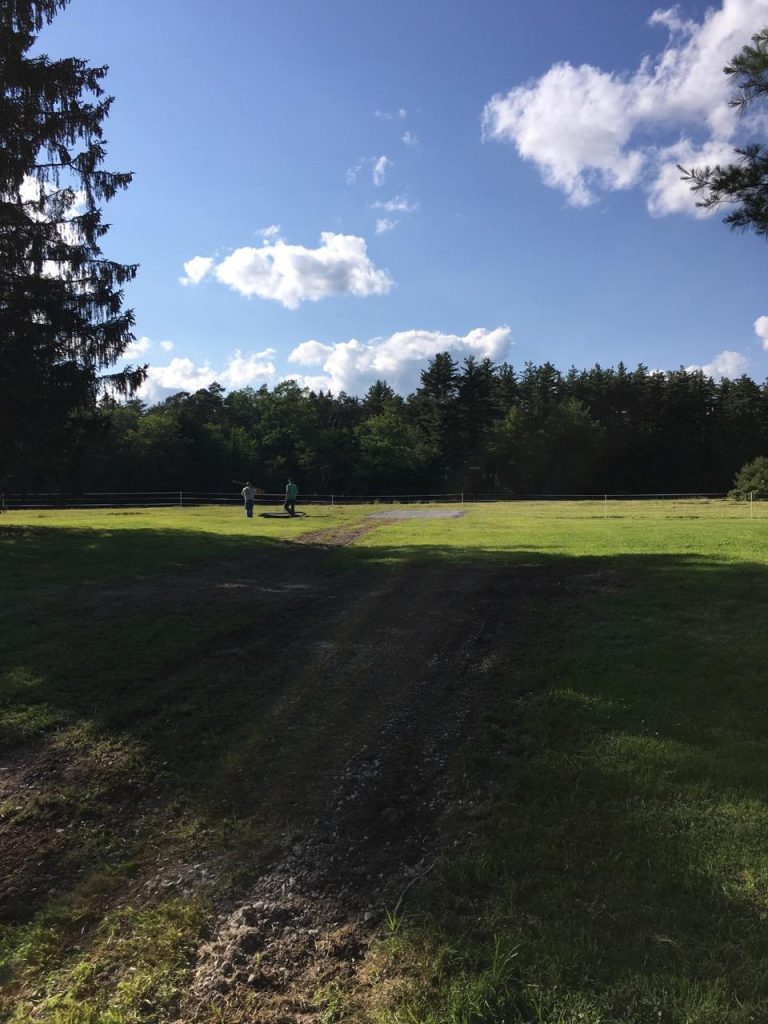 The guys finishing up the fencing. Thank goodness! Note the Lighthoof pad where the barn will go when it arrives.

The first barn gets delivered and the barn bases are ready. The rest of the fencing comes any day now so that we can start work on the other two pastures and spread the horses out even more. The second barn comes in a week or so. And we pick up the gates and posts for full gates today (as we just have electric gates for now) to be installed by the weekend. Wow, progress! It looks like this will still turn out to be an amazing project after all!

Stay tuned for updates next week on fencing research, more on Redstone Supply, and how we’re using Lighthoof at gate entrances along with the fencing options to ensure safe and secure fencing and footing for the horses in the fields. And then we’ll follow up with more about barns and stall mats once the second one is delivered in a few weeks. Yay! 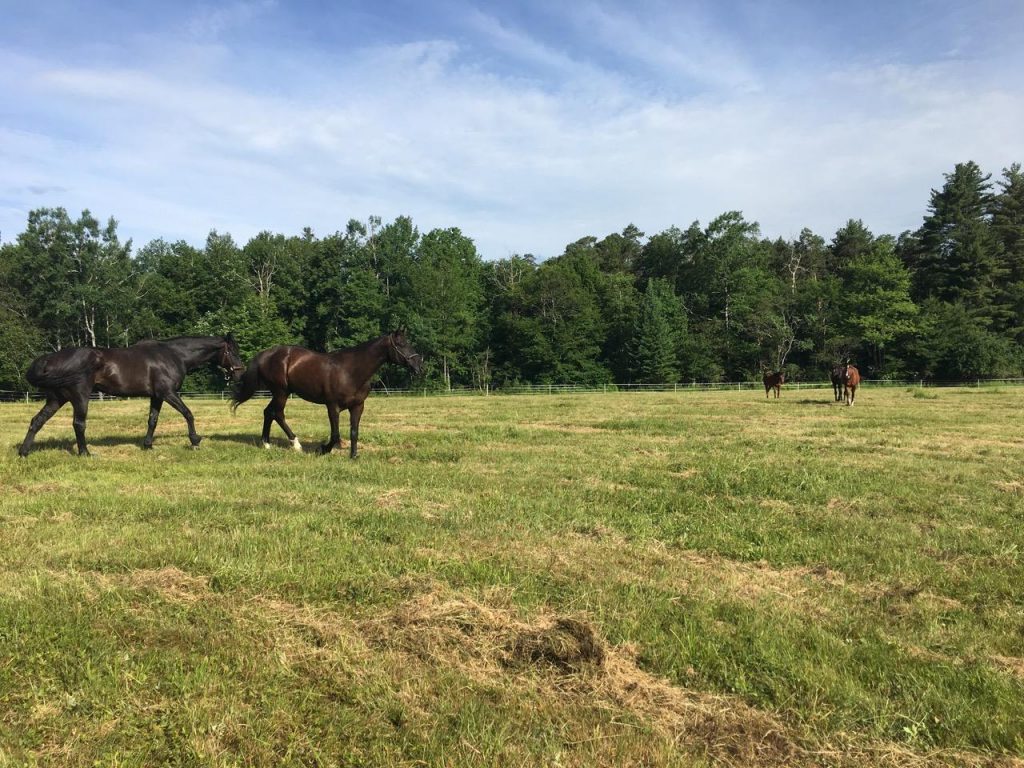 The chaos was completely worth it for this view of very happy horses in a huge grass field! (Photo from CJ Millar)