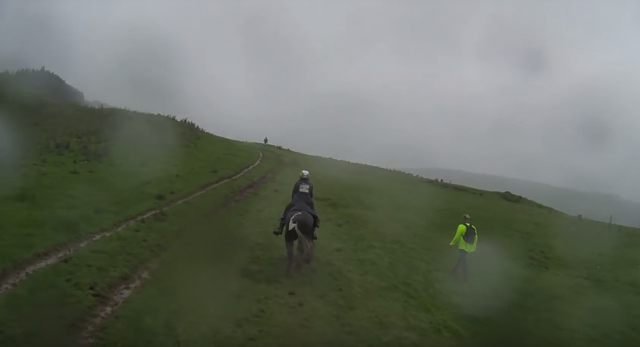 600 runners and 60 horse and rider combinations battled some truly miserable conditions in the annual and original Man vs. Horse race in Llanwrtyd Wells, Wales on June 11.

The famous Man vs. Horse Marathon in central Wales is the original such contest worldwide — not a true 26.2 mile marathon, this year’s course was nevertheless about 24 respectable miles with around 4,600 feet of climb through the rugged Welsh countryside.

Originally the result of a pub discussion over whether a human could ever beat a horse in a race: a horse is bigger and stronger, yes, but the argument was that a human is smaller and therefore lighter. Surprising very few of us, the horses generally win the Man vs. Horse race, though on two occasions we’ve been happily surprised to see a human take victory. (The two wins for the human race have taken place on very hot, humid days, leading to theories that humans physiologically handle such conditions better than horses.)

For this year’s race, a horse was again the victor — Rheidol Petra, ridden by Lola Evans, finished the 24 mile course in two and a half hours, twenty minutes ahead of the first human runner.

Both horses and riders (and the army of volunteers keeping everything going) battled some truly miserable conditions: wind, rain, sloppy footing and generally terrible weather.

Watch this rider’s helmet cam, with helpful indicators of elevation and speed, from the start of the race through the first hill:

According to the video description:

My first go at an endurance event (it’s short as such things go, but makes up for that by being over punishing terrain in central Wales). Had to pull out after only eight miles; my horse decided that she’d had enough. The grim weather made for treacherous footing, and we just don’t have access to the sorts of hills required to train properly for this. Maybe next time!

It’s generally recommended that neither rider nor runner take this race lightly, as the course is indeed rugged. Fortunately, all was well that ended well for this horse and rider pair.