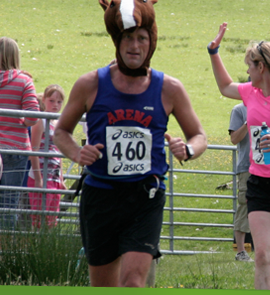 The Man v. Horse Marathon began in 1980 to settle an argument between two men in a pub. One man argued horses are bigger and stronger, while another argued that humans are lighter and in essence faster. As equestrians we know … the horse would always win.

But in 1982, the town of Llanwrtyd Wells changed the format to even the playing field. Now the runners are given a 15-minute head start. Still, it took 25 years before a man finally beat a horse, Huw Lobb won in 2 hours and 5 minutes beating the fastest horse by 2 minutes. His feat was repeated 3 years later by Florien Holtinger, but the horse has remained unbeaten for the 8 years since.

NPR reported both times the human won … it was super hot.

This year, the Man V. Horse Marathon took place during a cool rain, bad news for the runners. The first racer to reach the finish line was human: a 30-year-old named Hugh Aggleton. It was Aggleton’s third time entering the race. He completed the course in 2 hours and 30 minutes, but that wasn’t quite fast enough. Leo the horse, ridden by Geoff Allen, reached the finish just five minutes after him. After subtracting the human’s 15-minute head start, the horse had a time of 2:20, and it was crowned this year’s champion. Still, Aggleton was faster than a lot of other horse/rider pairs.

Aggleton told NPR, “I might make that a sort of tag line. Faster than 46 out of 50 horses.”