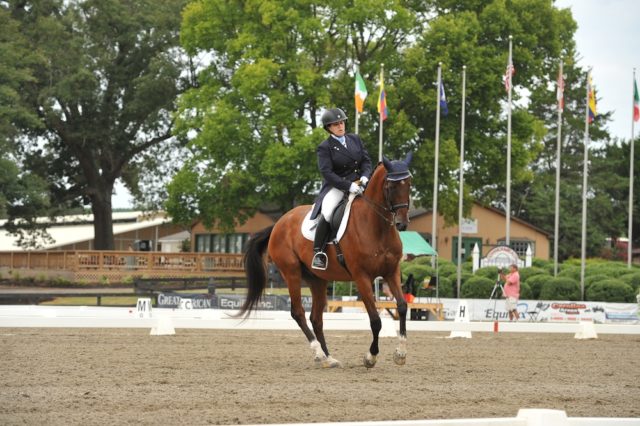 In 2014, we first introduced you to Elizabeth O’Connor and Bugsy, a one-eyed Thoroughbred, after O’Connor earned her USDF Silver. Big news: this unlikely horse just helped O’Connor earn her USDF Gold — while in her third trimester.

In September of 2014, we first introduced Horse Nation readers to Bugsy, a one-eyed Thoroughbred that set adult amateur Elizabeth O’Connor back all of $500. At the time of purchase, he was just two years old, underweight, gangly, awkward and unbroke — and of course, only had one eye. The pair accomplished what many would have thought impossible, with O’Connor achieving her USDF Bronze and Silver Rider Medals, all with Bugsy. We were thrilled to learn of the partnership’s latest accomplishment after a roller coaster year. Elizabeth O’Connor tells the story in her own words.

I have discovered that we often limit both ourselves and our horses. When you believe in your horse, your horse will believe in you. In September of 2014, my one-eyed Thoroughbred that I paid $500 for as a two year old went down the centerline at I-1. Besides his first thirty days under saddle, where they did walk trot only, I had done all of his training all the way through the I-1 .

We had already earned our USDF Bronze medal in 2011 and our Silver in 2014. No one thought that he would ever make it that far. I had decided that he didn’t owe me anything but that we would keep going until he said he wasn’t in the game anymore. By October we had earned our first score toward our Gold medal. By May of 2015 we were halfway to our Gold!! Let me tell you, horses will keep you humble, Grand Prix will have you questioning if you need to take up golf. I decided we didn’t have anything to lose and there was no point in showing at I-1 or I-2 since we had our two scores that are required for the Gold medal. So we jumped in, feet first.  Our scores were beyond humbling, but my trainer, Marija Trieschman reminded me that it was an accomplishment simply to be at Grand Prix.

Life is unpredictable: we lost a beloved dog to osteosarcoma in less than four months; we trained and regrouped, gave Grand Prix another go and received some respectable scores for a one-eyed $500 Thoroughbred. I rode and trained despite injuring my knee, which would require surgery; in September we rode a 61+ test! But our last show before my surgery in November, Bugsy was was horrible: everyone told me he had heard that I was going to retire him from showing after this show, whether or not we had gotten our last score and he wasn’t ready to retire.  It was a horrible way to end the show season.  Then I realized that I had been chasing a score, that it wasn’t fun anymore, that all I could see was that last score.  It would’ve almost been better if I hadn’t gotten a score at Grand Prix, because it was so close, but so far away.

Life threw another curve ball — but a good one. Right before Christmas, my husband and I discovered that we finally had a little one on the way. Now what?! Bugsy was 18 and would be 19 in March. How many more seasons would we have at the top of the sport? How fair would it be to expect him to go much longer at this level? We had been trying to have a baby for several years.

I decided I would play it by ear. I continued riding through morning sickness and a rapidly changing body. I had told my husband that for Christmas I wanted horse show expenses (one away show and two one day shows). We went to Williamston, NC for a two day away show. I went left instead of right, and there went 2% off the score (FEI First Error: 2% off the total score, Second Error:  Elimination). Bugsy was tense and behind my leg. Oh well — I was riding 19 weeks pregnant at Grand Prix. We went back out the next day and still not a 60. That was a LONG ride home to Maryland.

We gave it another go the second weekend in April. I realized that at this point that two days of showing back to back (I drive back and forth to save on stabling, hotel and food cost) was too much. I scratched one of the rides. I decide to have the ride videotaped.  It was a good test for Bugsy; he tried. However, we fell short of the 60% — way short — so short that we hadn’t been that short since we had first tried Grand Prix in 2015.

Almost panicked, I decided to enter several more shows. I scratched one after feeling unwell (the little one was more important); the next, Bugsy felt like he had no energy at all and our score fell short. We had just two more shows left.

The morning of the next show, I had the whole “why do I do this again?” thought, but got up and drove the hour up to the barn, hooked up and drove the other hour and a half to the showgrounds. (My trainer, as well as my friend and her husband were already up there, so I wasn’t going alone per se.) Bugs was a bit full of himself when I had gotten to the barn, and when I gave him a bath, and when I loaded him up on the trailer, so I didn’t know what my 19 year old Grand Prix horse was going to do when I tacked him up.

I got on and he was jigging and tossing his head nervously. I had him passage the entire lap around the arena. After that I walked him on a loose rein, but I could tell he was amped. I decided to drop the curb chain to two and decided that he was either going to bulldoze through my pregnant butt or it would work to calm him down (like a typical Thoroughbred, sometimes less is more). My trainer went right in front of me with her I-2 horse and she went early, so I decided it’s now or never: we can’t fix this in the warm up.

We went early. Halfway through the test I thought to myself: “Man, you’re owning this test and you’re in your third trimester tomorrow and not even out of breath!” I looked to my trainer, standing on the rail and she smiled and gave me a thumbs up as I came around the corner. I smiled back: this is still my best memory from the test. I KNEW this was our best Grand Prix test EVER! I walked out of the ring patting my dance partner of 17 years with a big smile on my face.

Fifteen minutes later, my head was buried on my trainer’s shoulder and we were both crying: 61.3%! The fairytale was complete! From gangly underweight unbroken one eyed $500.00 two-year-old to every single score earned for USDF Bronze, Silver and Gold.

So for all of you out there who don’t have a lot of money, or a fancy dressage horse: hard work means more than talent. Aim for the moon, for if you miss, you will still be among the stars.