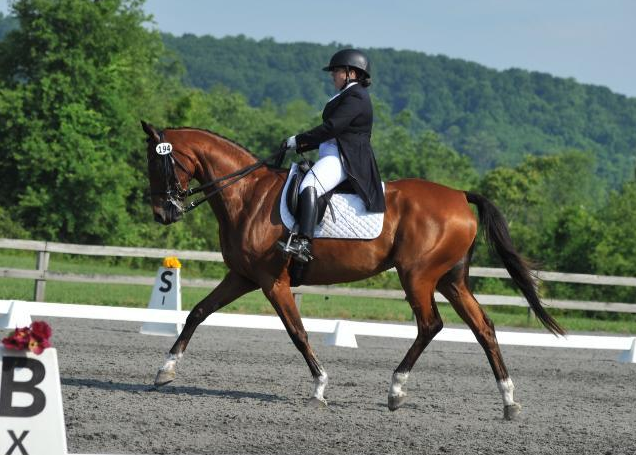 When we heard about Bugsy, we knew there had to be a special story behind him. Elizabeth kindly agreed to share his story with us.

So, to rewind a few years, what in the world convinced you to buy a 2-year-old one-eyed unbroken thoroughbred? Was there something special about him that jumped out at you?

I did a bloodline search for Nearco. Since Bugsy’s grandsire (on sire’s side) is Secretariat who is descended from Nearco, his ad came up on DreamHorse. I went and looked at this gangly, scrawny, thick-winter-coated gelding who barely knew how to lead and pawed in the crossties and was like ummmm. But I just couldn’t dismiss him.

The owner was asking $1,500 and contacted me asking if I was still interested because I was the most qualified. I told her I couldn’t pay $1,500 for an unbroke one-eyed thoroughbred. She counter-offered $500 and I went and picked him up. He spent the first week being led with a stud chain and he felt walking on his hind legs was perfectly acceptable. He learned otherwise. It took six months to get him in good weight.

With the exception of his first 30 days under saddle, you’ve done all of his training since then. What has he been like to work with?

He wasn’t an easy horse. We went through some hard times during which I questioned continuing riding him. He was pretty spooky for quite a while. He hates the wind and birds. He didn’t stop growing until he was 7 so we didn’t start progressing up the levels until after then. I had one FEI rider/ judge ask me what my goals were with him and I said I wanted to earn my Bronze medal. Her response was, ” Well, let’s see if he can make it to First Level.” I didn’t ride with her again.

But he will try his heart out for me as long as he feels I am being fair to him. We joke that he is a teamster and has this union contract somewhere — whenever he gets his feelings hurt or feels like he is being treated unjustly (like having to get braided when everyone else is outside) that we are violating his contract and he is filing a complaint with his union.

On the ground he is the biggest social butterfly lovebug. He nickers for me when I pull up to the barn, and if don’t get in to see him quick enough he whinnies loudly. He likes to lick like a dog. Under saddle most days he is an earnest worker who tries hard for me. He is usually more “fresh” in cooler weather but what thoroughbred isn’t? Funny thing is, he can be nervous about a new environment (like a big indoor at a show) but if another horse is super scared he steps up and will help “pony” them around. In fact last year at the BLM championships a horse wasn’t wanting to stop and Bugs stepped up in front of him and helped stop him. We call him “the camp counselor.”

Does the fact that he only has one eye affect his training at all, either in dressage or when you used to jump him?

Yeah, when I first started working with him in the round pen (before I sent him off for his 30 days training with Ursula Ferrier) I would do the work to the seeing side first and to the blind side I would stomp when I got in front of his shoulder. I made sure he knew the verbal cues for walk, trot, canter and whoa. Once we actually jumped a 3’6″ by 3’6″ oxer! But we had some bad crash-and-burns due to him getting distracted looking at something besides the fence on approach so I decided to sell the jump saddle.

When he was younger he would sometimes spook if we were going one direction and changed direction to his seeing side being facing towards the outside of the arena. Once a lady cut us off at a show — he was 4 and it was a recognized dressage show — and Bugs never saw her. He was 4 so not power steering and he literally t-boned the horse. The lady glared at me and I said, “What do you want? You cut us off and he’s blind on the side you came from.” She apologized profusely after that.

Do you get funny looks in the warm-up ring, or do judges ever mention it in their comments?

Not in the show arena — in fact most people don’t even notice. Sometimes I do have to tell people who get a little too close that he is blind in his left eye. Once I had a couple of people at a boarding facility rudely staring at it and whispering; I noticed it but ignored it. Finally they said, “What’s wrong with your horse’s eye?”  I walked over and started freaking out: “Oh my God!” They looked horrified and then I calmly stated, “Yeah, he was born like that.” Pretty sure they learned a valuable lesson about life that day.

The hole where his eye should be is still open. He blinks, etc., and it’s never caused any big issues so I never had it closed up. It’s a much smaller size than his functioning eye. Once he rolled and got large pieces of gravel in it and I had to irrigate it with a dosing syringe… he just stood there and let me do it. He knows when people are helping.

You’re competing in the upper-levels of dressage against big, fancy-moving warmbloods that were purpose-bred for the sport. Is that ever intimidating?

No, not really. As a kid I was a working student for several FEI riders so I know quite a few of them. Plus I am a police officer and have been for 14 years so not much intimidates me. I was the first female k9 handler in the history of my agency so I like to make waves!

What advice would you have for aspiring dressage riders on a budget?

Don’t give up. Find a trainer who believes in you and your horse. Be fair and kind to your horse and he will reward your fairness and kindness with his heart.

We went through some tough times. Injuries to me and the horse, divorce (now happily remarried) etc. In fact 2012 and 2013 was a roller coaster. In 2012 he had a mild case of ulcers because his BFF left his pasture, he got kicked and a huge hematoma, had a huge abscess and hurt his tendon in turnout (minor). Then in 2013 he was quicked by the farrier and then, being a dork in turnout, he hurt one check ligament then the other and actually fell down and hurt his shoulder (at the time he was by himself and his shoulder was all knotted up). Needless to say he plays rough in turnout, but he’s a horse! He has to be able to be a horse!! He goes out with three other geldings for at least 12 hours a day. I don’t get massages but my horse does!

You’ve earned your Bronze and Silver USDF medals on him. How did that feel?

One word: Amazing. I cried when I earned my final score for my Bronze and my Silver. I mean plenty of people get their scores for the medals, but how many of them do it on a one eyed $500 thoroughbred they trained all by themselves??? They call them Rider Medals but Bugs and I both earned them. I wasn’t able to go to get my Bronze medal from the USDF convention but I will be going to Boston to the convention this year to get the Silver!

How old is Bugsy now, and what are your plans for the future?

He is 16 right now, and we just rode our first Intermediate I test yesterday. As long as he’s happy and sound we will keep going. I’m pretty sure he played too rough in turnout Saturday night because he was a little grumpy and tense. Warm-up was probably the worst we have had in years but he did rise to the occasion once we got into the arena and despite the tenseness we still placed third, .283% away from second. And first and second were open riders, plus the class was an FEI Test of Choice class. I still got a little teary-eyed in the warm-up. I was talking to him and I said, “Well, Bugs no matter what we proved ’em all wrong.”

Dedication and hard work will be rewarded. Bugs wasn’t a “wow” mover in the field; in fact I’ve had more than one rider and vet see him move on the ground and then when I get on they are like, “Um, I hate to say this but I never thought he could move like that.” You don’t have to have an unending check book to have success in this sport. Most years I have only been able to afford to go to three to four recognized shows. I work part-time and overtime to afford to show and train. If you want something bad enough and have the dedication and drive, one day you will succeed. Honestly, I have my inner circle of support, my friends who stood by me through the good and bad and the few trainers who believed in us, and having that support helped us as well.

Thank you so much for sharing your inspiring story, Elizabeth. Go Riding!