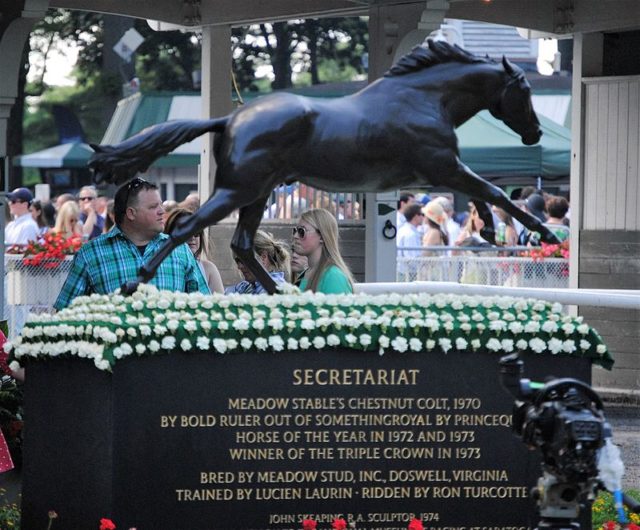 Here’s your crib sheet for the 2017 Belmont Stakes so you can look like the most knowledgeable person at your viewing party. Check out the scoop on the field and vote in our poll for who you think will win!

No, there won’t be a Triple Crown winner this year after Cloud Computing won the Preakness Stakes, ending Derby winner Always Dreaming’s chance at eternal glory. (2017 will join the illustrious rank of years where a different horse won each individual jewel of the Triple Crown — check out our two-part history of such Triple Crowns in Part I and Part II). Sadly, likely favorite Classic Empire was forced to scratch when his connections discovered an abscess on Wednesday morning.

That doesn’t mean, however, that it won’t still be an interesting race: with some returning horses from the first two legs as well as some intriguing new shooters plus a Japanese colt throwing his hat into the ring, the 2017 Belmont Stakes has plenty of intrigue to captivate racing fans. At a mile and a half, this is likely to be the longest race that most of these colts have contested in their careers so far, earning the race the nickname “the Test of the Champion.” Check out our field preview and then vote in our poll for who you think will win!

While Twisted Tom perhaps has the stamina to handle the Test of the Champion, the Belmont will be a significant step up in class for the gelding.

Tapwrit finished sixth in the Derby after navigating a sloppy, traffic-choked track. He skipped the Preakness to rest and train and now heads to the Belmont in the footsteps of another Tapit son, Creator, who pulled off a surprise win last year. Will history repeat itself again?

Gormley finished a distant ninth in the Kentucky Derby in the massive 20-horse field. By skipping the Preakness, he comes into the Belmont fresh and ready.

J Boys Echo will be reunited with jockey Robby Albarado for the first time since Albarado fractured his leg in an accident just before the Derby. Will the winning combination be enough to propel this colt to the win in the Belmont? J Boys Echo skipped the Preakness after a poor race in the Derby to come to New York fresh.

This colt followed up his fourth-place finish in the Louisiana Derby with a disappointing run in the Illinois Derby, which forced his connections to regroup. His most recent start was an impressive win in an allowance at Churchill, but one wonders if this horse is about to be overfaced in the Belmont Stakes.

With a surprising second place finish in the Derby, the odds shortened on Lookin At Lee for the Preakness where he did not rise to expectations. With a jockey switch to Irad Ortiz, who is currently Belmont’s leading rider, it remains to be seen if this horse will find the finish — with a relatively light field, anything is possible.

Irish War Cry helped set a quick early pace in the Derby but ultimately finished tenth in the slop; with some rest and sharp workouts the colt should be back in winning form for the third and longest leg of the Triple Crown. Provided he can go the distance, he should be one to watch.

Coming off of a third place finish in the Preakness, the odds should be shorter on this colt in the Belmont Stakes. He made up an impressive amount of ground in the second leg of the Triple Crown, and if he can go the mile and a half his style might suit the longer race to catch tiring leaders.

This long shot colt has yet to win a graded stakes, and will surprise many if he can go the mile and a half. Superstar jockey Mike Smith may be able to help.

Multiplier finished sixth in the Preakness Stakes, perhaps reminding fans that he lacks experience having only debuted this year. The Preakness was a considerable step up in class for this colt, so it remains to be seen how much he developed in the quick turnaround between races. His Illinois Derby was impressive but this still may be too much too soon.

Epicharis, by virtue of winning the Hyacinth Stakes which is on the Japanese Road to the Kentucky Derby, could have run in the first leg of the Triple Crown but his connections chose instead to route him towards the Belmont Stakes. Epicharis has contested the mile and a half distance in Japan, and with Belmont considered the track most like his home surfaces, perhaps this foreign contender stands a good chance.

America’s sentimental favorite from the Kentucky Derby is back to prove that a one-eyed horse can do everything a two-eyed horse can do… does that include winning the Belmont? He’s still as much of an actual long-shot in New York as he was in Kentucky, but in a light field anything is possible.