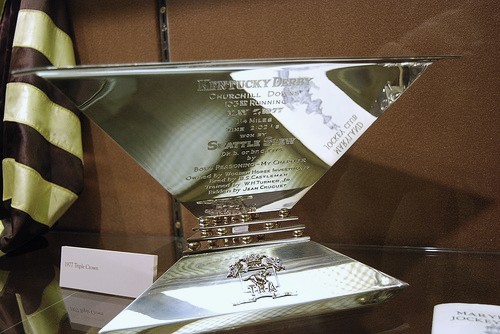 With both Cloud Computing and Always Dreaming skipping the Belmont, we’ll have three different winners of the Triple Crown races this year. We take a look back through the Triple Crown’s history for similar stories!

The names of the 12 Triple Crown winners are seemingly etched into our memories — few of us can forget those horses who stood up to American horse racing’s true test and captured the Kentucky Derby, Preakness Stakes and Belmont Stakes. I’m willing to bet that most of us will also remember at least a few Triple Crown “near-misses” — a standout colt that won the Derby and the Preakness only to be nipped in the Belmont (for me, a Philadelphia girl, it’s Smarty Jones that still makes my heart hurt a little).

Less likely to stand out in memory, however, but equally possessing its own fascinating stories are the years in which a different horse wins each of the three jewels of horse racing’s challenge. We’ve gone back in history to take a look at the Triple Crown in a new light, all the way back to the 1930s when the concept of the Triple Crown was first conceived by turf writers. In 1930, Gallant Fox would win all three races, and decades’ worth of hopes and dreams were launched.

Brokers Tip is still famous in racehorse lore for having the Kentucky Derby as his only career win, battling Head Play all the way to the wire (literally — the jockeys were reportedly exchanging blows) to win in a photo. Head Play set a blazing fast lead in the Preakness and would not be caught; Brokers Tip finished dead last. Neither horse was entered in the Belmont Stakes, where Hurryoff went off as a relative long shot but won.

Cavalcade and High Quest were stablemates, owned by Brookmeade Stable; Cavalcade was the heavy favorite in the Kentucky Derby and beat another stablemate Time Clock. Time Clock was replaced in the Preakness by High Quest, who dueled Cavalcade to beat him by a nose. Cavalcade sat out the Belmont Stakes, where High Quest finished second to Peace Chance.

Hoop Jr. was the first race horse owned by Fred Hooper, and he took Hooper all the way to the top by winning the 1945 Derby. In the Preakness Stakes, Hoop Jr. suffered a career-ending injury, finishing second with a bowed tendon to Polynesian, who had skipped the Derby and who would also skip the Belmont. Two-year-old champion Pavot had skipped the Derby due to injury sustained by stepping on a pin, and then had finished fifth in the Preakness. He got his moment in the Belmont Stakes with a win, and then launched a highly successful four-year-old campaign.

This year’s Triple Crown was a rivalry between these outstanding colts; Phalanx was the favorite going into the Derby but was beaten by Jet Pilot. In the Preakness, Faultless edged a win with Phalanx finishing third and Jet Pilot running fourth. Phalanx finally got his due in the Belmont, winning by five lengths and Faultless finishing fifth (Jet Pilot did not run after sustaining a career-ending injury in the Withers after the Preakness).

Count Turf was a long shot winner of the 1951 Kentucky Derby but did not enter the Preakness Stakes; the second jewel would be won by another long shot in Bold. Count Turf returned for the Belmont while Bold sat this race out; the Belmont was won by Preakness-runner up Counterpoint.

Hill Gail won the Kentucky Derby as the favorite, but sustained an injury during the race that would sideline him for the rest of the Triple Crown. Derby third-place finisher Blue Man instead was able to win the Preakness. The pattern continued for the Belmont Stakes, with Preakness third-place finisher One Count taking the win as Blue Man finished second.

Determine was the second choice for the Derby but became the first gray horse to ever win the race. He was not entered in the Preakness nor the Belmont due to fears by his connections that he would become overraced; Derby runner-up Hasty Road won the Preakness. High Gun would win the Belmont Stakes and many other important three-year-old races to eventually be named American champion.

Iron Liege won the Kentucky Derby after holding off a challenge by Gallant Man; the latter was perhaps foiled by an infamous miscalculation by jockey Bill Shoemaker. Fourth-place Derby finisher Bold Ruler won the Preakness handily while Iron Liege finished second; Gallant Man, who had sat out the Preakness, took the Belmont Stakes over favorite Bold Ruler. Iron Liege had skipped the third leg.

Tomy Lee won the 1959 Kentucky Derby by a nose over Sword Dancer and did not contest the next two races, leaving them wide-open for other winners. Royal Orbit, who had finished fourth in the Derby, took the Preakness Stakes again over Sword Dancer; Sword Dancer dueled with Baghdad in the stretch of the Belmont to finally win his American classic.

Venetian Way did contest all three legs of the Triple Crown but was only successful in winning the Kentucky Derby over Bally Ache. Bally Ache got his revenge by winning the Preakness Stakes over Venetian Way, but was scratched from the Belmont the day before with a sudden lameness. Celtic Ash, who had skipped the Derby and finished third in the Preakness, beating favorite Venetian Way.

Decidedly set a Churchill record for a mile and a quarter in the 1962 Derby, but did not place in the next two legs. Greek Money, a fresh contender for the Preakness, defeated a colt named Ridan by a nose to win. Despite being the betting favorite for the Belmont, Greek Money finished a distant seventh to Jaipur.

1965: Lucky Debonair, Tom Rolfe and Hail to All

Lucky Debonair defeated two favorites to win the Kentucky Derby, but a bruised ankle kept him out of the Preakness and he did not enter the Belmont either. Tom Rolfe came off of his third place Derby finish to win the Preakness despite losing a shoe and suffering a minor injury during the race. Tom Rolfe led the Belmont but was beaten in the stretch by Hail to All.

1970 seemed a fairly uninteresting year for three-year-olds; Dust Commander won the Kentucky Derby but did not contest the other two legs; Personality ran in the Derby and won the Preakness but scratched the Belmont due to a fever. High Echelon, a stablemate of Personality, won the Belmont and never won another major stakes race.

Foolish Pleasure won the Kentucky Derby and was then runner-up in the following two races; he is perhaps best known now for his match race with ill-fated filly Ruffian. Master Derby managed to upset Foolish Pleasure in the Preakness after finishing fourth in the Derby; the colt would finish third behind Foolish Pleasure in the Belmont as Avatar, who had finished out of the money in the previous legs, took the win.

The first filly to win the Derby in 65 years, Genuine Risk would go on to be named Champion 3-year-old Filly. She was beaten by Codex in the Preakness Stakes, who had skipped the Derby. Both horses were upset in the Belmont by 53-1 long shot Temperance Hill.

Gato Del Sol had been winless going into the Derby, but won by two and a half lengths. He skipped the Preakness, which was the first time in over two decades that a Derby winner intentionally did so. Aloma’s Ruler took the second leg, then met Gato Del Sol in the Belmont where both horses were beaten by Conquistador Cielo who had raced just six days prior.

We’ll be back tomorrow with Part II, leading up to 2017! Make sure you keep it locked on Horse Nation for your Triple Crown coverage.