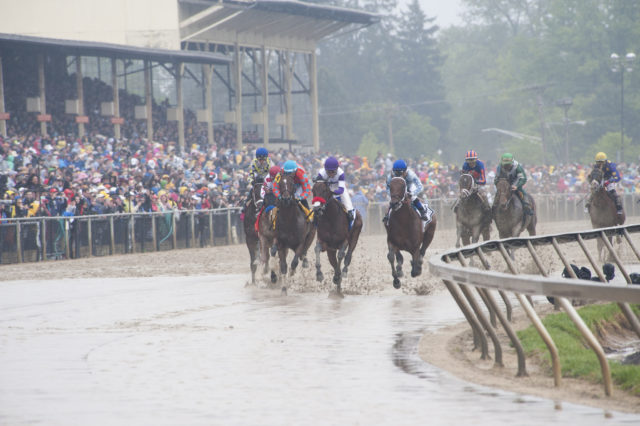 Here’s your crib sheet for the 2017 Preakness Stakes so you can look like the most knowledgeable person at your viewing party. Check out the scoop on the field and vote in our poll for who you think will win!

The Triple Crown trail has moved to Maryland this week, centered on Pimlico Race Course where the 142nd Preakness Stakes will be run on Saturday. There’s always a wave of anticipation going into Preakness weekend, with another year of Triple Crown hopes riding on the Derby victor — and this year, the eyes of the world are on Always Dreaming. With a mix of Derby contenders returning for another crack and a few fresh runners, it’s another fascinating field.

But that doesn’t mean there aren’t other horses in the field who could rain on the Triple Crown parade early — here’s a quick and dirty preview of the field. Make sure you vote in our poll below for your pick!

Multiplier earned a gritty win in his first graded start in last month’s Illinois Derby. The colt did not race as a two-year-old but has been steadily improving in his four career starts this year. Will he improve enough to take on the likes of Grade 1 winners on Saturday?

Hence ran to an 11th-place finish in the Kentucky Derby, failing to navigate the cavalry charge of the start and subsequent 20-horse field on a sloppy track. Prior to his Derby attempt, Hence broke his maiden as a three-year-old and put himself on the Derby map with a win over other hot contenders in the Sunland Derby. With a lighter field in the Preakness, we look forward to watching this colt run.

While this horse was not admittedly on my personal radar on Derby day, he silenced critics with a foot-perfect race and has been galloping like a, well, dream ever since. With the trend favoring Derby winners in the Preakness, Always Dreaming is the horse to beat.

Among the favorites for the Derby, Classic Empire was bumped at the start and then stuck in traffic for much of the race, still somehow rallying for fourth place. He is one of the most accomplished horses in the field, and with only half as many entries as the Derby to contend with he should be expected to be a serious threat.

Post Position 6: Gunnevera (15-1)
Chestnut colt by Dialed In
Owned by Peacock Stables
Trained by Antonio Sano
Ridden by Javier Castellano
Claims to fame: winner of the Jackpot Stakes (G3), second in the Holy Bull (G2), winner of the Fountain of Youth (G1), third in the Florida Derby (G1)

Gunnevera had too much of the field to overcome in the wet Kentucky Derby, where he finished seventh. This colt’s exciting late-closing sweep has earned him plenty of other top-three finishes, but with the Preakness as the shortest of the Triple Crown races it remains to be seen if he will get up in time.

Term of Art will be making his East Coast debut in the Preakness Stakes; the horse has not yet won a start as a three-year-old. He broke his maiden in October and ran a distant ninth in the Breeders’ Cup Juvenile, followed by a Grade 3 win that was intended to run on turf but got rained onto the main track. He’ll have a lot of work to do in the Preakness.

Senior Investment’s first graded start was a sixth-place finish in the Grade 2 Louisiana Derby where he was beaten by Derby contenders Girvin and Patch, among several others. He turned around in two weeks to win the Lexington Stakes in mid-April, the first graded win for a colt who likes to close late.

The odds have certainly shortened on the surprise second-place finisher in the Kentucky Derby; Lookin At Lee got a great ground-saving trip on the rail and fired late to battle his way up to second place behind Always Dreaming. Whether the colt got lucky or whether he’s true Grade 1-running material remains to be seen.

After his Arkansas Derby place, Conquest Mo Money’s connections announced that they would skip the Kentucky Derby and instead prepare for the Preakness Stakes, giving the colt more time to condition and train. While some critics called this a “cowardly” move, others saw it as a wise choice for a colt who could very well score an upset. His Arkansas Derby finish was a game fight against Classic Empire.