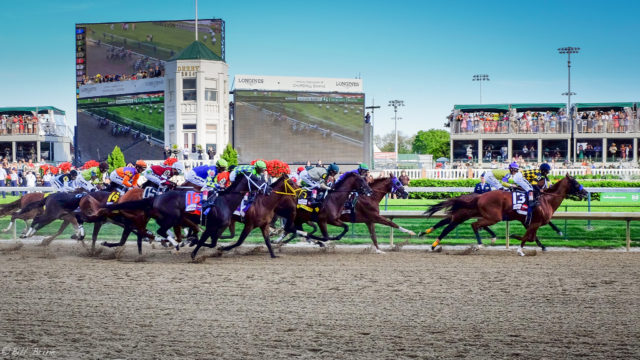 We’re just over a month away from the Run for the Roses, the most prestigious race for three-year-olds. How do horses qualify for the Derby? We take a look at the Road to the Kentucky Derby system.

It’s nearly time to find your most eye-catching hat or fascinator, mix up some mint juleps and prepare yourself for the most exciting two minutes in sports — the Kentucky Derby takes place this year on Saturday, May 6. Historically, the field was determined by graded stakes earnings, with over 300 races worldwide available to Derby hopefuls. In 2012, however, a new points system was introduced: the Road to the Kentucky Derby.

The 300-plus list of graded stakes that a horse could feasibly run to earn his qualification for the Kentucky Derby has now been narrowed to 36 stakes comprising the official Road to the Kentucky Derby, including 17 three-year-old races taking place over the ten weeks prior to the Derby. This compact ten-week schedule is branded as the Kentucky Derby Championship Series.

Each of these 36 stakes races — taking place all over the world — is assigned point values based on its grade and prestige:

New for 2017 is the Japan Road to the Kentucky Derby — inspired by increased interest from Japan in American racing, headlined by the fan favorite Lani’s Triple Crown bid in 2016, two races in Japan (Cattleya Sho for juveniles and the Hyacinth for three-year-olds) will award points with the leading Japan-based horse earning a slot in the starting gate for the Kentucky Derby.

Horses need to be nominated in order to start for the Derby. Horses who have not been nominated but do qualify for the Kentucky Derby based on their points can be supplemented for a hefty six-figure fee.

A nationwide poll showed that 83% of sports fans had no idea how horses qualified for the Derby. The plan behind the point system was to narrow down the wide field of qualifying stakes races into a smaller, more concise list of easily-recognizable races, allowing new racing fans to develop their affinity for individual horses in the build-up to the first Saturday in May.

With just a month to go until Derby Day, there are only a handful of races left — all part of the second leg of the Kentucky Derby Championship Series. These races include the Wood Memorial, the Blue Grass, Santa Anita Derby and the Arkansas Derby. The wild card Lexington is also on the schedule.

At the moment, Girvin leads the pack with 150 points. Trained by Joe Sharp and owned by Brad Grady, Girvin’s individual route included wins in the Risen Star and most recently the Louisiana Derby. The colt looks fresh, courageous and strong, finishing his races as though he has plenty left in the tank which bodes well for the mile and a quarter Derby.

Just behind is Godolphin-bred Thunder Snow with 100 points, who won the UAE Derby at the end of March. It remains to be seen if he will ship to the USA to make a bid in the Derby. Also with 100 points is Always Dreaming, a Todd Pletcher trainee who conquered Saturday’s Florida Derby.

Gunnevara, at 84 points, was an early Derby favorite; he won November’s Delta Downs Jackpot and romped in the Fountain of Youth in March. He finished third in the Florida Derby to Always Dreaming. Rounding out the top five is State of Honor with 62 points, who has yet to win a race but has never finished out of the money including a second in the Florida Derby, behind Always Dreaming but edging out Gunnevara.

With two more weeks of racing on the official Road to the Kentucky Derby, it’s too soon to call the field for certain — but it looks like a wide-open race this year that’s bound to be exciting. Keep it locked on Horse Nation for continuing coverage!

For more information about the Road to the Kentucky Derby, visit the “Horses” page on the Derby’s official website.