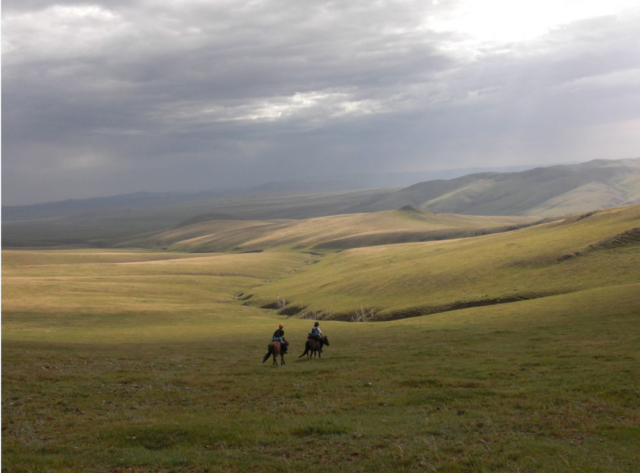 In August 2017, Leslie Wylie will be attempting her most fearsome feat yet: a 620-mile race across Mongolia. Riding 25 semi-wild native horses. Carrying only 11 pounds of gear. Relying on nomads for food, water and shelter. On a mission to stop deforestation.

Photo courtesy of The Adventurists/Mongol Derby.

Part of the fun of survivalist genre books and film is imagining yourself in the characters’ shoes. When life takes a turn toward do-or-die and it’s just you versus the world, how would you fare?

Personally, I’ve always figured that I’d be the first to go: the Hunger Games tribute who gets wiped out in the opening scene, the first sucker to get eaten by zombies in the Walking Dead, the settler who dies of dysentery in Oregon Trail as soon as you press play. I have the basic survival skills of a 10-year-old Girl Scouts dropout, and yet here I find myself, a soon-to-be-competitor in a horse race wherein just making it out alive and more-or-less intact is an accomplishment in and of itself.

Taking place Aug. 6-19 on the Mongolian steppe, the Mongol Derby is inspired by Genghis Khan’s original “pony express” — there’s no trail or set route, just 25 GPS checkpoints/horse exchange stations spanning some 620-miles. The horses are semi-feral, riders are in the saddle 13 hours a day for 7-10 days straight, and nights are spent with nomadic herding families in yurts.

This is no holiday trail ride. Maybe half who start the race make it to the finish line each year. Last year a couple folks got airlifted to Hong Kong with serious injuries, and one co-winner doesn’t even remember a couple days of the race because she was concussed from being trampled. A couple years before that eight riders were held up by motorcycle bandits. Even the luckiest folks come home with accounts of being bucked off, chapped by the elements, plagued by hypothermia or food poisoning, and chased by dogs.

I’ve followed the Derby in previous years with a mix of horror and awe. Why would anyone in their right mind want to put themselves through that sort of thing? And yet another part of me craved the experience for myself. How would I fare out there?

One day, on a lark, I filled out an application for the 2017 race. It was a slow news day, I guess, and one does what one must to keep entertained. My own life at that moment, staring at a computer screen in suburban America, felt boring; racing ponies in the wilderness on a mission to stop deforestation, on the other hand — INFINITELY sexier and more noble.

The Derby selects about 40 riders from hundreds of applications each year, so I assumed that there was no way mine would get picked. But then, inexplicably, I got a phone interview. Which I assumed I failed miserably, having pondered aloud how a box of wine was going to fit into the 11 pounds of gear riders are permitted to carry. But then, even more inexplicably, I received an invitation email:

We’re very pleased to confirm that you’ve been offered a spot on the 2017 edition of the world’s longest and toughest horse race. Congratulations, you must be made of stern stuff.

Am I? I guess we’re about to find out.

Keep up with my adventures in the leadup to the 2017 Mongol Derby each week on Horse Nation, Eventing Nation and Jumper Nation, and tune into Horses in the Morning each Monday at 10 a.m. EST as I interview Derby crew and previous competitors.

Each Derby competitor’s $12,995 entry benefits the Mongolian families whose generosity with their horses and their homes makes the race possible, as well as Cool Earth, a charity that works alongside indigenous villages to halt rainforest destruction.

Can you help? Please visit the Wylie vs. Mongol Derby GoFundMe page — all donations are greatly appreciated! Corporate sponsorships are also available and include ad space on EN, HN and JN, product reviews and usage during the Derby and much more. Email [email protected] for details.

My deepest gratitude to the following  individuals who, immediately and unhesitatingly, pledged their support toward my journey: Tricia Bateman, Lorraine Jackson, Alex Green, Linda Cochran, Katie Kelly, Brad Sellers, Jon Wells, April Kmiec, Nicole Rettino-Lambert, Jenni Autry and a few anonymous donors as well. Your belief in me is my inspiration to believe in myself.