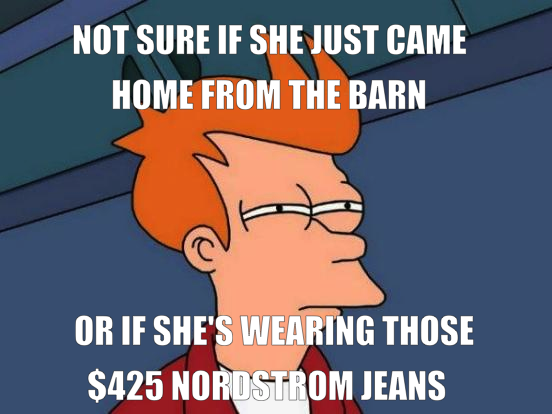 WHAT IS EVEN HAPPENING.

Nordstrom just came out with these $425 “dirty jeans” and the internet has gone crazy. What we want to know is: who needs $425 jeans when you have a horse and $20 jeans?

Now you can look like you just got done mucking the barn, riding bare back, being bucked off and trampled on without ever leaving the house!

Has society lost its mind? When did we start paying $425 for CLEAN jeans, let alone dirty ones? Remember (if you’re old enough) the stone-washed jeans look in the 80s? Then we had the bell bottom jeans in the 90s that were a throw back from the hippy days. And most recently, the already worn full of holes look that made me scratch my head. Why would anyone spend money on jeans that had holes in them already?

Now 2017 is going to be known for wearing jeans that look like you’re a real farmer. The funny thing is that the people wearing these jeans to look like they’re hard working will also have manicured hands that are softer than a baby’s butt and wouldn’t know how to hold a shovel if their life depended on it.

Equestrians have been rocking this dirty-jeans look for over a century. To think — we were the trendsetters and we didn’t even know it!

All along, if I planned to go anywhere after the barn, I would bring a change of boots and jeans to change into, because I sure didn’t think non-horse people wanted to see me like this… apparently I’ve been wrong this whole time. Now when I go out in public after spending my day with the ponies, I won’t bother to change. After all, now I’m trendy.

But the question we still want answered: what do they smell like??