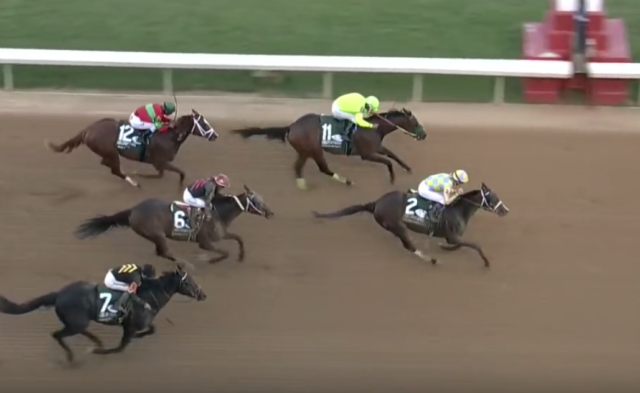 Overcoming a rough couple of months, Classic Empire has put himself back on the Derby trail.

The prospective field for the 2017 Kentucky Derby is shaping up to be full of stories — from underdogs to long shots to tales of triumph over adversity. Horse racing, after all, is a microcosm for horse life and life in general, and the recent history of the colt Classic Empire should certainly be filed in the “triumph over adversity” category.

On paper, Classic Empire looked like a clear choice in the first moments of 2017: the Breeders’ Cup Juvenile Champion was an early favorite for the Kentucky Derby, and headed into the February 4 Holy Bull at Gulfstream Park with high hopes. He finished a disappointing third, but a hoof abscess was discovered just a few days later. The abscess may have been a factor then in the development of back issues that foiled workout attempts for the colt.

Trainer Mark Casse and owner John Oxley moved the colt back to their home training base in Ocala, Florida, and soon Classic Empire was back on form. Still lacking the necessary points to qualify for the Kentucky Derby, it was do or die time — and the Arkansas Derby was the perfect race for Classic Empire’s last stand:

Classic Empire ran a tough, gritty race to get to the wire in front over fighter Conquest Mo Money, and secured his berth for the Derby as long as health remains on his side. The colt is already at Churchill Downs to prepare for the Kentucky Derby, which takes place on May 6.

Conquest Mo Money deserves a mention as well for running a great race — the colt’s connections have stated that they will be prepping him for the Preakness Stakes and skipping over the Derby, playing to the horse’s strengths and buying time to develop him further.

The Arkansas Derby is the final major prep race for the Kentucky Derby, and so far in its history, Arkansas winners have gone on to win the Kentucky Derby twice, as well as earn two seconds and two thirds. This makes the Arkansas Derby the leading prep race for in-the-money finishes in the Run for the Roses; this was the route that American Pharoah took for his winning 2015 Triple Crown campaign.

Classic Empire, like American Pharoah, is sired by Pioneerof the Nile. Will we see a repeat of history in May? Time will tell.