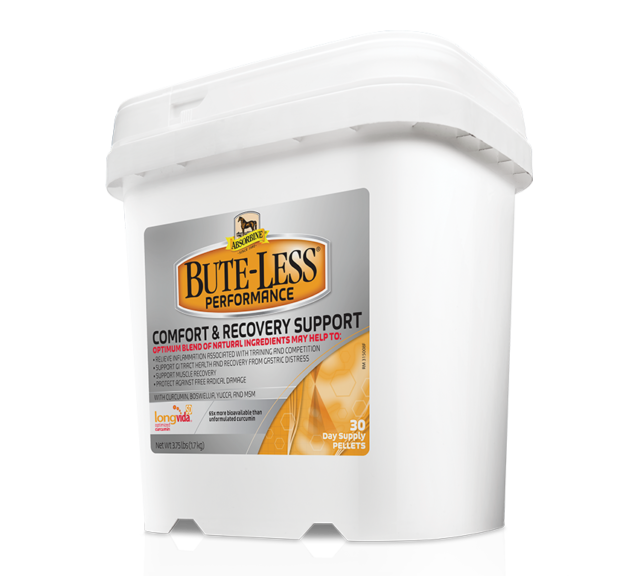 This stuff is a miracle in a box. Seriously.

Morgane here once again to tell you about another miracle equine product (and no, I’m not even kidding about that). Absorbine’s new Bute-Less Performance is literally the best comfort and recovery supplement I’ve ever used.

Now I’m sure you’re sitting there reading, (maybe scoffing a little), and thinking “well of course she’s going to say that! She wouldn’t give it a bad review. And how many supplements has she actually used like this?” So let me just start by saying that it’s true that I won’t write a bad review, but that’s not because I’m going to fabricate stories of grandeur about crappy products. It just means that if I try something that’s lackluster I won’t write the review. And to the second point, in my scaling of the dressage pyramid, and furthering my own riding education, I have ridden a lot of creaky, questionably sound creatures who needed a little support to continue educating us relatively dense small predators. As a result I have used multiple supplements designed to relieve aches and pains and restore soundness. Unfortunately, for the most part, those supplements have had only a minimal effect at best.

Given those past experiences I wasn’t particularly expecting to be impressed by Bute-Less Performance either, which made its effectiveness even more exciting. My original thought was that I would give it to Woody (who will be 20 this year) and see if it made his extreme hock arthritis a little better. I wasn’t expecting miracles, just maybe that he’d be a little less stiff. Of course Woody is a cantankerous old beast and he decided that he didn’t feel like eating the Bute-Less Performance, or his grain for that matter (this has nothing to do with the palatability of the Bute-Less; Woody just goes through phases where he’s uninterested in grain). Since it’s hard to see a difference if the horse won’t eat it, I decided that I’d see if it made Stormy any less stiff starting out.

Stormy, the APHA gelding I’ve shown to I-1, has had a rough year or so while we sorted out farrier issues and respiratory stuff. He’s always started off a bit tight and stiff, but generally warms up well. I noticed this last year after the farrier debacles that he was just a bit more consistently short to start, though still warmed up well. After ultra-sounding and x-raying many things and not finding anything particularly exciting, I assumed that this was just his new norm. After three days on Bute-Less Performance it was literally like I was riding a different horse. He came out of the stall moving like he normally does after 25 minutes of work; swinging, over the back, into the bridle. It was ridiculously impressive. I have never had any supplement work this well.

To date Stormy has been on the Bute-Less Performance for almost a month and he continues to come right out of the stall and go to work. He’s felt better this last month than he has the last two years, which is fabulously exciting. He’s gone back to schooling the ones, piaffe, and passage with far less tension and a much more honest connection.

Another nice thing to note about Bute-Less Performance is that it’s pelleted and seems to be quite palatable. Stormy actually picks his out of his grain and eats it first. I’m not a fan of powdered supplements since some horses sift them to the bottom of the bucket or just flat out refuse to eat them.

Ultimately, while I doubt any supplement would make a seriously lame horse sound, I do think that Bute-Less Performance can certainly make a horse feel his best and allow him to work at his optimum level comfortably. I would not hesitate at all to try this on any horse with minor stiffness or aches and pains. I’m even considering it as a good maintenance supplement for my younger horses.

For more information on Absorbine’s Bute-Less Performance visit the their website. You can also check out their Facebook Page for additional updates, photos, and events.