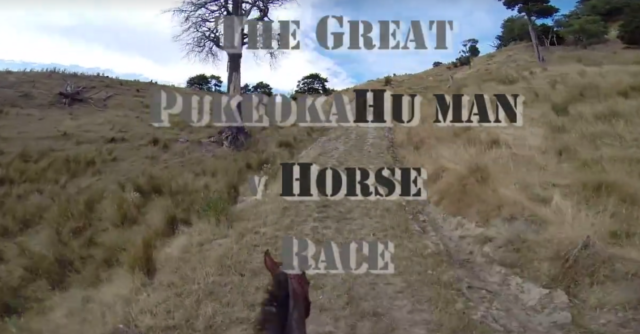 The grueling but spectacularly beautiful 42 kilometer race takes off on April 8 in New Zealand!

Going for a 42-kilometer backcountry run may not be everyone’s cup of tea — even riding that far on your trusty horse might not quite be up your alley either. For those rugged enough to take on the challenge, however, the Great PukeokaHu Man v Horse Race is exactly what you need.

The premise is pretty simple: the 42-km (or 26-mile) course winds over beautiful rugged land in the New Zealand countryside, much of it private and kindly opened up for the day of the race. Runners and riders share the same route, though with a staggered start — so horses need to be comfortable with runners, and vice-versa! The event benefits the Pukeokahu District School and the surrounding community.

The race organizers are serious about the safety of horses, riders and runners — rules include a minimum age requirement for horses (nothing younger than 5), no use of mp3 players or headphones for runners (so they can hear horses coming and don’t get run over) and no “hitching a ride” by a runner doubling up with a rider, among others. Three mandatory vet checks are in place for the horses, and all runners must carry a one-liter water bottle with them at all times with water refill stations every 4 km.

All competitors are urged to train and be prepared for this long, grueling, rugged race.

Here’s a video perspective of the race:

This is not the only human vs. horse race in existence — a well-known Man v. Horse race over 22 miles takes place in Wales annually since 1980, with legend stating that it was based in a pub debate on who would win. Typically, horses have the clear and obvious advantage… but humans are physiologically better able to handle hot, humid weather and can on occasion have the upper hand. Both times in the Welsh race’s history that a human has won, the weather was quite hot.

The Great PukeokaHu Race has only been run twice, and has been won by a horse and rider both times. However, humans have often had the lead at the halfway point. Who will win this year’s race? It remains to be seen!

Learn more about the Great PukeokaHu Man v. Horse Marathon at the race’s website (where you can view the full rules) and follow on Facebook for plenty of updates.

[A human could beat a horse – on a perfect day]