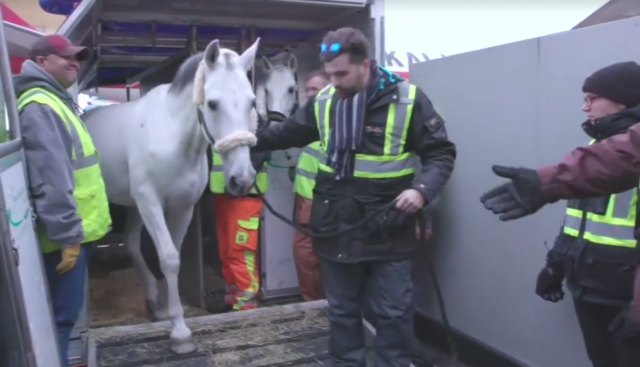 ‘The Best Show Ever’ has arrived in Chicago, preparing for an April 1 opening! This video shows us how the horses of ‘Odysseo’ travel first class.

From what we hear and see of Cavalia Odysseo, it looks like pure magic. For example, this trailer will pretty much blow your socks off:

Seventy-ish horses, over forty riders, the largest touring tent in the world (it’s bigger than a football field and weighs 80 tons) that somehow gets flooded with water, and it’s easy to forget that this is all real and not some magical dream that crept into your mind while you were sleeping.

But it’s very real (even the giant tent) and the best part is that the horses of Odysseo are respected as individual members of the cast, and their needs as living creatures are of prime concern to the human cast and crew. When the horses flew into Chicago in advance of the show’s April 1 opening in the Windy City, they not only flew in luxury but they received two weeks of leisure time to relax and be, you know, horses. Check out the video:

Odysseo’s horses aren’t just part of the so-called dog and pony show — they’re respected as the entities that they are. If you’re in the Chicago area, don’t miss Odysseo! The show runs throughout April through the 23rd.

Want to learn more? Here’s our past coverage:

You can also visit the show’s website for more details and to purchase tickets.