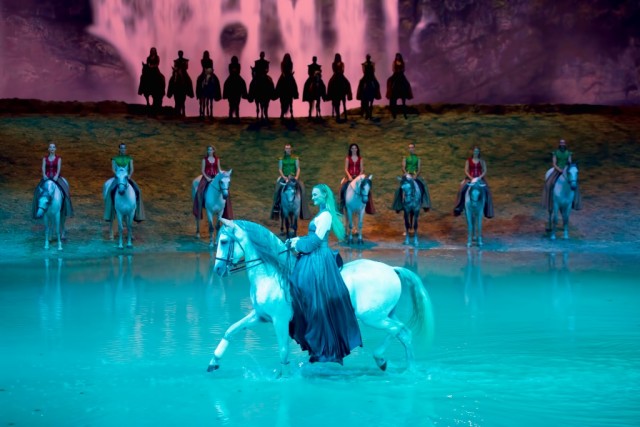 Over the next month, we plan to answer every weird and burning question you ever had about a $35 million traveling horse troupe, from setup to the final curtain. This week: you won’t believe how many people it takes to raise the tent!

#OdysseoUT – the White Big Top goes up in Sandy (UT)The Odysseo White Big Top, the largest touring tent in the world, is now in Salt Lake County (UT) in preparation for our April 20 opening night! #OdysseoUT

On a chilly March day, the white spires of the Cavalia Odysseo circus tent began to rise against the backdrop of the snowy Rocky Mountains, thanks to a team of eighty men on all sides manning machinery, cranking levers and sharing information across crackling radios. As the largest touring tent in the world — 80 tons, 1,300 tent stakes, 125 feet tall, and the same area as an NFL football field — it takes a village to make this equestrian production a reality.

Cavalia Odysseo is a circus production completely dedicated to the horse, its peacefulness, its agility and its playfulness. Creator and former co-founder of Cirque de Soleil Normand Latourelle is on hand for the tent rising ceremony, and it’s clear that even though he’s been at this for decades, he feels every bit as passionate and moved by his creation now as ever. Whether speaking of the horses, the acrobats, the tent, or the footing, he knows every imaginable detail about the show.

“There are 65 horses now, twice as many as our original show,” says Latourelle (Odysseo is a spin-off of the original Cavalia, which is currently touring in China). “We have 45 acrobats; aerialists, dancers, and of course riders and trainers, and they’re all on the most amazing stage in the world.”

It’s no exaggeration. The performance space itself is larger than a hockey rink, and sits 2,000+ spectators. “There are reasons why the tent is so big,” Latourelle explains with a dashing French Canadian accent. “I call it the first 6D show in the world. I like to invent weird stuff. We call it the 6D show because it has so many layers.” Those layers use lighting, projections, footing, performers and even 40,000 gallons of water to create something which is both an unbelievable illusion, but also incredibly real.

To put on such a show in multiple cities, there are a few key logistical elements that make it all possible.

The tent is up and the performers and horses will be arriving soon. When they do, we’ll get to see exactly what Latourelle means when he says his horses are “happy, peaceful beings that feed the soul.”