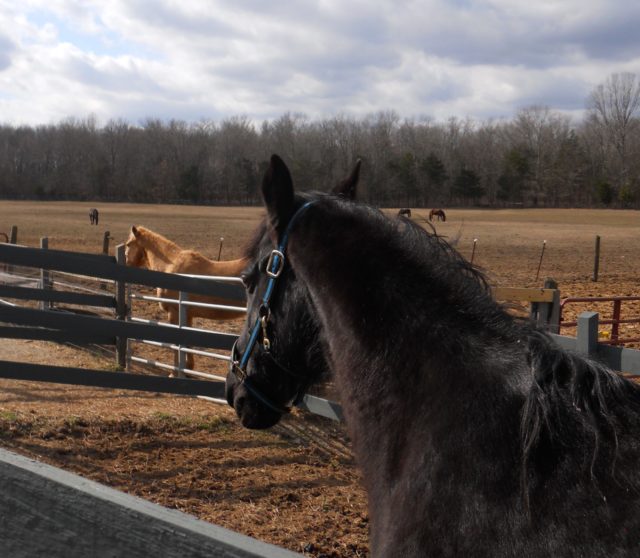 The latest from a rehabilitating performance Tennessee Walking Horse.

Our hero was trying out a new shoe when we last met in December. The shoe could only be nailed onto the front of his hoof because the sides were still too fragile to hold nails. Eighteen months have passed since Theo, a “big lick” Tennessee Walking Horse suffering with severely compromised feet in stacked shoes came to his rescue/rehabilitation/forever home.  (You can catch up on the series by clicking here.)

Not only did the shoe hold, but the sides are growing out and… Theo is now wearing a shoe that is also nailed on the sides. Ed, his farrier and the team of caretakers have dragged this horse from the edge of a losing battle to bopping around in enough of a shoe to protect his frog. Extra Bosc pears for Theo.

Theo is interacting (over the fence) with his pasture buddies. He takes full grazing advantage of his outside time. Ed and team are vigilant about weather changes because Theo still exhibits fright if pop-up rain catches him outside. Ed plans to get back to work on the inside of Theo’s head now that the horse’s feet have improved.

Theo has proved to be a stoic soldier of a horse during treatment, grooming and training. His unpredictability comes from the limitations of his previous show life. His responses to external happenings that would be normal for a horse are still unpredictable. Ed shared that getting Theo back to longeing will be part of the path to a more calm response to the big, wide world. He will relearn to stop, slow, turn and give to physical and mental pressure. Theo had shown a bright interest in learning last spring (before his hoof continued to deteriorate and saving his life was the priority). I will enjoy hearing and seeing how his schooling progresses.

Note on the status of legislation to prohibit TWH soring and the stacks and chains action devices:  the “new” old bill has been re-issued. All progress has been hauled back, in this writer’s view. Those who hold steadfast to training and showing the “big lick” are compiling a war chest to lobby historically sympathetic politicians like Senator Mitch McConnell (R-KY) and Lamar Alexander (R-TN) and Representatives Marsha Blackburn (R-TN) and Scott DesJarlais (R-TN). The money will also be targeted for lawsuits against the USDA. Postings lead me to believe they are a quarter of a million dollars short of their stated one million dollar goal. The goal could be reached during the trainers’ show this month.

The groups who are unwavering in their mission to stop the practice of “big lick” soring/training/showing are also mobilized to keep up their multi-pronged pressure.

While the humans spar, the horses stand in their stacked shoes.