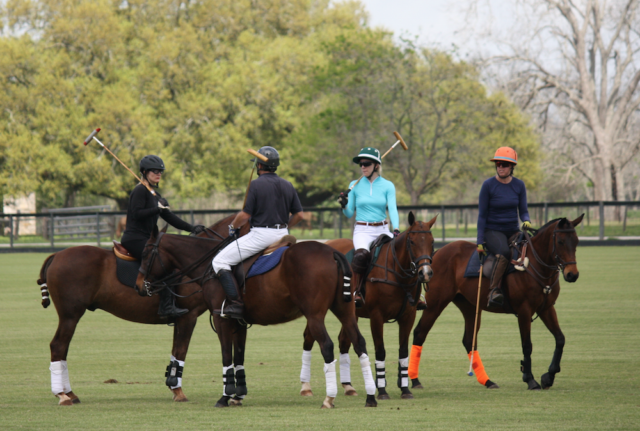 Polo correspondent Amanda Uechi Ronan recently rode in a clinic with Adam Snow, and shares her report with HN.

Two years ago, I was assigned to write an article about the U.S. Open Polo Championships held in Wellington, Florida. I knew nothing about polo at the time, but had been interested in trying the sport for years, so I jumped at the opportunity. I discovered a world rich with tradition and luxury, but also one filled with down to earth people who love to talk about their sport and their horses.

One of those people was Adam Snow… though I had absolutely no idea who he was at the time.

Still, equestrians can always talk to equestrians, and we quickly struck up a conversation about our horses and how I’d had my first polo lesson just a few weeks prior. I remember saying, “I compete in low-level eventing and jumpers.”

With a mischievous grin, Adam Snow quickly replied, “Not for long,” with the whole table nodding in approval — like they were all in on some big secret.

Fast-forward to 2017 and, well, things have certainly spiraled a bit. I’ve been playing polo nonstop, season after season since that moment, and I just purchased my second polo pony.

Me and my #polopony girls.

You would expect with his background that Adam would be a larger than life George Morris type personality that enjoys making low-level riders quake in their boots. I fussed over my polo wraps — dirty from playing a few muddy rounds of ranch polo the day before — cursing myself for not throwing them in the wash. My saddle pads weren’t exactly pristine either. George would not be pleased.

But Adam only greeted me with a warm smile, firm handshake, and the traditional polo welcome of a kiss on the right cheek. In fact, he visited all the trailers that morning while we were tacking up, addressing us by name and giving us a quick rundown of where we needed to be for the “chalk talk” prior to mounting. At the chalk talk — admitting he needed to hold a foot mallet as a “security blanket” — he was again smiling and open, allowing everyone to meet each other before he assigned us into groups of three and discussed his goals for the clinic.

Adam wanted us to learn two words above all else: preparation and positioning.

Preparation is required off the field and on. Off the field, strategy should be discussed at length so there are as few surprises during the game as possible. On the field, preparation simply means, “You can never be ready too early for the ball.” Positioning involves being aware of your teammates and opponents.

I found I could best understand both concepts if I asked myself, “Am I where I can help my teammates the most?” and only afterward worried about that elusive little white ball.

In the first exercise, Adam played the opponent carrying the ball on his offside. My teammate — R1 in the diagram — could do three things in this scenario.

Meanwhile, I — R2 in the diagram — should be prepared to do one of two things.

1) If my teammate is successful with the backhand, I need to immediately turn, go to the ball, and carry it downfield.

2) If they’re unsuccessful, then I need to take the backhand, in which case, my teammate should have already turned to go to the ball.

The second exercise was all about horsemanship. There were three cones setup in a triangle, probably sixty to eighty feet apart. I don’t think the measurement was exact, but my horse covered the distance in five to seven strides depending on pace. We extended our canter between the cones and then “rated” … another term for collected … around the cones to either make a simple turn or a small circle, maintaining an even distance from the cone. The exercise was deceptively simple in theory and much harder in practice.

The final drill was a straightforward offside forehand hitting drill. A person on the ground — Mason Wroe of Team USPA — queued up balls as we walked in a small circle around him. Our target was a second polo ball set thirty yards straight ahead. We focused on the flow of our swing with Mason pointing out glitches.

All the drills were put into practice during our round robin practice chukkers. In groups of three, we were teamed with either Mason or Adam. As we played, they instructed us, reminding us of the work we did in the drills… everything boiling down to those same two words: preparation and positioning.

Let’s see if I can master that offside forehand at the canter. Photo courtesy Josh Ronan

I cannot say enough kind words about Adam, Mason, CJ, Fairplay Farm and its owner, Esther Kane, Ricardo — who treated us with a traditional Asado barbeque afterwards — and the many other people who helped the clinic run smoothly.

Though I wasn’t able to attend, I’d also like to thank River Oaks Bookstore for hosting a book signing party, featuring Adam and Shelley’s new book, Polo Life: Horses, Sport, 10 & Zen. You can find my book review here… it’s absolutely worth a read, even for non-polo equestrians.