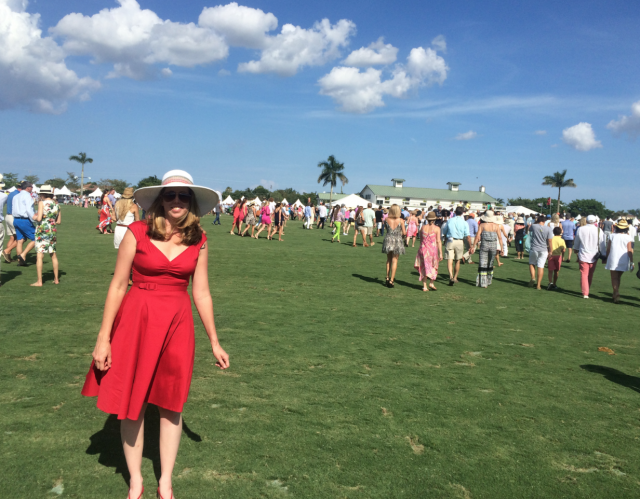 You don’t have to be rich and famous to enjoy the sport of polo. Amanda Uechi Ronan details her “queen for a day” trip to the 111th U.S. Open Polo Championship held in Wellington, Florida last weekend.

Last Sunday could have started out like any other lazy weekend day for me. I’d probably roll out of bed and stuff my face with sugary carbs before heading to my church of horse addiction i.e. the barn. But April 19th was different because I attended one of the most prestigious events in polo: the U.S. Open Polo Championships.

I know what you’re thinking. What’s a lil ol’ Texas girl like me doing in a place like Wellington?

It wasn’t too long ago that polo — playing it, or even just being around it — seemed like a just-out-of-reach equestrian daydream. When I thought of polo, I envisioned a tabloid photograph of William and Harry schmoozing it up on the sidelines between chukkers, surrounded by pretty girls in wide-brimmed hats sipping champagne. Then I participated in a beginner’s clinic at the Houston Polo Club and the world of polo started opening up to me. I leaned down, swung the mallet and had an epiphany: Polo isn’t all that different from any other equestrian sport. It’s just a bunch of horse-loving people like you and me having fun in — and out — of the saddle.

I was hooked and ready to dive straight in to the deep end, so when the opportunity arose to experience championship-level polo in Wellington as a spectator, I jumped at the chance. A journey into the heart of American polo itself? Sign me up.

My day began with breakfast on the beach. I sipped my Caramel Mocha while watching the sun rise, listening to the sounds of the ocean and digging my bare feet into the sand. I knew this would be the calmest part of my entire day and I treasured it.

Our first stop was the National Museum of Polo and Hall of Fame. Museum Director George DuPont, Jr. kindly permitted us to view the entire collection privately. It is a small museum, but one so jam-packed with information that an hour passed too quickly.

There were numerous trophies to ogle, such as this one donated to the museum by the Maharajah of Jaipor.

This strange one was labeled the “Pairs Trophy” and is dated to 1884.

My favorite exhibit was the “Horses to Remember” wall that features the best equines to ever play the sport, but the biggest display at the museum is dedicated to the U.S. Open. The first Open was held in 1904. “The Wanderers” with iconic team members C. Snowden, J. Cowdin and brothers Monty and Larry Waterbury reigned victorious that year. The tournament gained international popularity quickly, with 1910 marking the first time a foreign team, Ranelagh Polo Club of England, won. It wasn’t until 1912 that the immaculate U.S. Open trophy was first awarded. It was commissioned by Joseph B. Thomas and crafted by Sally Farnham in 1910 from pure silver.

Mr. DuPont allowed us a behind-the-scenes glimpse of the trophy’s journey to the 111th running.

Next we attended a poolside Sunday Brunch at the International Polo Club, a facility that among other things boasts a laser leveled croquet field.

The feast included lamb, steak, lobster tails, shrimp, oysters, caviar, exotic salads, and fresh fruit. Everything was absolutely delicious and I began feeling more like a queen with every passing moment.

The company was even better than the food. I was seated with Tony Yahyai and his wife from San Diego, Adam Snow (10-goal player, Hall of Fame member, and 2002/2006 U.S. Open winner) and Steve Roth, also from California.

Tony Yahyai started playing polo at the age of 51 and quickly became obsessed. “That’s all he thinks about!” exclaimed his wife. Tony grinned widely and shrugged his shoulders. “I love it,” he said simply.

“It’s about strategy. It’s a fast paced chess match. There’s also a camaraderie because it’s a team sport,” Steve added. “There’s nothing else like it.”

The idea of being part of a team and enjoying a sense of community was the undercurrent of everyone’s love for the sport.

“You can go to any polo club in the world and people are your friends,” Tony commented. He will be testing that theory very soon, as he spends his vacation visiting dozens of clubs in the northeastern United States. He is also busy constructing the first all-inclusive polo club in Las Cabos, Mexico.

Talk then turned to my own horse riding experience. “I compete in low-level eventing and jumpers,” I answered when asked. Adam Snow quickly replied, “Not for long.” The entire table agreed … once you get a taste for polo, there is no turning back.

Next, Christine Vermes, USPA Marketing Chairman, Peter Rizzo, USPA CEO, and Scott Walker escorted us to our box seats, giving us our first look at the impressive 300 yard long field.

Christine started playing polo after attending a party overlooking a similar field. She remembers admiring the beautiful horses and the ability of the riders. Five days later, she was taking her first lesson. “The rest,” she says, “is history.”

Scott said he loves the competitive nature of the game. “The two most hated words in polo are ‘Leave it, leave it!'” he laughed. “When you’re in the saddle you always want to hit the ball, but often that’s not the best strategy for the team.”

As play began, I quickly realized I was witnessing history in the making. This was Valiente’s third straight U.S. Open final appearance. Riding for them was the #1 ranked polo player in the world, Adolfo Cambiaso. Opposing Valiente was Orchard Hill who won the C.V. Whitney Cup and the USPA Piaget Gold Cup with the #2 ranked polo player in the world, Facundo Pieres, in the irons. Both men are 10-goal players, the highest ranking a player can achieve.

Facundo Pieres scored the opening goal in the first 30 seconds of play, setting up Orchard Hill to close out the first chukker 3-1. Both teams played no-holds barred, accumulating points at a blistering pace. The first half ended with Orchard Hill in front, 5-4.

Every sport has their halftime show and for polo it’s the divot stomp. The spectators are permitted to walk on the field, drink champagne and eat ice cream. This was also my chance to spy all the latest polo fashions. Bright colors ruled the day, but no single style stood out.  From sundresses to smart pant suits to denim shorts, everyone showed their own unique personality through their ensembles. Aviator sunglasses, however, are a golden rule.

Back to the action, the fourth chukker was fast! Cambiaso scored three goals, carrying Valiente into the lead, 7-5.

In polo there are no time outs to switch horses. It was a marvel to see the players jump from saddle to saddle in seconds, but in the fifth chukker Cambiaso wasn’t quite up to speed. Orchard Hill’s Polito Pieres took advantage of Cambiaso’s pit stop, racing down the field to score a point. Pieres cousins, Polito and Facundo, closed out the chukker with one goal each, bringing the score to 8-7 in favor of Orchard Hill.

In the sixth and final chukker, Facundo scored again, hurtling the ball through the goal posts from over 130 yards. Unfortunately, with less than three minutes left in the game, Orchard Hill was plagued by fouls. Valiente was awarded several penalty shots and with only one minute left in the chukker they took the lead, 10-9. Valiente’s Cambiaso put an end to the discussion as he rocketed from the pack, scoring his fifth goal and putting an exclamation mark on a decisive 11-9 victory.

Valiente fans chanted “We the champions!” as awards were handed out.

But the day was still far from over, because in polo there’s always an after-party. We were escorted to the pool area, where festivities were well underway. The live band had the music booming and hundreds of people were hitting the dance floor. Performers were scattered through the crowd. There were people on stilts starting a Conga line…

…and a lady dressed as a silver horse.

As the sun set over the IPC, I found a beach chair and enjoyed my plate of delicious asado BBQ. I watched the party revelers toast the players and realized that polo isn’t called the “sport of kings” because it’s exclusively for the wealthy, but because the community surrounding polo and the way in which the events are organized can make anyone feel like royalty. I honestly feel everyone should put a trip to the U.S. Open on his or her bucket list. Dress to the nines, drink a few adult beverages and enjoy the spectacle that is high-goal polo.

Special thanks to USPA, Keating Co., National Museum of Polo and Hall of Fame and the International Polo Club.