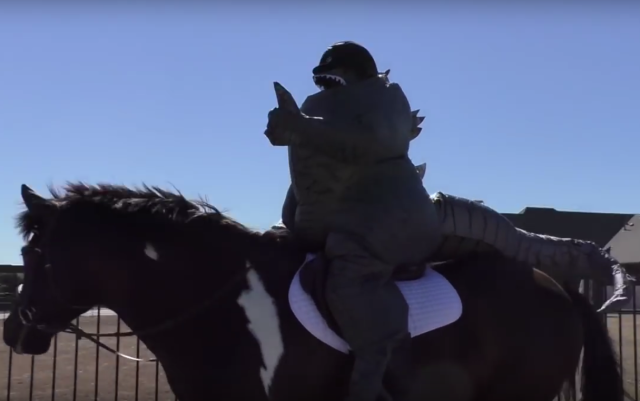 Fleek is an 11-ish year old Dutch/Thoroughbred gelding for sale through Accolade Sporthorse Sales in Prosper, Texas. Christina Kenyon Hall highlighted in his sale ads that he may be green but he’s sweet and quiet. And she got crickets.

“I had to think outside of the box,” she decided.

But Christina went not only outside the box, but so far removed from the box it may as well never have existed.

“My student Jodie had this Godzilla suit she had been dying to wear for almost a year.”

“Every once in a while, she would take it out of its box, show it to her her event horse, Sophie, and mull over the possibility of using the battery powered self-incorporated blow up fan to inflate the thing and wear it around while she rode… as, you know, training. But Sophie didn’t take kindly to flat Godzilla, so the idea of larger-than-life Godzilla just never got further than a mulling over,” Christina explained.

“Then we had a horse we needed to sell. And his strong suit was his brain.” To prove it, Jodie climbed into the Godzilla costume and then (willingly) climbed onto Fleek.

“Let me say, being Godzilla isn’t easy. Especially in a high wind. In North Texas in January, it is very likely to be windy. A lesser set of people might be put off at the prospect of having blow-up appendages to deal with in moderate to high winds on horseback, but to us at Whispering Farms Equestrian Center, if you’re in for a penny, you’re in for a pound. I also might mention that less ambitious people might take a day to test ride Godzilla on the sale horse before attempting to video tape the event. But not us. Once we (and by we I mean me) had the idea take hold, it was ‘Katie, bar the door.’ Luckily, little Fleek took to Godzilla right away.”

If I buck you off, you might eat me, see?

After initial introductions and the awkward task of mounting in an inflated Godzilla suit, Christina and the gang discovered an unexpected element of the experiment.

“The tail. Some horses can’t deal with their own tails. Imagine a spiked, whirring, inflatable dragon tail in a high wind,” Christina said. “The tail doesn’t just drape artistically alongside the subject horse. It bounces. It separates the haves from the have nots.”

Soon Jodie and Fleek walked, trotted, cantered, jumped a cross rail and then took a tour of the neighborhood. “How is that we managed to hack all around this high dollar neighborhood and not one person called the police to report a lizard in a helmet riding a horse?”

Is the bridge secure?

When all was said and done (and everyone survived), Christina went home and wrote one of the most relateable ads I’ve ever read:

“Imagine that kid in school that was voted “Most Popular” at the end of the year. The girls all called him “cute”…told him their secrets, included him at their lunch table. Moms trusted him. He was everyone’s homecoming date when the football player boyfriend did them wrong. He was the good for you guy. He grew up, graduated from school, had 2.5 children with a solid looking girl he met in college, got a Labrador retriever, and lives somewhere in the burbs…still a great, solid, hardworking dude. Mr. Reliable.

“Take that guy, put a few dozen black and white hairs on him, make him 15.2 hands of some kind of warmblood (he claims Dutch/Tb but does not have the papers to prove that) and you have Fleek. True, true, Fleek does not have a ton of formal education. But when the chips are down, it is Fleek who is going to be there for you. If you want a horse who comes equipped with piaffe, passage, tempis, and the ulcers, spook, and accent that accompanies such a beast, please scroll on. If you are looking for a horse that has been to Madison Square Garden, requires a wardrobe more extensive than J-Lo’s, and has to have shoes that are more expensive than Jimmy Choos, go to the next ad. If you want a handsome, sound, fun horse to do some flatwork and enjoy his cute jump…here he is. If you don’t mind a little bit of a project…here he is. If you value safe, safe, safe, safe…here he is. If you want a horse that is sensible enough to let us film a video this ridiculous….here he is.”

We hope Fleek finds his person, but we’re happy that at least Godzilla found a friend.

All photos courtesy of Christina Hall.