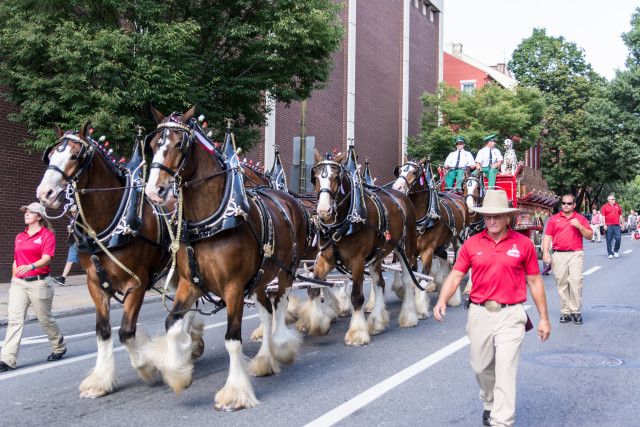 While the Budweiser Clydesdales might be the best-known of the great draft horse hitches (and the only big hitch still in rotation), commercial hitches have a long, rich history in the US. Here are a few hitches you might not know.

Arguably the most photographed draft horse hitch in the world. Flickr/Donald Kautz/CC

The Budweiser Clydesdales are hands-down the most famous draft horse hitch in the world — the iconic eight matching bays with all that gorgeous feathering, polished harness and red beer wagon have graced our television screens and memorabilia and evoked emotions in spectators from coast to coast who gather just for the briefest glimpse at these beautiful horses.

It’s hard to put a finger on specifically what it is about this enormous but impeccably-operated hitch that is so emotionally gripping to observers — is it the majesty of the horses themselves? The uncanny teamwork? Or is it the living echo of the past, the reminder to all of us of days gone by, when horses were more than a luxury but our partners in industry and agriculture?

While the Budweiser hitch might be the best-known to thunder down our parade streets these days, they’re certainly not the first commercial hitch to grab the public eye — from the turn of the century well into the 1900s, plenty of national-scale breweries as well as midwest packing houses maintained a commercial hitch, both for public events and to compete in the show ring. Breweries in particular have a long history with draft horses, relying on them not only to deliver beer but also to work in the plants themselves powering machinery.

A few modern-day companies still outfit hitches for the show ring — the best-known examples are probably the Priefert Percherons (sold in 2011) and the Ames Construction Percherons (still competing in draft shows and hitch classics today). The heyday of the commercial hitch, however, is well behind us.

It’s probably pretty safe to assume that the Budweiser hitch is here to stay (despite that moment of panic a while back when the internet convinced itself they were being retired). Other commercial hitches of yesterday were not so lucky — whether due to budget constraints or a lack of interest in continuing to furnish and maintain a commercial hitch and all of its trappings, what used to be a common and celebrated way to advertise a business has become rare indeed. The harnesses have figuratively gathered dust on the rack; the great barns no longer echo with iron-shod hooves.

This is just a sampling of the great old commercial hitches — many companies, from nationally-known brands to local-level businesses furnished draft hitches in their day.

The Armour Packing Company delivered goods at the turn of the century with yellow wagons drawn by gray Percheron geldings. In the competition ring, the Armour four-horse hitch was a winner; by 1905 and 1906 the company was showing a six-horse hitch at the Chicago International Livestock Exposition which was an invitational for the best draft hitches in the country. The show team was exhibited in Europe as well as across America with the Sells-Floto circus show as a headline attraction. [Learn more]

When Prohibition was repealed by amendment in 1933, Budwesier was not the only brewing company to celebrate with the addition of a draft horse team — the Genesee Brewing Company of Rochester, New York was famous for producing what was believed to be the only 12-horse hitch in the world, harnessing a unique matched team of a dozen red roan Belgians. The horses were hitched three abreast in four rows with a red wagon. Genesee Brewing even released an accompanying beer called “12 Horse Ale,” which, like the team, is long retired. The barn that housed the unique team still stands and harness is displayed at the Genesee Country Village and Museum. [Learn more]

The Heinz Percheron hitch was a slightly later addition than many of the others listed here — it was first put together in the 1980s to carry on the tradition of horse-drawn grocer deliveries. The eight-horse hitch of black Percherons performed in parades and exhibitions until 2007 when it was retired for budgetary reasons. The team was then donated to the US Army for use in Arlington National Cemetery. [Learn more]

The Pabst Brewery’s history with draft horses dates to the mid 1800s, when Frederick Pabst married Maria Best, whose family operated Best’s Brewing and still made use of horses to power its mills. Pabst transformed Best’s into Pabst Brewery; it was a company practice to parade its teams of horses and wagons through Chicago while delivering beer. The Pabst family purchased an entire Percheron stud farm and bred its own stock, competing with its own horses at the 1904 World’s Fair where they showed off some intricate maneuvers with a four- and six-horse hitch to win. The hitch continued to perform for a few more years, winning numerous titles before fading from history. [Learn more]

Raise a glass to the hitches of history — and go driving!