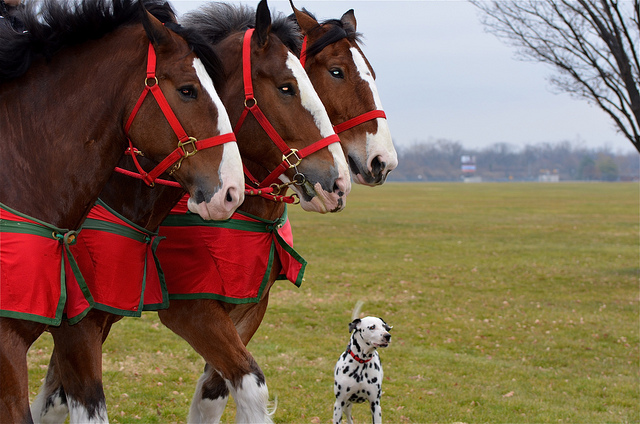 Social media went berserk yesterday with a misinterpretation of a ‘Wall Street Journal’ article — but Anheuser-Busch promises the big horses are here to stay.

When this Wall Street Journal article was published late Sunday evening, the internet went as crazy as it did when Kim Kardashian released a certain photo not too long ago — but this time, for apparently a very good reason. The article, titled “Budweiser Crowded Out by Craft Beer Craze” was followed with the tag line “Faded Beer Brand Unhitches Clydesdales in Favor of Fresher Pitches to Young People.”

Social media erupted with equestrians, draft horse folks and just all-around fans of the Clydesdales all joined together in outrage — how could Budweiser take away the very image of Christmas and the Super Bowl? How could these ambassadors of draft horses everywhere just be turned out to pasture because of the hipster craft beer market?

Fortunately, the WSJ’s angle wasn’t quite accurate. Anheuser-Bush released a statement yesterday promising that the famous bay Clydesdales are not actually going anywhere:

The story this morning may have left a wrong impression — the Budweiser Clydesdales will, in fact, be featured in next year’s Super Bowl advertising and are also a part of upcoming holiday responsible drinking advertising.

The Clydesdales play a strong role for the brand, representing Budweiser quality and care for more than 80 years. As icons of the brand — and relevant symbols of integrity, perfection and team spirit for all generations — they are important to the brand and our campaigns.

Phew. Okay, everyone can calm down now. The big boys are here to stay. And not only are they here to stay, Budweiser literally just dropped this video bomb. Two words: Clydesdale DD. (Click here to learn more about Budweiser’s actually pretty cool Lyft program.)

All hail the Budweiser Clydesdales. From being Super Bowl stars to giving drunk party people rides home, these equines are real American heroes.

Let’s celebrate by reliving a holiday moment with our favorite eight-up: