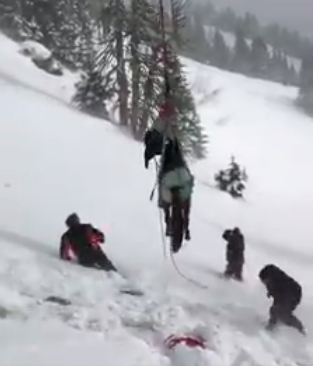 This incredibly difficult rescue was a true team effort.

On Tuesday, January 24, 2017, thanks to the tireless efforts and coordination of a team of volunteers, a horse was rescued off a remote mountainside in Idaho and delivered safely to recover at Idaho Horse Rescue.

The horse was part of a trio of abandoned or estray horses who somehow found themselves wandering up into the mountains. There are no known wild horse herds in the area so it is unlikely that these horses were mustangs. One of the horses was recovered by Idaho Horse Rescue over the January 14-15 weekend, but the remaining two — a black horse and a gray — remained trapped in the mountains near Boulder Lake.

Thanks to pilot Mike Dorris, the two horses were spotted in a bowl valley not regularly accessed by snowmobile. Two snowmobilers, Jeff Snyder and Ryan Miller, found the horses based on Dorris’ original spotting and hauled hay and water up the mountain, later assisted by Pat Morell. Meanwhile, Idaho Horse Rescue president Robert Bruno worked with the Valley County sheriff’s office as well as other resources to coordinate a daring rescue — lifting the horses off the mountain by helicopter.

On Tuesday, all of the many moving parts finally came together — the weather, the helicopter, the appropriate sling and lift equipment and more snowmobile riders to assist on the ground. The rescue team made its way to the black horse, sedated him carefully and with some skilled flying by helicopter pilot Guy Carlson, the horse was lifted to safety.

Here is “Ryat” landing safe and sound: his name is a combination of Ryan and Pat, two of the snowmobile riders critical to his survival.

Unfortunately, the gray horse was last spotted early last week and had not been seen since despite efforts to locate it. It’s suspected — but not yet confirmed — that he or she may have died in the trees and has been buried by snow; Idaho Horse Rescue is currently seeking infrared or heat-seeking cameras to attempt to locate the horse if it is in fact still alive.

In the meantime, Ryat is recovering and recuperating at an Idaho Horse Rescue facility. If you’d like to stay updated on Ryat, as well as the first horse that was rescued, follow Idaho Horse Rescue on Facebook; there are many dramatic photos from the rescue. Donations can be made at Idaho Horse Rescue’s website to support the recovery of the Boulder Mountain horses.