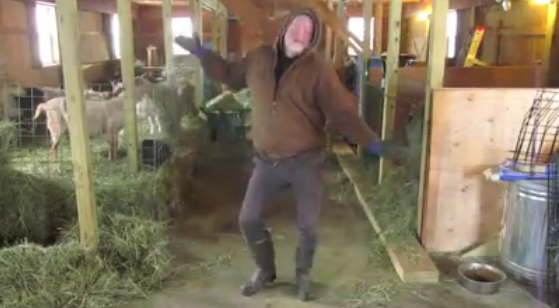 Who ever said barn chores have to be boring?

First Jake Nodar and his pony Tyrion burned down the internet with their pas de deux to Sia’s hit “Cheap Thrills,” and now the internet is going wild over a farmer’s solo dance performance to the same song.

Watching New York farmer Jay Lavery bust a move in the barn aisle while his goats look on might be one of the happiest things we’ve seen so far this year. The carefree joy of the moment and the unusual setting for a dance floor has captured the attention of millions of viewers, and we just can’t stop watching.

The video has been viewed over 8 million times on Facebook and that number continues to increase. But Jay explains that dancing isn’t just a way to stay warm while doing barn chores. For him it’s a method of pain management:

“What most people don’t know is that 15 years ago I had a traumatic back injury that caused me to have several back surgeries including a discectomy and a spinal fusion and never ending back pain. Dancing along with yoga and meditation are my only alternatives to pain medication. So I hope this can inspire anyone to move in spite of pain and I hope this puts a smile on your face for the New Year.”

So get out there and get moving, be happy and dance like no one is watching.