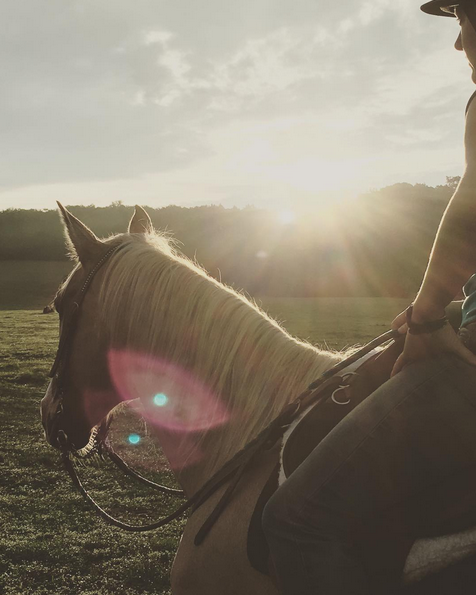 This was it. The perfect day. Don’t blink. Photo by Kristen Kovatch.

When is the perfect time to ride? (Other than “any time you feel like it.”)

January: Temperatures are below freezing in most states. You’ll have made plans from previous years to take your horse ski-joring, but when the day actually comes, you’ll find out your horse is petrified of pulling anything with a rope. All other days of the month you’ll be wondering if your fingers can actually shatter from being too cold.

February: This month is just like January,  but with more blizzards. You’ll be wishing by now that you boarded at a place with an indoor arena. At least this month isn’t as long as January.

March: Muddy. Time for mud fever and scratches and early April showers. You will be impressed with how many muck boots you will lose in your corral while trying to catch your horse.

May: Those May flowers = allergy season. Between blowing your nose 24/7 and counting all the hives poking through your horse’s coat, you will find yourself lucky if you have any time to ride.

June: Fly season. Here’s to the beginning of three months of sheer torture. Time to dust off your fly sheets and load up on your arsenal of fly repellents. You might catch yourself wishing it was January just so you won’t have to deal with those bloodthirsty little flying a$$holes.

July: It’s officially too hot to ride. 100 degrees at one in the morning. You’ll try to take your horse swimming to find out he has a severe dislike to water and likes to buck every time he sees a wave, after hauling him seven hours to the beach when fuel will be $5 a gallon.

August: You officially HATE flies and can’t wait for January.

September: The kids are back in school and the weather is perfect for riding. Too bad your horse is lame from a stone bruise he got in the padded stall he was in all summer not being rode because it was too hot and buggy.

October: Hooray! Perfect riding weather but now it gets dark at four PM… and you don’t get off work until five.

November: Hunting season. All month long your horse will be in a tizzy because he is deathly afraid of gunfire and all your favorite trails run through public land.

December: Snow, snow and more snow. It looks like it’s going to be a white Christmas, New Years, President’s Day and St. Patrick’s Day with the amount of snow outside.

You catch yourself looking on Zillow in your spare time. Arizona looks perfect right about now.

Is it June yet?