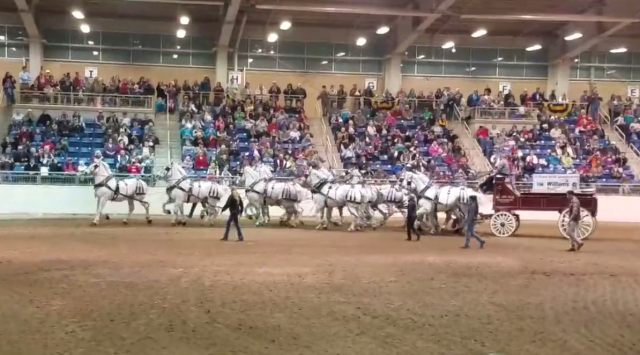 We’ve long admired David Rohrbach for his ambassador role for the world of draft horse driving and his love for unique hitch configurations. Rohrbach is the only documented driver to attempt the pentadom, or “suicide hitch,” in which five horses are hooked single-file, and his well-broke Percherons have graced the screen on multiple television programs such as My Big Fat Gypsy Wedding and Say Yes to the Dress.

Rohrbach is at the Pennsylvania Farm Show this month, both as an competitor in the show’s draft horse classes and as an exhibitor to present his talents to the crowd. Last night, attendees were treated to a true spectacle as Rohrbach once again hooked his 15-horse “pyramid” hitch:

Talk about horsepower! Rohrbach last performed this configuration at the 2014 Farm Show. All of the horses have come through Rohrbach’s barn at one point, whether they are horses he currently owns, horses he trained or horses he sold, so he maintains a level of connection and expectation from having worked with each of the 15 horses. It’s also a really cool representation of his life’s work as a horseman.

The Pennsylvania Farm Show runs through January 14, so there’s still time to swing by and see what else Rohrbach might get up to this week with his big horses!