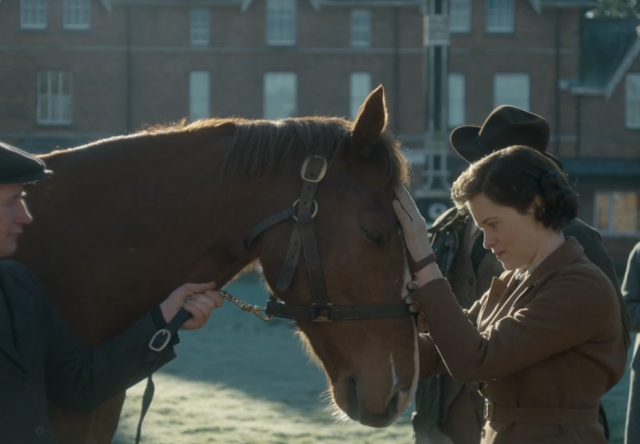 Golden Globes, schmolden globes — Netflix’ original series might have won for Best Drama but how does it hold up for Accurate Horse Scenes? We take a look at the real history and the episode featuring the queen’s great Thoroughbred. (Spoilers!)

Netflix’ original series The Crown won Best Drama TV Series at the Golden Globes on Sunday, with leading lady Claire Foy also taking home Best Actress in a Drama TV Series. Portraying a fictionalized account of Queen Elizabeth II’s private life, the series begins just before Elizabeth is crowned and follows the early years of her reign. And since Queen Elizabeth is something of a Horse Nation hero for her lifelong love of horses, it only made sense that I be drawn to this series from the get-go.

Like any TV series, it’s perhaps not for everyone — my husband tolerated it, but finds the character-driven drama to be a bit of a snooze compared to, say, Vikings, while I enjoyed the zoomed-in and behind-the-scenes personal side to the throne, even if certain aspects carried plenty of artistic license. And of course, for me as a horse lover and racing aficionado, I watched the equine scenes with a more scrutinizing eye than most.

Netflix does have a strong tradition of fairly accurate horse portrayal in its original series. I’ve gone on record praising Marco Polo for its on-point representation of Mongolian horses not as the great chargers that might have made for stunning watching but the scrappy tough-as-nails ponies that they really are. I never really got into the series Peaky Blinders (fun fact: my husband calls it “Poky Blisters” every time it pops up in our queue) but HN head editor Leslie Wylie reported to me that there’s a healthy amount of fairly accurate-looking horse racing and the horses don’t seem to be constantly whinnying or making weird noises like you might see in other television or film.

So how does The Crown shape up in its treatment of the equestrian scene? After all, horses have been an important aspect of Elizabeth II’s personal life — to overlook them completely would certainly be a failing from a production point of view.

There are plenty of scenes of Elizabeth’s sister Margaret riding (typically for secret meetings with her love interest) as well as a liberating gallop down a Scottish beach starring the Queen Mother and family friends. All of these scenes are presented in such a way that we as viewers accept that riding is as natural to this family as walking. Sadly, there aren’t many scenes of Elizabeth in the saddle herself, merely visual hints that she’s either preparing to head out on a ride or is just coming in.

In Episode 9, however, we’re treated to plenty of equine drama, with the main focus on Elizabeth’s champion racehorse Aureole. We meet “Porchey,” or Lord Porchester, who identifies himself as a horse breeder and whose fiancée hints at some emotional connection between him and the young queen, which Porchey dismisses. Our next glimpse of Porchey captures him answering the telephone, with none other than the queen on the line:

Elizabeth: Am I disturbing?
Porchey: No.
Elizabeth: Good. It’s Aureole. I think we’re making a mistake. I think we should lead from the start.

I’m not 100% sure that a non-horse person would have picked up on what on earth they’re talking about right off the bat — Aureole was one of the queen’s most famous racehorses, who for a long time seemed to be eternally cheated of true stardom, finishing second or worse in most of England’s great three-year-old races. Porchey served as the queen’s racing manager.

Like a typical protective horse mom, Elizabeth is concerned not only that their racing strategy does not play into Aureole’s strengths but that he’ll “play up” at the start. Aureole was, in fact, a noted hothead, and often delayed the start of races due to his antics going to post. Many offspring of Aureole’s sire Hyperion were known for these characteristics.

Elizabeth: Can I just say one more time, for the record, I think we should start fast and run at a good clip.
Porchey: Noted.
Elizabeth: I am right sometimes, you know. Even you said yourself that I have good instincts.

Hey, she has a point — Queen Elizabeth, through her entire equestrian life, has been said to have excellent instincts with regards to her horses, including successful pairings at stud.

According to reports of this anticipated race — the King George VI and Queen Elizabeth Stakes, called “the King George” — Aureole was slow at the start, so Elizabeth’s instinctual advice never came into play. However, he did fight his way to the lead and won the King George by three quarters of a length. In the episode, fuzzy black and white footage from the race itself plays, cutting to Elizabeth and the rest of the royal party celebrating in her box as Aureole captures the win.

Aureole comes home to the yard to applause from the stable staff, and is presented to Porchey and Elizabeth. Here’s one of our first big moments where the astute among us might suspend a bit of disbelief, as Elizabeth walks right up to the bold chestnut and strokes his face, calling him her champion. Accounts of Aureole state that he was really not much of a cuddler… apparently he was more likely to perhaps bite you in the face. It’s a beautiful moment in Netflix’ depiction, so I’m going to let it slide.

But let’s talk about the equine actor that plays Aureole for a moment — casting did a great job of finding a Thoroughbred-type horse with the same big bold white blaze that made Aureole distinctive, and in the brief glimpses we get of Aureole on the training track, the animal actor is just as fiery and restive as the real horse was said to be, fighting the bit and tossing his head. Props to Netflix on this one, because they could have just as easily thrown in any ol’ bay horse and called it good enough.

Porchey: I remember getting the phone call from your father, when he was born… by Hyperion, out of Angelola.
Elizabeth: Yes, we gave him his first milk, remember?
Porchey: Watching him grow up, everyone though his elder brother would be the star. Your clever papa always had an instinct for this one.
Elizabeth: It’s the underdog.
Porchey: And he backed him. And an underdog became a star.

I could not find any record of an “elder brother,” but Hyperion was a wildly successful sire with a long progeny list, so it’s certainly possible. King George VI died in 1952 before Aureole made his track debut, so whatever he saw in the colt is left to our imagination for now. I suspect that this little exchange was thrown in as a metaphor for King George VI, the younger brother who ascended the throne when his older brother abdicated.

Really, while all of the scenes at the racetrack, the training ground and the stable are lovely, they’re meant to serve as a magnifying glass for the tensions in Elizabeth’s marriage with her husband Philip. As the elegant and always-cool Princess Margaret points out — from the saddle of her lovely dappled-gray steed, while smoking a cigarette without a care in the world:

Margaret: When a man’s had a drink, that’s when the truth comes out.
Elizabeth: No, that’s when the nonsense comes out. Besides, we have interests in common.
Margaret: Horses aren’t an interest for you, they’re a passion. A passion your husband doesn’t share.

Um, PREACH, woman. That’s perhaps the truest line in the entire series so far. Horses aren’t a hobby, and without an extraordinarily understanding significant other, the passion can definitely strain a relationship — or in this case, highlight a relationship already feeling the stress and pressures of the crown and a struggle to balance power between husband and wife.

This conflict is further highlighted in an awkwardly painful conversation between Elizabeth and Philip about the decision to retire Aureole to stud (Philip finds the discreet and proper industry term “cover” to be much less interesting than “shag”) in which Philip suggesting between the lines that there’s still some element of romance between Elizabeth and Porchey.

This unresolved discussion reaches a new level of cringey awkwardness when we witness Aureole’s first cover (our second major suspension of disbelief, unless we should expect that the show fast-forwarded at least six months in a matter of minutes, which is of course possible). Philip is about as crude as a high school boy while the deed is done (as an aside, I’m pretty sure they legit bred two horses for the making of this episode, jeepers!), making a few crass jokes while Elizabeth patiently tries to explain what’s going on. The scene ends with Philip angrily stalking back to the car to wait.

The main facts driving the plotline forward in this episode are accurate — Lord Porchester was the queen’s racing manager, and there was plenty of speculation at some secret relationship between him and the queen which both parties denied. Aureole, of course, was a son of Hyperion out of Angelola, winning the King George as his last great victory before retiring to stud. And the attention to detail (for the most part) elevates what could have just been a series of easy metaphors to an accurate piece of art for the screen. Horses may not have been the main focus of The Crown, but Netflix makes sure the details, however small, are right.