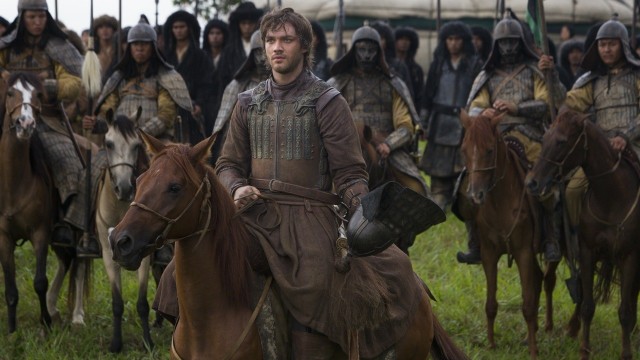 If your Netflix criteria includes “historically accurate representations of horses” then Marco Polo is a winner.

Thanks, Netflix — you’re making it easier than ever to binge-watch entire TV series in one sitting thanks to your new practice of releasing made-for-internet-TV shows all in one go. And that’s basically what happened in my household when we stumbled upon Marco Polo, often described as “Netflix’ answer to Game of Thrones.” With a comparison like that, how could we go wrong?

The premise of the series focuses on Italian explorer Marco Polo’s time spent in the Mongol court of Kublai Khan in the 13th century, during the Khan’s rule over parts of China. Some of the details on the nature of Marco’s time spent in service might be a little squiffy (in the show, he’s sort of abandoned there by his father and told to make nice and not be killed… not sure how accurate that part was, but it made for good TV). In an accurate imitation of Game of Thrones, there are gratuitous (and kind of ridiculous) orgies and blood-spurting action that blends good ol’ swordplay with the most insane kung-fu movie you can imagine. The fine details of the Khan’s court down to the costuming and character names create a rich and layered world, even if some of the day-to-day history might not be what you read in your middle school textbook. But who really needs to know all that? Let’s look at the horses.

“May our horses be swift and our arrows true.” –Kublai Khan

Mongolian horses aren’t the huge chargers that carried knights across Europe — they’re technically ponies, hardy little creatures that survive to this day foraging on the steppes. The Mongols as conquerors were famed horsemen, swooping down upon their enemies on their swift-footed ponies. Mongol military strategy relied most upon cavalry archers with support from light and heavy cavalry. Because the ponies were so hardy, they could survive on little feed, meaning that the Mongols could move swiftly across Asia in any conditions.

But the Mongols loved and respected their horses as more than just war mounts: the horse was viewed both as a symbol of wealth and a crucial partner towards survival. Mares were milked as a source of food to the Mongol; in the show Kublai Khan is constantly drinking a potent brew of fermented mare’s milk. The Mongols were accomplished horsemen and a warrior’s ponies were said to come to him at a whistle. Mongols did not use spurs, though they did use a whip (but only behind the saddle — to use the whip ahead of the saddle was a great crime. Kind of like the equitation ring). Mongolians make their own tack and typically ride in a snaffle.

“How shall I tell of the Mongolian ponies? He is a fine and hardy breed. Unlike some steeds in Europe, he needs not rest nor coddling.” –Marco

In a rare feat among television and movie horses, all of the Mongolian mounts in the Netflix series are accurately depicted: they are small, scrappy ponies, decked out in traditional and historically accurate tack. The actors reportedly went to the stables for riding lessons daily during filming, honing their skills as riders; actual Mongolian horsemen were hired as riding extras. While there aren’t any traditionally drool-worthy horses starring in the series, it’s refreshing to actually see horses depicted accurately as partners and warriors in their own right on the TV screen.

“All Mongol women are born to the horse and the bow.” –Kokachin

Overall, reviews of the series are mixed: the pacing is a little slow, and some reviews criticize the “white man in Asia” plot line. However, other reviews praise the film for bringing an accurate portrayal of an otherwise little-known facet of Marco Polo’s life as well as Asian history and culture to the general public. In terms of the horses alone, I’m giving this one two thumbs up.