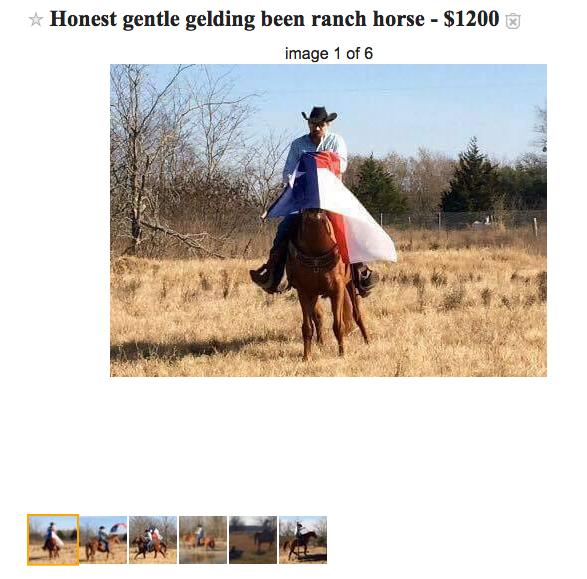 It’s the Golden Anniversary of Best of Craigslist! To celebrate the occasion, we’ve got a golden round-up of terrible ads.

Best of Craigslist (and Facebook, and equine advertising sites … we don’t discriminate) is a constant treasure trove of the fascinating, the bizarre and the tragically misspelled. We gather the best (and worst) that the internet has to offer and package it up in one neat post for your reading enjoyment.

While it’s fun to giggle at classically atrocious spelling and ridiculous photos, we also remind readers that sometimes Best of Craigslist can lead to fairytale endings as well — where we can, we try to link to the original ad so interested readers can contact the seller.

We’ll start things off with a Best Tack of eBay, from Lynn: “The look in this horse’s eye… He will get his revenge served cold. Revenge when you least expect it but he can wait.”

Okay, the mare sounds like a lovely creature, truly — but we’d love to know what the front half looks like. Submitted by Morgan:

Game of Thrones has permeated…everything. Submitted by Rachel:

Well, this is certainly an honest reason for sale. Submitted by Morgan:

Even if we ignore the spelling, the pasture companion of what appears to be a washing machine is kind of a weird choice. And we’re not even going to touch this tack setup. Submitted by Samantha:

Jenny states “This horse is a saint.”

Definitely not going to put this guy in my speed dial. Submitted by Morgan:

This saddle ad should bring a smile to your face, from Jill. Over-the-top is the new normal.

And we’ll close out this collection with a gem, submitted by Maria. We’re choosing to assume that no one is actually trying to give away this 32-year-old horse but instead just publish an irreverent ode to the old guy…