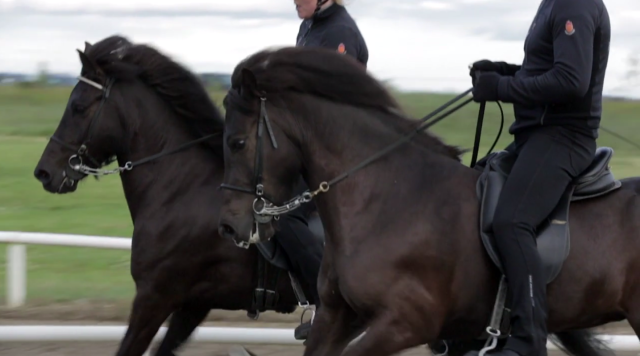 Let’s take a moment and remind ourselves of the textbook definition of horses and ponies, which all good equestrians learn about the age of 6 or so: a horse is anything over 14.2 hands; a pony is anything under 14.2 hands. Right?

Wrong. Case in point: the Icelandic horse, which based on a brief visual inspection appears for all intents and purposes to be a pony, but is, in fact, a horse. (Really, just ask head editor Leslie Wylie, who tölted her away around Iceland last year and mistakenly called her mount a “pony.”) Might they be shorter than 14.2 hands? Yes. Are they bedecked with oodles of fluffy mane and shaggy coats and other pony-like features? You betcha. Are they ponies?

In reality, the whole pony/horse debate has a few proposed theories: as shown in the video above, the Icelandic horse certainly possesses a horse-like temperament and personality; additionally, the breed’s physiology allows them to carry a horse-sized load (such as a full-grown man) in a pony-sized package, which classifies them in Icelandic horse lovers’ minds as horses.

Whatever the theory, we’re confident in stating that Icelandic horses are awesome.