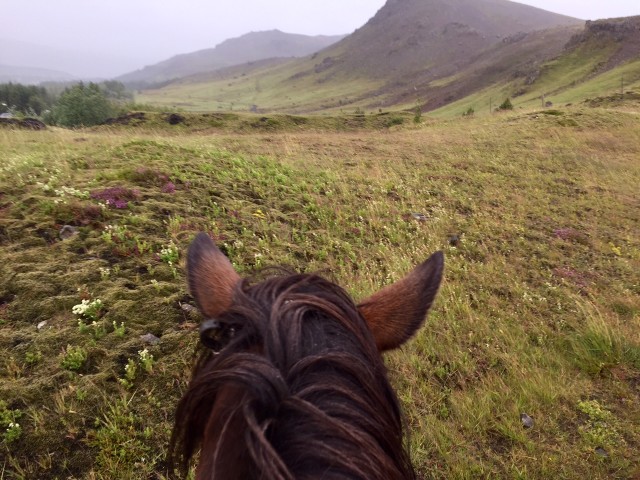 Leslie Wylie keeps a firm grip on the reins and a loose grip on her mind during a recent trip to Reykjavík, Iceland.

Before I went to Iceland I had a working theory about the place: in short, that it doesn’t actually exist.

Every photo I’d seen of it seemed too strange, too dramatic, too otherworldly to be real. Seriously, do a Google image search for “Iceland,” look me in the eye, and try to tell me it’s not all just one big Photoshopped hoax. Well-played, Iceland tourist board. But we’re onto your game.

So it was with a healthy amount of skepticism that I recently boarded a plane for Reykjavík, Iceland’s capital and largest city. My bestie Kristi and I were celebrating our 15-year friendship anniversary and we figured, why not take a trip to a random country that may or may not exist? YOLO!

Besides which, we’d found super cheap tickets via a new low-cost airline called WOW that offers oversea flights out of Boston and DC. Prices fluctuate by season but if you play your cards right you can get a round-trip ticket to Iceland for under $400. So even if we got there and discovered that the whole thing was a big cardboard set with stuffed animal puffins, painted-on icebergs and projector set northern lights, it would at least be worth a good laugh.

Our initial impressions upon arrival don’t do anything to help Iceland’s case. The shuttle ride into Reykjavik may as well be a bus trip across the face of the moon. Outside the window, fields of craggy lava rock stretch out as far as the eye can see; a lilting voice on the intercom explains that Iceland has 30 active volcanic systems which, as recently as earlier this year, have paved similar lunar landscapes across the island. As usual my mind wanders off to a dark place, some morbid fantasy involving a tidal wave of molten lava. I have to remind myself that since Iceland is fake, the volcanoes are fake also, and fake volcanoes cannot kill you.

Suddenly, the city of Reykjavik rises up in the distance. It is illuminated by a bright, creamy laser beam of light emanating from a fold in the sky we can only assume is a wrinkle in the time-space continuum. Kristi and I look at one another gravely. It’s worse than we thought. “Sun projector,” I whisper. “That’s where the holograms come from.”

In the days to follow, our “expeditions around the island” only confirm our worst suspicions: that we are not actually in Iceland but still on the plane back in the States, hooked up to IVs that are pumping us full of sedatives and false memories. They even planted these photos on my iPhone.

But what really slayed me was the horse thing. Exhibit A: this silhouette of a random windswept Icelandic Horse at the crest of a hill, gazing out across blue mountains. Clearly, it’s an Inception-like manifestation of my own subconscious.

Or, at the very least, a cleverly positioned statue.

Being a connoisseur of real horses, I decide it warrants further investigation. We make arrangements for a horseback tour with Eldhestar, one of several companies that offer equestrian sightseeing expeditions in the Reykjavik area.

Eldhestar’s tour menu is extensive, ranging from half-day treks to week-long experiences. Each one has a theme, ranging from “The Beach Ride” to “Horses & Puffins” to an “Elfin Tour” that is a favorite amongst kiddos and grown adults alike. Iceland fun fact: Surveys suggest that over half the country’s population believes in the existence of elves.

We went with “Horses & Hot Springs,” a cozy-sounding contrast to the cold, blustery weather. Iceland, as the name suggests, isn’t the warmest cookie on the tray. While summer temperatures average in the 50s, the weather during our stay was significantly cooler — most days I layered on all the clothes I had and brought a raincoat along for good measure.

The show goes on at Eldhestar rain or shine, and the first thing we do when we get to the farm is raid a room full of rain gear, rubber boots, hats, scarves and gloves. We’re sorted into groups and assigned mounts from the herd of some 300 Icelandic Horses that belong to the farm.

Earlier in the trip I’d made the faux pas of referring to Icelandic Horses as “ponies” (because, sorry guys, most of them technically are). The natives don’t take kindly to such insults, however, and I was swiftly corrected.

Iceland takes its horses seriously. The breed dates back to the 9th and 10th century, when equines were first introduced to the island by Norse settlers. Selective breeding coupled with natural selection — if you’re going to live on the side of a volcano, you better be tough — produced the strong, resilient, even-keel Icelandic Horses of today. Furthermore, the breed’s integrity is fiercely protected: it is strictly forbidden to import horses into the country and a horse that has left Iceland, even if just for a show, can never return.

My steed is Ella, a kind-eyed bay mare who with a tousled mane and a love of fast food.

We head out toward Reykjafjall Mountain, which I’m pretty sure I’ve seen before on Game of Thrones or Lord of the Rings.

Our guide, Meja, asks us if we’re ready to pick up the pace. Duh! This is the moment I’ve been waiting my whole life for: my very first authentic Icelandic tölt.

Meja instructs us to sit up tall, with weight back in our seat, positive tension in our torso, legs long and an elastic contact with the horse’s mouth. If the rider is too relaxed and the reins are too loose, the horse will just trot; if the rider is stiff and pulling on the reins, the horse will go into a slow “piggy pace.”

A tölt-ing we go! Suddenly we’re flying along in four-beat time. Ella is my magic carpet ride, smooth and low to the ground, floating from fern-carpeted green forest…

This is where the elves live.

Then we arrive at the ride’s headline attraction: the hot springs. All around us, steam is billowing up from holes in the earth. Even from the trail you can hear the water boiling, and it’s bizarre to imagine that there’s red-hot magma churning somewhere deep beneath our horse’s hooves. There are danger signs along the trail urging people to stay on the path as the ground can get quite hot and new holes are prone to opening up suddenly. Meja points to one that wasn’t there the week before and warns, only half-jokingly because she knows how chilly we are, “These aren’t the sort of hot springs you want to go swimming in!”

We turn back for home, stopping a few moments first to warm our spirits with hot coffee and cake.

And then we’re off again. It’s raining now but no one seems bothered. Kristi observes, “It doesn’t even feel like real rain.”

Her comment must have irritated someone up in the Hunger Games control room, who decides to teach us a lesson by cranking the rain lever up to 11. Suddenly it’s coming at us head-on, an onslaught of tiny ice-cold needles aimed straight at our faces. I drop the reins completely and hunker down into Ella’s mane. I wouldn’t normally trust an unfamiliar horse with this sort of “Jesus take the wheel” move — and as a rule I never trust a pony with anything — but desperate times call for desperate measures.

Ella steps up to the plate, tölting along the trail like a tugboat through a storm. Soon, with as little warning as it had begun, the rain stops. I guess we passed the test. I wonder what scenario the puppetmasters are scheming up next. Volcanic eruption? Rabid polar bear attack? Entrapment in the belly of a whale?

Happily, we soon find ourselves back at the stables. I give Ella a hug (“To the rest of the world you might be a pony, but you’ll always be a horse to me!”) before heading over to the warm, dry lodge of Eldhestar’s eco-friendly hotel.

Despite looking and feeling like half-melted human popsicles, Kristi and I can’t stop giggling. Truly, it’s been an unreal day.