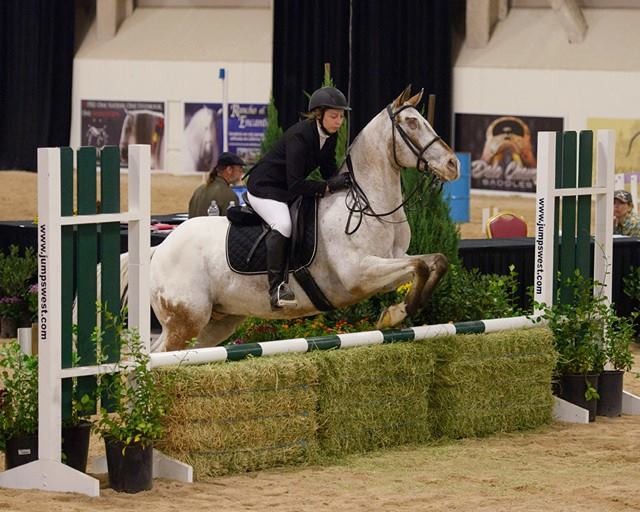 A hotly-deliberated rule would bar horses with complete loss of vision from competing — which currently includes a particularly high-profile horse named Endo the Blind. Biz Stamm brings us the scoop.

Working equitation is a fast-growing and exciting discipline, preserving the working traditions of jobs which required a well-broke horse to handle cattle in the field. Horse and rider must display their training through dressage, an obstacle course including aspects of fieldwork a working horse could expect to encounter and a timed speed run through obstacles. Team events also include the working of cattle.

In an attempt to unify working equitation competitors across the United States, a cooperative effort was proposed among the three leading working equitation organizations in the country: Working Equitation United, Working Equitation International Association USA (WEIAUSA), and United States Federation of Working Equitation (USFWE). One of the main goals of this effort is to create a consolidated rule book that would govern all recognized  competitions making it easier for riders to compete in more shows, and increase the chances that U.S. riders would have the opportunity to compete in world championship shows.

Most people who are familiar with working equitation in the United States are aware of Endo, an Appaloosa gelding who lost his eyesight to uveitis, yet is still a competitive working equitation mount. Endo is currently the only actively competing horse that would be affected by this rule change. We’ve featured Endo on Horse Nation — if you’re not familiar with his story, click here to catch up.

On December 8, Endo’s rider, Morgan Wagner, distraught over the prospect of being kept out of competition, posted the following statement on the Endo the Blind Facebook page:

The text reads as follows:

Wow, I don’t know how to describe the way I’m feeling right now. The 2 other associations in US Working Equitation WEIAUSA and USFWE are pushing for a ban on blind horses in competition. WE United is fighting for us to stay.
There is and has only been Endo. This hurts me deeply because my message with Endo is blind horses are still capable of anything a seeing horse can do and with love and trust anything is possible.
He has competed the last few years with zero! incidents so I feel this is also unfair singling out with hidden agendas.

Here’s one of my favorite moments in WE. It’s Endo’s first National show (2nd lifetime). We practiced at home on smaller bales but these were much bigger and placed on their taller sides. I didn’t know what to do but came up with the idea to let him touch it first with his nose. He understood the height change and was close but clean!

Working Equitation United, which is advocating for Morgan and Endo to be allowed to compete, provided the following statement:

The WE United Board of Directors supports the right of horses that have lost sight in both eyes but who have demonstrated they have the capacity to compete safely in working equitation to compete in the sport. Although Endo the Blind is currently the only completely blind horse we know of participating in Working Equitation, the WE United Board voted to add an exception to the new rule in the consolidated Working Equitation rules that would prohibit him and other sightless horses from competing in our events. Endo the Blind and his owner Morgan Wagner have been competing successfully and without incident in the very demanding sport of Working Equitation for the past two and a half years. The two of them have inspired people world-wide with their incredible partnership and ability to overcome physical challenges. In 2016, the two of them finished 5th in the nation at the Intermediate Level in the sport, an accomplishment that underscores that they are not only able to compete in the sport, they are able to be quite competitive!

This consolidation of the rule book has been a major undertaking, and one that all the organizations involved should be proud of. It is a huge step forward for working equitation in the USA, and I am very proud of the leadership which USFWE has provided in helping bring this to fruition – but the work has been done by committee members from each organization working together for the common good.

One of the committee’s goals for this unified rule book has been to bring working equitation in line with the best practices of other equine performance disciplines. I have learned that one of the largest areas of debate and concern within the committee was about allowing bilaterally blind horses to compete. I understand that this issue was researched extensively by the rules committee, which is made up of seven members from all three organizations, each of whom are respected experts in the horse industry. They devoted multiple hours determining what were the best practices in the equine industry regarding bilateral blindness. The committee researched both domestic and international rules relating to blindness in competing horses. I understand that the outcome of this deliberation was that the rules committee voted to not to allow bilaterally blind horses to compete in Working Equitation. This was a responsible decision, consistent with international norms, and grounded in careful review and deliberation. I personally respect the committee members for putting so much effort into this and every other hard decision which they have made.

My understanding is that the committee determined that there is no precedent in any association that governs an equine sport that incorporates obstacles, speed, herding of other animals, and/ or jumping to allow bilaterally blind horses to compete. All horses are required to be sighted in at least one eye. This is due to many factors including horse welfare, safety of the horse, safety of the rider, liability for the event venue, safety of the spectators, and liability for the show sponsor/organizer.

Working equitation is ultimately about working traditions, and most importantly the traditions of working with cattle. Cattle work is ranked as among the top ten most dangerous professions in the United States. The committee wisely determined that working around cattle with a blind horse on a team of riders is neither safe nor fair to the horses and their riders. Each year, many fatalities and thousands of nonfatal injuries occur due to working with livestock. I strongly support the rules committee, their process and professionalism, and their commitment to keeping our sport safe. Unfortunately, at times that may mean that it is necessary to have rules that may not always be popular, but will reasonably protect everyone – horses, riders and other team members – involved in this great sport.

After the release of the new rule book, the following appeared on the Endo the Blind Facebook page:

Weight in, Horse Nation: should blind horses be allowed to compete in working equitation? Should they be barred from competition? Or do you believe there should be a compromise? We welcome civil discussion in the comments section!