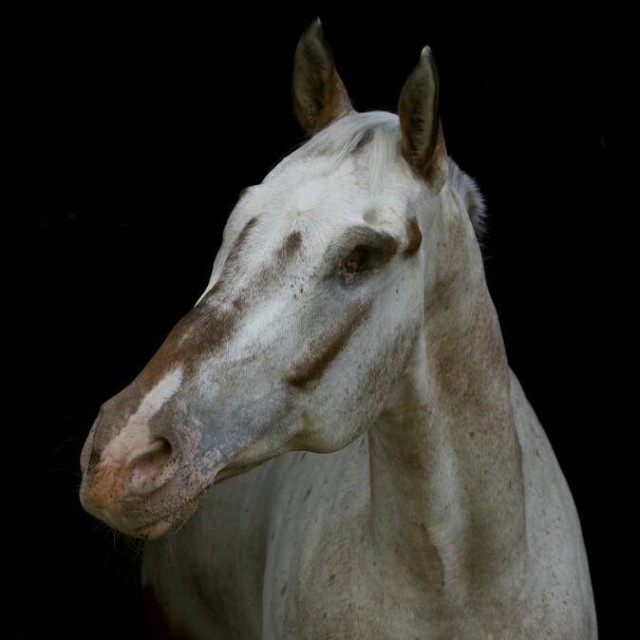 Losing both of his eyes to moon blindness didn’t slow Endo down.

Morgan Wagner has owned Endo for his entire fifteen years when her grandmother said she could keep any horse she wanted. Together, Morgan and Endo compete in working equitation, combining dressage, obstacle and timed obstacle phases, as well as trick training and liberty work. They’ve traveled halfway across the country from their native Oregon and ventured into Canada to compete and perform. But this is a little different from your average “girl meets horse” story — because Endo is totally blind.

Endo had suffered from recurrent uveitis, also known as moon blindness, as well as glaucoma and cataracts for much of his life. His eyes were often painful and swollen, and he was gradually going blind. Moon blindness is common in Appaloosas, and while light cases can be managed, more severe cases may require desperate measures: Endo’s first eye was removed when he was twelve. The second eye was removed six months later.

This is where Morgan and Endo’s story diverges from the expected course: few horsemen would have made the decision to remove both eyes and render the horse totally blind. Most would have chosen euthanasia.

“I honestly didn’t know how he was going handle life without his sight,” Morgan admitted. “But I wanted to give him a chance. I knew that there was a limit where he might have to be to put down if he was unable to cope. Being affected with my own chronic illness, it was difficult to draw the line as to what is a full-quality life.”

Morgan suffers from lupus, and states that the illness has affected every aspect of her life, at one point rendering her into depression when she felt limited on what she could do. Endo, however, seemingly never missed a beat, adjusting within hours of the second surgery and moving around his stall as though he could still see. His ability to adjust to his new conditions encouraged Morgan to do the same, to set goals for her life, and to return to the things she loved.

Endo adjusted to his total blindness quickly in the stall, finding his hay and water almost immediately. Morgan states that he seems to do almost everything by smell, sensing walls, doors and gates alternately open or closed, trees and other obstacles. He always finds food. Endo’s veterinarian recommended that he return to all of his normal activities as soon as possible, so Morgan put him quickly back into training.

It didn’t all go totally smoothly — Endo had a hard time balancing himself in the beginning, and still chooses not to canter or gallop when Morgan is not with him to guide him. He is vocally trained for liberty and trick work, but within the past year Morgan started training Endo in working equitation as well: an impressive feat considering that there are two obstacle phases that include a low jump (which Endo clears with a vocal aid from Morgan.)

This summer, Endo and Morgan traveled to Canada to perform in an equine theater production, as well as two national-level competitions: the Andalusian World Cup in Las Vegas and the Haras Cup in Texas. The most recent trip to Texas in particular was a good learning experience as the competition venue was very noisy: high noise levels take away another of Endo’s key senses, putting his relationship with Morgan to the test. Her top priority is to make sure that Endo and everyone working around him remain safe, so the Haras Cup was a valuable experience for highlighting the partnership’s next goal.

Here’s a video of Morgan and Endo’s performance in Las Vegas at the Andalusian World Cup (must be logged in to Facebook to view.)

ENDO’s STORY.This very special Appaloosa gelding is completely blind, having had to have both of his eyes removed several years ago for medical reasons. Rather than give up on him, his owner/rider/trainer Morgan Wagner redoubled her efforts to help him live a “normal” life. When she was introduced to Working Equitation in December of 2013, she knew that she had found the niche that she wanted to pursue in earnest.Morgan, who has done all of Endo’s training herself, has taught him cues to lift his feet for ascending/descending the bridge. When she learned that WE competitions often include a jump, she spent weeks teaching Endo to jump on voice command, and had thousands of 2014 Andalusian World Cup viewers in tears, as they watched from the stands or tuned into the live video streaming and saw the two of them clear the hay bale jump with plenty of room to spare. WATCH THEM IN ACTION.#IHLH Endo the Blind

Posted by I Hoofing Love Horses on Monday, November 2, 2015

While the pair is looking forward to a little rest and relaxation after all of their travel, we’re willing to bet they won’t be idle long.

Keep up with Endo’s adventures on Facebook. Go Endo, and go riding!