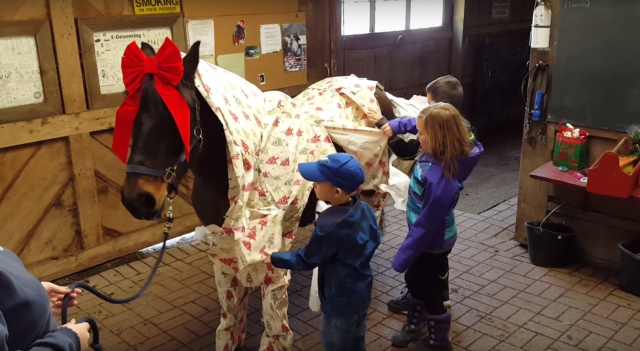 If this was exactly what you were hoping to find under the tree on Christmas morning, don’t worry — you’re not alone.

Because we at Horse Nation are a bunch of crazy horse girls that grew up just slightly, we relate to this video on so many levels: all those Christmases of days gone by, where all we wanted was a pony under the tree. (Don’t believe me? Literally, head editor Leslie Wylie bought herself a mid-life crisis pony specifically because she never got one for Christmas growing up.)

Okay, so this extraordinarily patient, handsome fellow isn’t actually under a tree, but my is he a gentleman to let himself be wrapped and then stand there patiently while his new family unwraps him, snuggles him, learns how to pick up feet and generally surrounds him with organized chaos.

Horse Nation, I present to you: the ultimate Christmas gift.

Can we just say that THIS PONY IS A SAINT. Also, kids are hilarious:

Little brown pony, it looks like you landed in a wonderful family. A Merry Christmas to all of you.