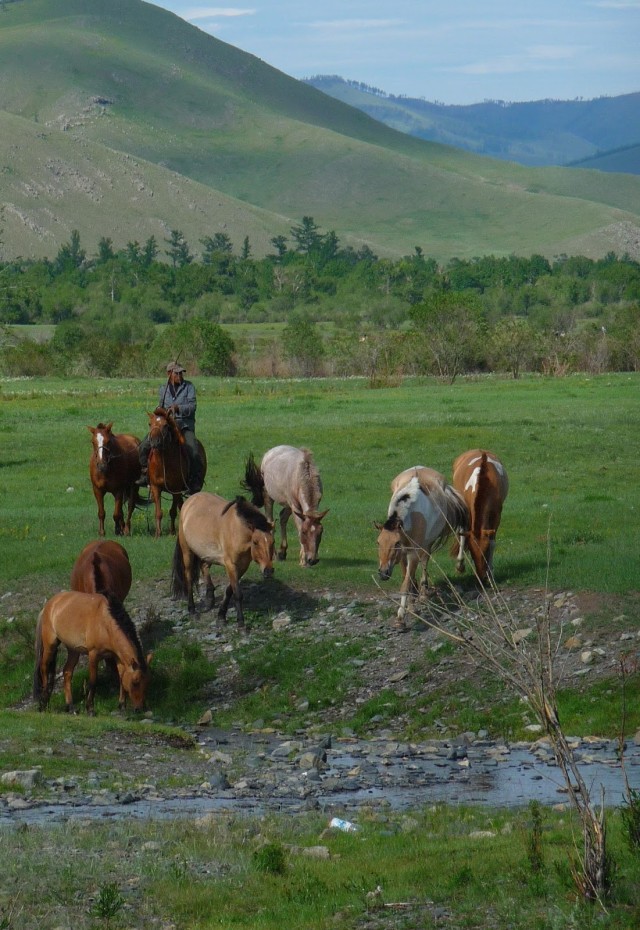 Guest blogger Megan Kiessling views the equestrian world as a series of opportunities — and is documenting her horsey to-do goals in her Muck Bucket List. Like that time she went to Mongolia for a month.

It was about horses around the world, covering topics from the Spanish Riding School to German dressage training. But the last tape was about Mongolia.

I watched that Mongolia tape so many times I swear the film inside was going to wear out. It featured the Naadam Festival which includes trials in the three “manly” sports: archery, wrestling and horse racing. The horse racing portion was over 15km or more depending on the age of the horse, and the jockeys were all kids. Kids my age! It always stuck with me.

Kid in training. All photos by Megan Kiessling.

I didn’t study abroad when I was in college so naturally, after I graduated I went to Mongolia for a month. You know, like ya do.

There are a few things that make Mongolia ideal for the most epic kind of horseback riding. There are no fences, and just one main paved road through the country. We would drive this one road and the bus driver would make a right at some inconspicuous landmark. I asked him once how he knew how to turn and he said the hill looked like a camel so he knew to turn at the next powerline pole. Those are some Dwight Schrute level directions.

Turn left if you hear the bees. Screencap.

It didn’t take long for us to run into horses. This country has horses absolutely everywhere. Seriously, you couldn’t escape them. Everybody rode. Everyone owned one. I was in heaven.

Our first stop on the trip was the Hustai National Preserve, where local Mongolian biologists or ecologists or really smart ologists work with Dutch scientists to reintroduce Przewalski horses into the wild. Locally, they are known as takhi. Also the gift shop at the preserve was wall to wall horses.

We spent an hour watching a presentation from one of the scientists located on site. I wish I had asked him to email it to me, it was that fascinating. It went through repopulation statistics, even comparing them to US wild horse populations. Every horse on the reserve could be sponsored, and when you sponsored them you could name them. And damned if that guy didn’t know every horse’s name. He had what looked like stock photos on his presentation but weren’t, and he went on to rattle off the name of each horse.

Forget the fact that they all kinda look the same…

The biggest problem with the reintroduction is wolves. Wild horses in the US have ten times the survival rate of the Przewalski horses, because US horses don’t really have any natural predators (besides the BLM trying to keep their numbers down and starving to death when the BLM fails. Oh sorry, I tripped over my soapbox there, excuse me).

After the presentation we all piled back into the bus to drive around and look for the little buggers. (Click any thumbnail to open full-size gallery.) 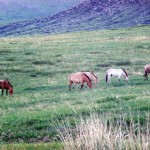 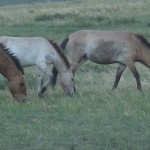 I’m not sure if it was a mixture of jetlag or what but I got really weirdly emotional when we found them. I think what they’re doing there is really good and important, if for no other reason than it just feels right to have these animals back out on the steppes. It didn’t hurt that we ran into one herd that had a foal with them. 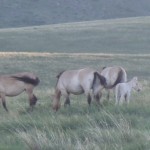 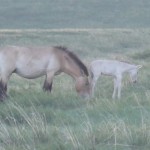 The next horsie specific stop on the trip was an actual horse nirvana called Jalman meadows. Yeah, in between we went into the capital of Ulaanbatar and went to the great dunes of the Gobi Desert but there were limited horses there. 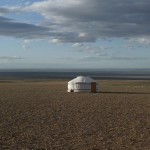 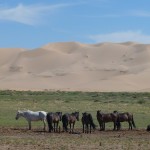 I mean, I did find some. 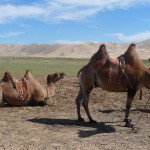 There were camels too though.

Camels yawning is the stuff of nightmares.

I digress. At Jalman Meadows I made friends with the horse master’s apprentice, who was only a couple years younger than me at the time. We went on a half day trail ride together and I think I learned more about Mongolian culture, politics, and language in that four hours than the whole rest of the month long trip. 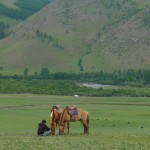 Enjay holds our horses while I peed… in the middle of a field. 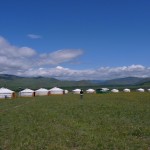 (And by language I mean I made him teach me common Mongolian curse words and of course the only one I remember is the one he told me was the worst and made me promise eight times I would never actually use it.) 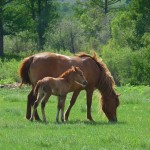 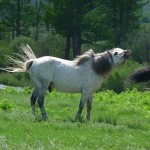 The riding was sublime. There were no fences or gates. The footing was perfect everywhere. All the roads were dirt. He picked two of the fastest horses and we spent the ride either deep in conversation or galloping like wild maniacs. I adored it. Plus the horses had cute names, based on how they looked/acted. From left to right, “Small Gray,” “Lazy Brown” and my mount for the day “Brown and White Spotted.” 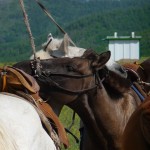 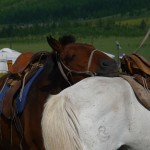 My mount for the day, “Brown and White Spotted”

Finally it was time to head back into the capital for the Naadam Festival. The biggest draw for most people was the wrestling. Being good at wrestling in Mongolia is as big as NFL football players are here. Women are actually allowed to compete in everything except the wrestling, so there was a good mix in the archery and horse racing disciplines. 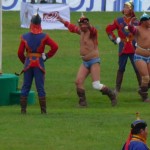 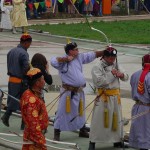 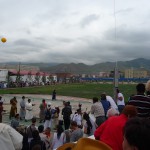 But who cares about that. Where are the horses??? We got to go watch the end of the seven year old race and let me tell you, the kids that do this are bold and look like they were born on the back of a horse. 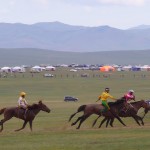 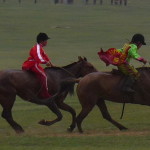 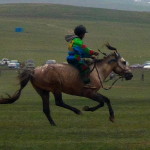 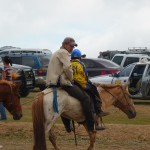 The next day I was watching some wrestling with my roommate. It was so rainy I decided to head back to the hotel on my own to try and warm up and find some semblance of dry. It took ages to try and plow my way through the crowds surrounding the wrestling stadium, especially because they were preparing to do the racing awards ceremony. At one point I was stuck in total gridlock and as the crowd started to part in front of me I could see why; the winners of the race were trying to make it to the stadium and everyone was touching them.

Hundreds of hands were reaching out from the mass of people to brush against the pony’s flank or rider’s leg. Apparently it’s enormously good luck or something? I felt kind of bad for the seven or eight year old kid, totally overwhelmed on the horse’s back, but it was really something to be up close to them.

Somehow no one got kicked. 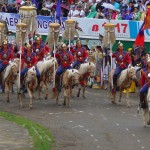 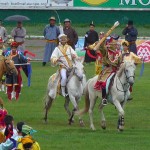 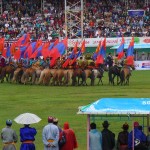 So basically, if you’re obsessed with horses, you should go to a country that was built on the back of one. Plus the beer was insanely cheap, it was $2 for a proper English pint. I highly recommend. 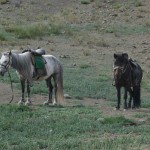 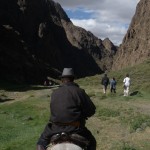 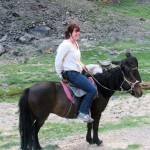 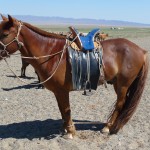