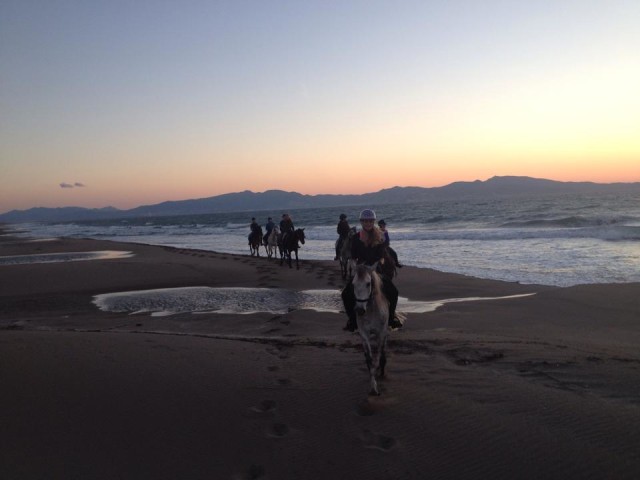 Guest blogger Megan Kiessling views the equestrian world as a series of opportunities — and is documenting her horsey to-do goals in the Muck Bucket List. In the inaugural column, she gets to gallop on the beach (in Spain).

Most riders I know have galloping on the beach on their bucket list. It was definitely on mine. It wasn’t until I sat down to write this that I realized I couldn’t quite put my finger on the allure. Galloping itself is fun, but I think it’s because beaches seem like endless stretches of sand that makes them a particularly hot destination.

I was fortunate enough to spend a week in Spain doing a point to point ride with Equitours. The trip was phenomenal. We were each given a horse that was “ours” for the duration of the week. We were responsible for their care, including grooming, feeding, finding them spots to roll and plenty of carrots. It’s the most time I’ve spent with a horse in a one week stretch maybe ever. My particular mount was a little mutt of a Spanish horse named Café, although I called him Coffee most of the trip.

We rode through fabulous Catalonian countryside and I really took full advantage of the whole “free wine with all the meals” perk. But the real draw for all of us happened in the middle of the week: the gallop on the beach.

Breakfast on beach day was at 4:30 sharp. We had to be on the beach before anyone else was even close to showing up so that meant it all had to be done far too early. My bunkmate Alyssa and I are apparently not morning people, but next door I could hear Stephanie (a German woman in our group) going “GOOD MORNING!!” through the wall. She also had this habit of saying “yoo hoooo!” a lot. And I am going to start doing it even more and bring it home.

Paddocks at the beach. Photo by Megan Kiessling.

Despite the tiredness, and the tiredness leading to the inability to work the coffee machine, we all made it through breakfast and down to the horses in the dark. The slightest hint of blue was on the horizon but we still needed to use the truck lights to see anything. We left the saddle bags in the van as well as the good thick pads and the girth fuzzies. The horses knew something was up: normally we show up at a leisurely 10:30 to bother them. Coffee was beside himself and didn’t stand still for one second while I tacked up.

Once everyone was mounted up, our guide Nacho headed out into the road. The sky was brightening but it was still pretty dark. We trotted right through town, the horses clacking on the pavement of the empty streets. All the lights in the houses were out and only a few flickering streetlights lit the way. You could feel how excited everyone was, horses and riders alike.

We stopped on the last bit of concrete before the soft sand started and Nacho went over the rules. Stay in the line. Stay right up on the horse’s ass in front of you. Don’t stop. Don’t ride in the soft sand. Chase the waves. I was petrified — not that I was going to get hurt but that I was going to bow all four of my horse’s legs. I’ve never ridden on the beach and the sand was deep. They had to work to plow over the dunes to get to the only safe part for galloping: the stretch of the waterline. It was finally appreciably light but the sun still hadn’t breached the horizon.

After a little bit of walking and trotting, Nacho called for a gallop and the line took off. He told us to make sure to keep our heads up and look to the horizon and not at the ground but I was so scared about straying into soft sand that the first few minutes I was looking straight down. The speed of the gallop and the sight of the waves moving in and out in front of me made me INSTANTLY nauseous. I closed my eyes for a second, took a few deep breaths, and said screw it to the sand and to my concerns. They gallop on the beach all the time. Follow the line. It’ll be fine.

And it was so much better than fine.

We were positively flying. Everyone was laughing and whooping. Peeking behind I could see the couple of women galloping behind me with huge smiles on. The horses leaped the waves and the small inlets where water got caught. They snorted against the foam and splashed through shallow water. Coffee was so brave and smart. I stopped worrying about him and appreciated the fact that I was in Spain, on the shore of the Mediterranean, galloping a Spanish horse through the waves.

Our lunch spot for the day. Forreal. Photo by Megan Kiessling.

All too soon our group reached the end of the beach. Nacho slowed his horse and headed towards the beach exit. I expected him to walk off but instead he turned his horse to face the ocean. We all did the same. The sun was finally cresting the horizon. We all took pictures of each other on the beach, exhausted and wet but elated. After we were done taking pictures we just sat there for a few minutes, each of us mentally checking off beach gallop on our bucket lists and watching the sun rise.

Wordlessly Nacho turned his mount and we walked off the beach.

Cafe helping me check one off. Photo by Natalie Mohr.