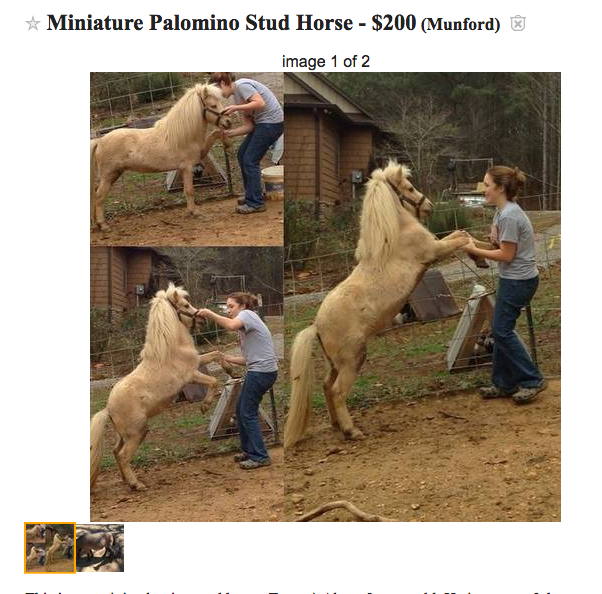 Your favorite cringe-worthy ads, rounded up for your reading … well, “pleasure” might not be the right word but you get the idea.

Best of Craigslist (and Facebook, and equine advertising sites … we don’t discriminate) is a constant treasure trove of the fascinating, the bizarre and the tragically misspelled. We gather the best (and worst) that the internet has to offer and package it up in one neat post for your reading enjoyment.

While it’s fun to giggle at classically atrocious spelling and ridiculous photos, we also remind readers that sometimes Best of Craigslist can lead to fairytale endings as well — where we can, we try to link to the original ad so interested readers can contact the seller.

Okay, enough small talk — let’s dive right in to this train wreck. The whole “sounds like” concept might work well for playing Pictionary, not so much when selling horses. Submitted by Austen:

And again… submitted by Sarah:

7 Yr Old Pacifino mare….very beautiful with thick long mane and tail. She has a very beautiful face with a white star patch on her forehead. She has been under saddle but is still very green to riding. She needs a lot of work before she could be a good trail horse. She likes attention but she is somewhat shy. I’m asking 650 for her or best offer . Please respond by text or email.

Judging from the two-word description below the photo, we guess they mean “buggy” as in vehicle and not as in infested with parasites. Submitted by Joanna:

The mule himself looks like a good upstanding character, but as submitter Erika says, “We get it — he can go anywhere … not sure how that saddle is staying on though!”

This is a really nice gentle mule. You can pick up all 4 feet. He stands still to mount and dismount. Has been used extensively in the Oklahoma City Stock Yards. You can open and shut gates on him. Has 4-wheel drive (Can climb or go over anything). You can pop a whip off of him and he will stand still. Would make a nice working or trail riding mule. He is 14.3 hands tall and 9 years old. Could stand to put on about 50 pounds. Contact if interested.

This horse’s storyline involves a breakup, a gelding that should have happened a long time ago and big giant hope that someone will manage to do right by this animal. Admittedly, this one is less funny, more cringe-worthy. Submitted by Ashley:

This ad is so off-putting that it was submitted twice, by both Erika and Tina:

Well, when you put it like that, who WOULDN’T want this wonderful stallion? Submitted by Ashley:

And we’ll close out with what looks like a GREAT idea. Submitted by Patti:

This is our mini palomino stud horse, Tony. 🙂 About 3 years old. He is so cute & has an adorable personality; especially for a stud! Never tried to hurt women nor children.
Stud fee – $200. One of his foals was just born here on the farm a few weeks ago!