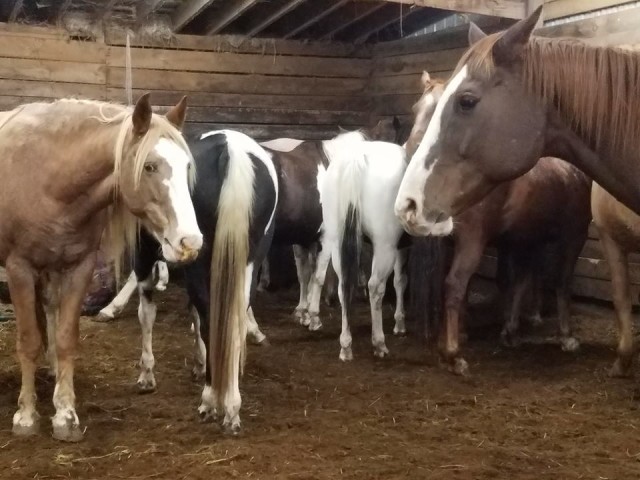 20 slaughter-bound horses survived a trailer wreck on Sunday night, October 23 — but their happy ending is still not guaranteed. HN caught up with rescuer Kelly Smith to share their story.

Some of the 20 surviving horses at their temporary barn. Photo by Kelly Smith.

Interstate 40 East saw a scene of horror on Sunday night when two semi trucks collided: a flatbed semi that had stopped on the shoulder attempted to merge back into traffic, but the driver of a semi bearing 30 horses could not move out of the way in time and struck the merging truck. The trailer was reportedly sliced open; eight horses were killed in the collision and two more had to be humanely euthanized at the scene.

The wrecked truck and trailer were towed with the surviving horses inside to Mascot Stockayrds to safely unload. The truck was bound for Rotz’s Livestock feedlot facility in Shippensburg, Pennsylvania with the horses eventually destined for slaughter in Canada. This is not the first time a Rotz’s Livestock truck has suffered a major incident: in 2013, a truck caught fire due to a leak in the fuel tank and all of the horses in the trailer perished.

Kelly Smith of Omega Horse Rescue has worked with this particular livestock company on many occasions in the past to rescue horses destined for slaughter, and after she learned of the wreck she reached out to inquire about rescuing the twenty survivors. “He was not open to discuss it,” Smith told HN. “So I had to assume that they had already shipped the remaining horses.”

Later in the week on Wednesday, however, Smith headed to the feedlot, intending to purchase other horses, when the staff took her aside. “They said, ‘we have something to tell you,’ and then they proceeded to tell me that they would sell me all of the surviving horses. My options were to agree to buy them on the spot or not at all.”

Fortunately for Smith and the horses, the feedlot has given her a week to come up with the purchase price. “I walked into a situation that I had no idea was about to happen,” Smith stated. “I’m so grateful that we were given the opportunity to save these horses, but I’m also not financially prepared to purchase 20 horses at once.” The cost to purchase the horses is over $13,000.

The horses are off the feedlot, housed temporarily in quarantine but not in a sustainable long-term home. Smith is seeking locations in the immediate area that could safely quarantine a few horses at a time; most of them have upper respiratory infection as well as minor injuries that will need attention. “Overall, however, physically they look okay,” Smith described. “They’re not old, broken-down horses — they’re young, lots of stock breeds, some Quarter horse, some Paint, a draft cross, a large pony.”

Above everything else, Smith stressed, “we need the funds to pay for the horses themselves, their medical needs and their long-term care.” When rehabilitated, the horses will be available for adoption.

Smith also stated that she was more than willing to work with other horse rescues to help save these 20 horses: “We’d be more than happy to work with other rescues that share the same philosophy and values as we do — I have to make sure these horses will never end up in a situation like this ever again.”

The most critical need right now for Smith is funding to cover the “bail cost” to officially rescue these horses. If you would like to make a donation to Omega Equine Rescue to help offset the cost of purchase, click here to open the donations page.

Kelly Smith can be contacted directly at the following:

To learn more about Omega Horse Rescue, please visit the rescue’s website. You can also follow the rescue on Facebook for more updates about the trailer crash horses as well as their other rescues.