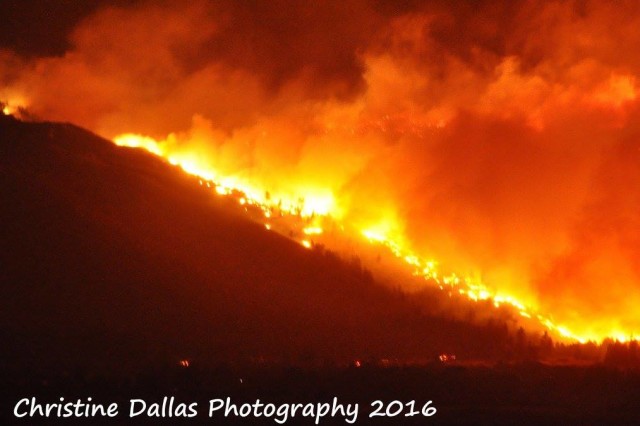 The Little Valley Fire, which started around 1:30 a.m. Friday morning in the Franktown Road area, is currently at 55% containment. At present it has burned 3,460 acres, destroyed 23 homes and 17 out buildings, and wreaked much havoc on residents in Washoe county this weekend (Reno Gazette Journal).

While the cause of the fire is still under investigation, there’s been speculation that it started as a flare up from a controlled burn done earlier in the week. Whatever the cause, with the extremely high winds Reno experienced early Friday morning, the Little Valley Fire quickly spread forcing many to evacuate their homes and livestock.

Adding to the chaos is the fact that Washoe Valley is home to numerous equestrian facilities and farms including Franktown Meadows, Dream Catcher Andalusians, Breakaway Farms, Remolino Ranch, and Equest Training Center, as well as numerous cattle farms and the Canine Rehabilitation Center and Sanctuary. Hundreds of animals were evacuated in the early hours, the trip made all the more hectic given the intense winds — I personally saw at least five semi rigs on Highway 395 that had been blown over — and the unknown time frame.

Initially officials were prohibiting anyone from entering the evacuation area, even to evacuate animals. After much persuasion and I assume some strings pulled by the right people, trailers were allowed to enter to evacuate horses and livestock. Despite the intensity of the situation, the equestrian community does what it does best and pulled together to help one another. There was no shortage of trailers to help move horses nor offers of places to safely take them. This could easily be seen on the Washoe County Horsemen’s Network which had numerous posts offering trailering and space, as well as providing updates on the situation from those still on the road or in the evacuation zone.

So many individuals went above and beyond to make what was necessary happen: One trainer I know was attempting to evacuate a mare from another farm but the mare refused to load. Unfazed this trainer turned and hand walked that mare five miles to her barn. This was not an isolated incident.

Due to the extreme efforts of many (and the large amount of rain that followed the winds and helped contain the fire), a great deal of devastation was avoided — unfortunately though, not all. As noted above, 23 homes and 17 outbuildings were lost. These included small ranches, cabins, and barns as well as at least one larger facility. Local hunter/jumper trainer Ashlin Bowen of Breakaway Farms lost her barn to the blaze as well as a lovely young colt. The Healys, who lived next door to Breakaway, also lost their home and ranch.

In response to these tragedies the local community has rallied. A local hunter/jumper barn, Meadow View, has set up a clothing/supplies drive for all those affected by the fire and local feed store. Julie Winkel and Maplewood Stables are hosting an October show to benefit the rebuild for Breakaway Farms. Sierra Feed and Saddlery is offering replacement supplies and feed at a heavily discounted price to those who lost such in the fire. Additionally, a GoFundMe page has been set up to help Breakaway Farms as they move forward working out the logistics of caring for 15+ horses while trying to rebuild.

Although nothing can erase the devastation, the outpouring of compassion and support makes it all just a little less dark. If you’d like to help out, the GoFundMe page for Breakaway Farms can be found here. Additionally, Meadow View can be contacted here if you have items you’d like to donate.