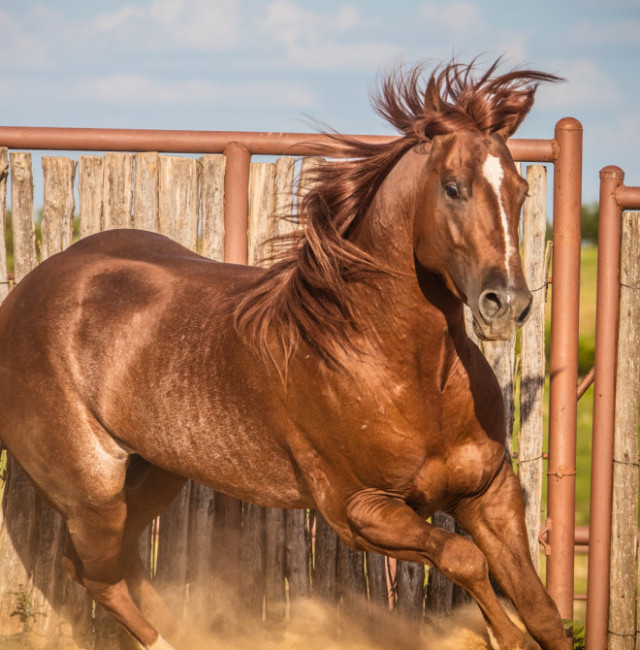 Leading cutting horse sire High Brow Cat is a household name in the western world — his get have earned over $71 million in the show pen and he’s sired eight National Cutting Horse Association, or NCHA, Futurity champions as well as 16 American Quarter Horse Association, or AQHA, champions. His sons and daughters have proven themselves as producers as well, with his bloodlines shaping the cutting horse and cowhorse industry for years and likely more years to come. High Brow Cat continues to “breed” about 100 mares a year through a process called Intracytoplasmic Sperm Injection, or ICSI — a single sperm fertilizes an egg in the lab. His breeding fee is a cool $22,500.

All of this would be plenty of legacy for a horse and his connections to hang their hats on — but High Brow Cat’s story will continue with a new, more unusual chapter: his clone, Copy Cat, will start covering mares of his own in 2017. Copy Cat is a three-year-old genetic replica of High Brow Cat: he carries identical genes to the superstar stallion (though the expression of those genes is different — this is why he is not a visual replica of High Brow Cat).

It should be noted that the AQHA does not recognize clones for registry, and therefore does not recognize the offspring of clones for registry either — none of Copy Cat’s progeny can therefore be considered a registered Quarter horse. (They can be registered with the American DNA Registry.) The NCHA does not hold any restrictions on clones, however, and that’s where Copy Cat’s owner Darren Blanton of Colt Ventures hopes to make his mark in the breeding world. Copy Cat’s introductory stud fee will be $4,000 — significantly lower than High Brow Cat’s ICSI stud fee.

Also of interest is the fact that Copy Cat will not ever be shown: according to administrator responses on High Brow Cat’s Facebook page, his value is in his DNA rather than his performance, and the risk of injury in the show pen is too high to risk that value.

Cloning is not a new concept especially among performance and sporthorse breeders who compete in events where breed registry is not required: many great event horses in particular have been cloned, both for competition and to preserve DNA especially when the original donor was a gelding unable to reproduce. The ethical and scientific discussions on cloning have been lively ever since Dolly the sheep first entered the scene in 1996.

Cloning creates an identical set of genes — it does not, from a genetic standpoint, further develop the breed or the bloodline. It’s sometimes called by critics a “sideways step.” It’s also been hailed as a way to preserve DNA of great value — such as those aforementioned geldings who never covered a mare but displayed great athletic prowess. And in this case, the clone will preserve the DNA of one of the most influential cutting horse sires to grace the industry.

Weigh in with your thoughts in the comments section — what do you think about Copy Cat and the ethics of cloning?