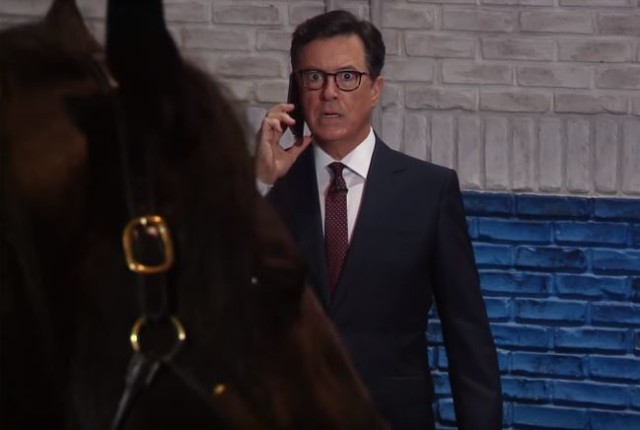 And yes, he did go right into the studio. Watch the clip — and learn more about this weekend’s upcoming Rolex Central Park Horse Show, at which Frederik will be special guest.

Frederik, a Friesian Stallion who we have mentioned here before on Horse Nation, made some legit waves as the final guest Monday night on Late Night with Stephen Colbert. Earlier this year, The Daily Mail declared him the world’s handsomest horse, and for whatever reason, the news reels went totally nuts for it. (Not that we’re complaining.)

Frederick is in New York City as part of the Rolex Central Park Horse Show special events, and he was able to swing by the Ed Sullivan theater to look awesome, promote the show, and be the subject of a slew of highly questionable jokes.

WARNING: Tonight’s show contains dangerous levels of sexy due to guests @prattprattpratt, @scottbakula and the world’s most handsome horse, #FrederikTheGreat. #LSSC A photo posted by Late Show with Stephen Colbert (@colbertlateshow) on Sep 19, 2016 at 11:41am PDT

Tonight, the stars of the dream you never told anyone about, @prattprattpratt @ScottBakula & #FrederikTheGreat! #LSSC pic.twitter.com/PlDuYlw0uK

What happens backstage with the world’s most handsome horse stays backstage, unless you film it. #FrederikTheGreat #LSSC — The Late Show (@colbertlateshow) September 20, 2016

(If you’re a Chris Pratt fan — and you should be — we also highly suggest the first three minutes of this interview in which he and Stephen are pretty much just talking about leaving their wives for a horse.)

And the interview itself was actually pretty marvelous, as Frederick’s owner held her own as she succinctly explained about 800 years worth of Friesian breed history, life as a stud horse, and plugging the Central Park Horse Show — while trying to keep a clearly nervous but still very polite Frederik in hand.

Frederick is just one incredible guest of the Central Park Horse Show, which will feature Grand Prix show jumping and dressage, several Arabian halter and under-saddle classes, special guests like Charlotte Dujardin and Valegro, and plenty of other random special entertainers of the equine variety. You can learn more about the Central Park Horse Show at the show’s website.