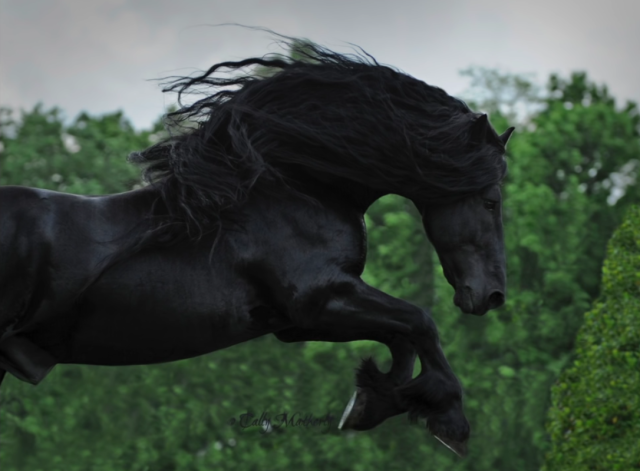 This is not a drill: Meet Frederik, the Most Handsome Horse in the World who is, of course, a Friesian.

The World’s Most Handsome Horse has been named by no higher authority than the Daily Mail.

On what was apparently an appallingly-slow news day, the Daily Mail on Monday published an article speculating that Frederik the Friesian was perhaps the most handsome horse in the world. Within 48 hours, this breaking news had been picked up by other major sources, including The Telegraph, Metro and of course, Us Weekly. Another quick Google search brought up articles at GQ Magazine (GQ???? Really??) and, inexplicably, Weather.com.

I mean, I guess he’s a looker.

Tall, dark and handsome and all that.

And we’ll give Frederik credit where it’s due; he’s not all looks — he is trained through 4th level in dressage and holds dressage and halter titles. As inbreeding is a concern in Friesians, with the entire breed critically endangered at several points in its history, Frederik’s owners at Pinnacle Friesian are proud to note that he has only 1.17% kinship, making him a strong choice as an outcross sire. Frederik is one of the most photographed Friesians in the world, and has in fact even turned down requests to appear on film!

Dressage training, outcrosses, blah blah blah … let’s be honest, he’s just nice to look at. Not that we’re shallow or anything.

And obviously the world itself has fallen under Frederik’s spell. Here are our favorite comments about Frederick from his various social media platforms:

“When I die I want to be cremated , put in a pretty little vile necklace and hang around the neck of a beautiful horse like Frederick for a few days , so I can say I rode with the wind”

“There I am standing beside you my arm around your strong neck muah muah muah , ? oh I’m dreaming too muah Frederick”

“This stallion can trot, canter and gallop with ease;
Makes fillies pine for him and swoon in delight;
When his scent is wafted around by helpful breeze,
To own him, they may even engage in fearful fight.

The sheen of coat and flowing mane make it rare;
Sculpted frame of sinewy horse is unsettlinly strange;
Fillies that stay around him, build castles in the air :
Never mind even if stud fee costs a chunk of change!”

“Frederik, I cannot come this spring to see you. But we will meet someday and you will know who I am before we even meet. Everybody laughs when I say this but….. I know you will know me.”