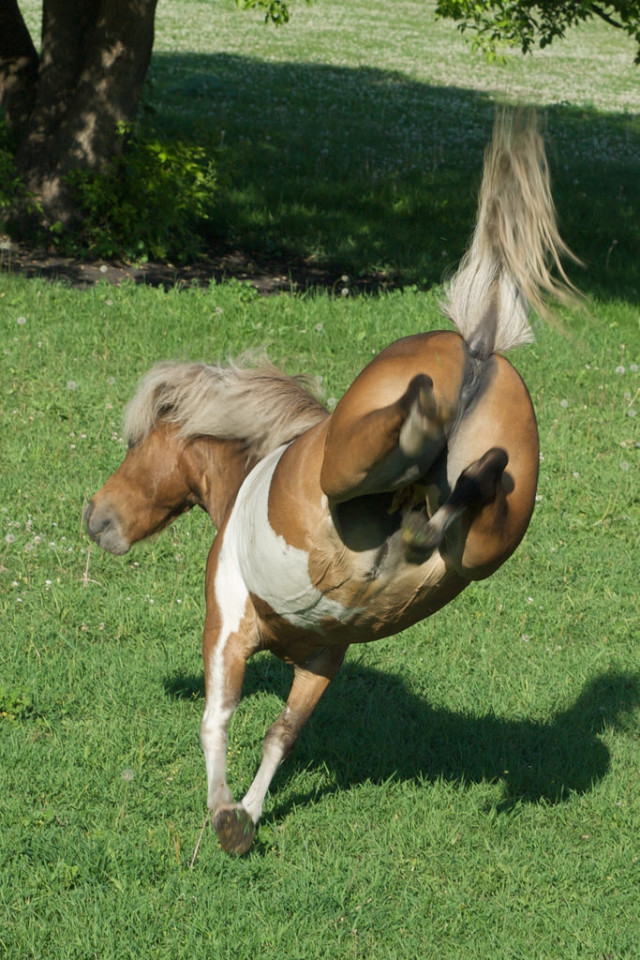 Horses will be horses, and sometimes that involves us humans suffering a horse-related injury — such as getting kicked!

Being kicked by a horse is something any horse person dreads. Unfortunately, almost all of us have been kicked or been close to being kicked if we’ve been around horses long enough.

Here are some of the many reasons horses kick:

If your horse kicks you intentionally, it’s probably for one of two reasons: he’s scared of you, or he doesn’t like you. Sometimes, we just get caught in the wrong place at the wrong time — such as when two horses are getting into it, or a horse kicks up his heels in play.

Getting kicked can result in shattered bones and soft tissue damage, and of course it hurts like heck — emergency room personnel have compared horse kick injuries to the impact of getting hit by a small car moving at 20 miles an hour! A kick to the chest can even cause a person to go into cardiac arrest. That’s a lot of power behind that little hoof!

If you can correct the horse after a kick or attempted kick, do so instantly so he knows what you are correcting him for. It is a very dangerous and very bad habit if kicking is aimed at humans; I’ve heard of horses bought from unreliable sources that get home and reveal a nasty kicking habit.

I remember my first kick fondly: I was volunteering at a local riding stable to learn how to ride (and ride for free). There was a horse there named “Tornado” (his personality matched the tornado-shaped marking on his forehead). Tornado didn’t like to be caught so I tried to help a stable worker catch him. Tornado decided to show me on Day One what horses are capable of: they might not be able to speak English, but they sure know how to communicate! He kicked me in my hip and hand and sent me flying. I fractured both that day, but I held back my tears and went riding anyways. To be that young and dumb again … I’d give anything!

Stay safe, friends, and if you do happen to get kicked may it not leave any lasting impressions! If you have a good story you think we’d all get a “kick” out of, share it in the comments section.