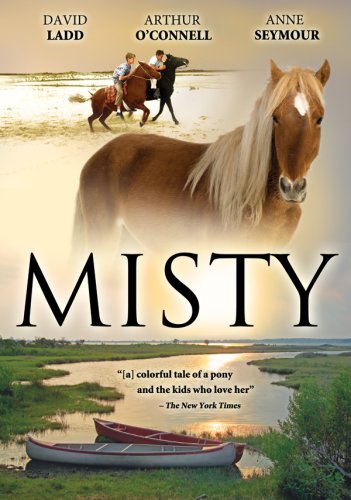 This week we take a look at a movie based on a classic equestrian tale, Misty of Chincoteague.

The film begins with siblings Paul and Maureen Beebe wandering the beach near their grandparent’s home, where they spot a Chincoteague pony named “The Phantom.”

After deciding they’ll buy Phantom at the annual pony penning, they scheme how to make $100 in just four months. First, they gentle their grandfather’s yearlings for sale, and then they collect crabs and clams. After picking up a few other odd jobs, they have their money ready. Paul saddles up to join Grandpa on the roundup. By luck, he’s the one to find Phantom and at her side is a foal he names Misty. The ponies are herded across the water and so begins the festivities.

After a fortuitous lottery, Paul and Maureen come home the proud owners of not one but two horses, Phantom and Misty. Misty takes to her new home immediately, but Phantom longs to be free and return to Assateague Island.

Will they tame Phantom? You’ll just have to watch and see!

This film debuted in 1961 and is based on the 1947 novel, Misty of Chincoteague, by Marguerite Henry. It was filmed entirely on location in Chincoteague and Assateague, casting mostly local people. The real Misty had a cameo in a few scenes, though another unknown pony foal portrayed her character. Misty’s Heaven recounts the true story of Misty, which includes a star-studded affair at the film’s premier where the pony put her hoof imprints in cement like a true Hollywood star.

This movie has the slow pacing and theatrical dialogue of all older films, but it’s still pleasant to watch. The young actors playing Paul and Maureen do a good job of displaying youthful exuberance, even if their lines seem a little stiff at times. I balked at Maureen not being allowed to ride on Pony Penning Day because she was a girl, but the character made me proud when she later claimed rights to riding Phantom in a big race. Paul said they’d flip for it, two out of three.

You tell him, Maureen.

I give Misty 3 Golden Horseshoes.